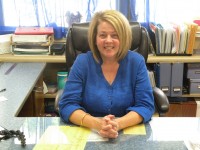 Rebecca Elswerky returns home as principal of Queen of Angels

FORT WAYNE — Being named principal of Queen of Angels School in Fort Wayne is a bit of a homecoming for Rebecca Elswerky.

After graduating from the University of Saint Francis in 1981, Elswerky began her career at Queen of Angels School.

She told Today’s Catholic in an email interview, “Over the next 27 years, I continued in Catholic education at St. Joseph School in Decatur and St. Vincent School, Fort Wayne, with positions in teaching and administration. I then served at the central office level as associate superintendent of personnel. Most recently, my family moved to Lexington, Ky., with my husband’s work. During that time I served as an education consultant and principal for an elementary school in the Diocese of Lexington.”

Elswerky said she is thrilled to be back in Fort Wayne, and “I am especially happy to return to the heart of my mission in Catholic school education, the Diocese of Fort Wayne-South Bend.”

She believes that students are the heart of the Catholic school and parish.

“As principal, I have the honor and opportunity to minister, along with faculty and staff, to students’ spiritual, intellectual and moral development,” she said. “This is an incredible task that is without a doubt rewarding.”

“What excites me about being the principal at Queen of Angels is the fact that this is the very school where my career in Catholic education began,” Elswerky noted. “Being at Queen of Angels is like ‘coming home’ again. Because of this fact, Queen of Angels has always held a special place in my heart. It is an environment that promotes life-long learning and peace building efforts. I look forward to the experience.”

Elswerky explained that her vision for Catholic education is “that as a diocese we continue to offer an exemplary spiritual and academic education for all children.”

“It is our mission to educate students so they may experience a strong faith foundation and experience success in the academic arena,” she said.

“In connection with this statement, it is important to continue to provide for faculty and staff the resources, professional development and support necessary to achieve the task of educating our next generation,” she added.

She is married to Mohamed and the couple has two daughters: Marriam who lives in New York City and works in fashion design; and Noel, a sophomore at Eastern Kentucky University.

Elswerky said she feels blessed with the chance to serve within the Diocese of Fort Wayne-South Bend once again. “I must say after having spent time away, there’s just no place like home,” she noted. “Thank you for the opportunity.” 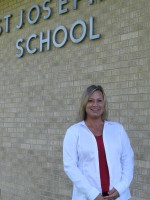 Worman to take the helm at St. Joseph-Hessen Cassel

FORT WAYNE — Rose Worman could not be more thrilled she has been hired as the principal at St. Joseph-Hessen Cassel School in Fort Wayne. With a newly renovated building and new parish priest — Father Bill Kummer — the energetic mother of three feels it is a very exciting time for the school and that God is truly calling her to serve the Hessen Cassel community.

“I felt God calling me in a different direction, a new path. I am looking most forward to meeting the students and families at this wonderful school,” she explained.

Worman will be at the helm of an amazing staff of 13 teachers ranging from impressive tenure to dedicated alumni returning to their alma mater for their teaching careers.

Born and raised the youngest child of Mary Ann Price and Larry Lee, just across the state line in Paulding, Ohio, the avid reader has two older brothers, was active in 4-H and showed horses as a youngster. A graduate of Paulding High School in 1993 where she played basketball, volleyball and ran track, Worman continued her basketball career at the guard position for the black and gold Panthers of Ohio Dominican College in Columbus. She received her bachelor of science degree there before earning her masters in educational leadership and supervision with both a teaching license and building administration license from the University of Dayton.

While working one summer during college at B.F. Goodrich, from which her father later retired, Worman met her husband Ken, who is still at B.F. Goodrich. Ken was born and raised in Fort Wayne where he attended St. Charles Borromeo School and Bishop Dwenger High School. The couple will celebrate their 17th anniversary this month and have been blessed with three children: Makenna, who will be a junior at Bishop Dwenger, Nicholas and Max, who both attend St. Vincent.

Worman’s teaching career began at St. John the Baptist Catholic School in Payne, Ohio, where she taught kindergarten, as well as serving as the physical education and art instructor for seven years.

Instrumental in her decision to follow a career in education was her aunt, life-long mentor, and then principal at the school, Kathy Koenn. “She has been absolutely amazing in my life,” explained Worman of the woman who has inspired her and motivated her since she was a young girl. Koenn is also responsible for encouraging Worman to pursue her master’s degree.

The move to Fort Wayne came when Worman accepted her first administrative position as dean of students at St. Vincent de Paul School in 2008. Before assuming her new role for the 2013-2014 school year, Worman has been busy getting up to speed on the voucher system, reading all about SGO’s and keeping up with Indiana legislation. She has also enjoyed spending time with her family, watching ballgames and swimming during the summer months. The major Cubs fan is counting down to Aug. 4, when the school will hold a meet-and-greet after the 10 a.m. Mass. “I can not wait to get started,” Worman summarized. 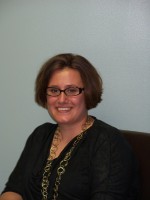 GOSHEN — When students return to school at St. John the Evangelist in a couple of weeks a new principal will be there to greet them.

Mattie Willerton is the new principal and comes from St. Monica’s in Mishawaka. Willerton grew up in Westmont, Ill., a suburb of Chicago, and was raised in Holy Trinity Parish. She met her husband Ryan at Bradley University in Peoria, Ill., where they were both undergraduates.

Her first teaching position was at St. Thaddeus in Joliet, Ill., and that is reportedly where her passion for Catholic education began. In the summer of 1998 the couple moved to Indiana where she began teaching at St. Monica’s and her husband Ryan began work as an administrator at the University of Notre Dame.

The couple has two boys — Jack, 12, and Quinn, 9, who attend Mishawaka Catholic.

At St. Monica’s, Willerton taught language arts for grades 6-8 for 13 years and then for two years taught eighth-grade language arts and social studies. She also served as acting principal during the medical leave of Sister Pat Gavin.

Willerton told of working with Sister Pat, who fostered and encouraged her to get her administrative license and become a principal. Willerton received her master’s in arts in educational administration from the University of Notre Dame through the Alliance for Catholic Education (A.C.E.) program.

“It’s a blessing to be in Indiana,” Mattie said. “I can’t imagine being anywhere else than where we are right now.”

Mattie said that the biggest gift she hopes to bring to St. John the Evangelist School is “to lead them on this journey of immense growth and participating in what St. John’s can bring to the community.”

She said being part of St. John’s being more visible in the community and bringing faith to children is “awesome.”

When asked what challenges she foresees she said, “I think probably to grow at a pace that is manageable while not exceeding the capabilities we have.”

Willerton said another challenge would be to have that growth be meaningful and to ensure that the Church and the faith are constantly being preserved. She also feels to be a partner in the community is very important.

“I think any time there’s a change that can be a challenge — as people we have a tendency to want to do things the way they’ve always been done,” she said. “But that’s a good challenge. St. John’s is great and I get to take that awesome place and make it better.”

She said as far as her administrative style is concerned, her past coworkers have commented and sometimes teased her about her super organization practices. She feels that is strength for an administrator — to have everything in place and know where things are; to be able to plan and think ahead.

“I think that’s a good management skill — to be proactive,” she said.

She added, “I like to be with children and want to be present with them as much as my schedule allows. If not for the children, the school wouldn’t exist. I want to be a principal who knows, loves, cherishes and interacts with students.”

Willerton said she was given an awesome opportunity to go into administration through the A.C.E. program but “children are still a high priority for me.”

She shared her hopes as she takes over this new position. “My biggest hope would be for the students to feel the presence of Jesus in school every day — that they deepen their faith while gaining academics. I want to culturally enrich all students while here at St. John’s — broaden cultural awareness. And one really broad hope is that they become good Catholic young men and women.”

“I feel so blessed to be here now, I’m so excited about the opportunities,” she said. “Honestly, I can’t wait for school to start.”