After 23 years, four migrations, 12,000 miles and many great hardships, this refugee finally has a home.

Imagine the desperation that would drive a person to risk drowning and starvation in an open boat for 25 days at sea and, once he had reached his destination 1,200 miles later, there was a good chance he would be turned away or even imprisoned. Those were the stakes seven years ago when, at age 17, Hamidul Hassan decided to join his brother in Malaysia, where he would finally have a chance at a job.

“We had no food the last five days. Seven of 116 [on the very overcrowded boat] died,” he said, reflecting on the severe trauma of the journey. “I cried out to God every day.” 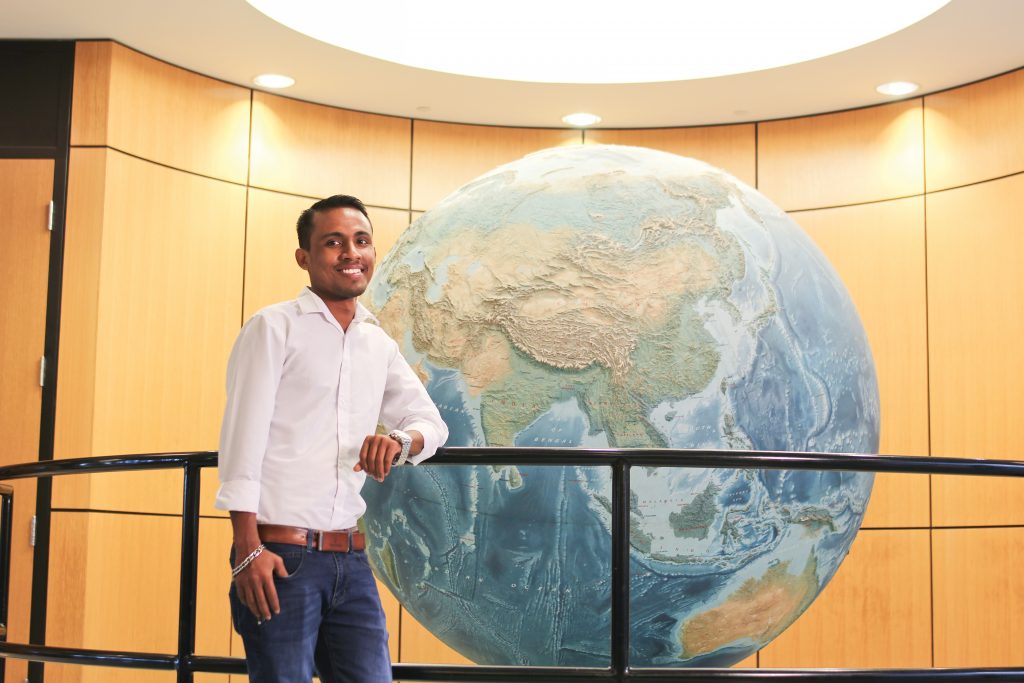 Hamidul Hassan, a U.S. resident who arrived in Fort Wayne following displacement from his native Burma, was the state of Indiana’s representative at the United Nations High Commissioner for Refugees’ annual Refugee Congress in Washington, D.C., in 2016. — Provided by Catholic Charities

Hassan’s appalling experience is typical for the Rohingya, an ethnic minority in eastern Burma. For the past 50 years, they have faced severe persecution by the ruling military junta. The regime declared that the Rohingya were not citizens, even though the group had lived in Burma for centuries and enjoyed citizenship for nearly 20 years after the British left in 1947.

With that declaration, over 800,000 Rohingya effectively became refugees in their own country. They were scapegoated as outsiders and denied education, as well as voting and property rights. They were excluded from government employment and many Rohingya have been killed, solely because of their ethnicity.

Facing such bleak prospects in Burma, Hassan’s family sent him at age 3 to live with a cousin in Bangladesh, a move that was the beginning of a long journey to a place he could finally call home.

Hassan and his fellow refugees found life difficult in Bangladesh. There, they were also treated as outsiders. After he completed the equivalent of high school, Hassan wanted to continue his studies, but was denied access for lack of citizenship. He returned to Burma briefly before the long boat journey to Malaysia.

Once in Malaysia, he tried to pursue his education, but was again denied because he lacked citizenship. Hassan eventually applied for refugee status, a process that took more than three years of paperwork and vetting. Then one day in 2015, he received a chance to come to the United States as a refugee. At age 23, he flew from Malaysia to Fort Wayne, where he would join other Rohingya. His brother followed him a month later.

Thanks to funding from the U.S. Conference of Catholic Bishops, Catholic Charities met Hassan’s basic needs: It helped him learn English, source ethnically appropriate food, arrange health care-related appointments and learn how to use public transportation. Like all refugees, Hassan was eligible to work right away. With the need to repay the U.S. government for his flight and his daily living expenses, he was eager to get to work.

Catholic Charities assisted him with job training and found him employment in a factory. But because he speaks five languages, the most recent of which is English, Hamidul soon landed a job as a translator for Catholic Charities. He works primarily with other Rohingya, for whom he is virtually the only translator in northern Indiana.

In August, the United Nations High Commissioner for Refugees hosted their annual Refugee Congress in Washington, D.C. Each state is allowed one representative to attend, and in 2016 Hassan was selected to represent the state of Indiana. There, he shared his remarkable experiences about his long journey to the United States.

Finally having a place to call home, Hamidul wants to pursue the “American Dream” by continuing his education and one day buying his own home. His next steps are growing in proficiency with English and working toward citizenship.

Reflecting on his trials and now living in the United States, he said, “I am the luckiest man in the world.” When asked if he wants anything else, without hesitation he added, “I want to join the Army. I want to defend the country that has given me so much.”

Nyein Chan is supervisor of refugee resettlement at Catholic Charities in Fort Wayne.