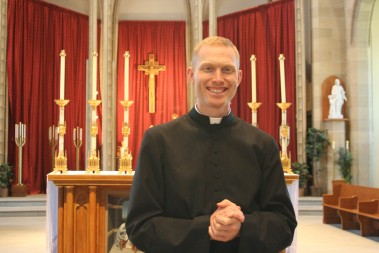 Benjamin Muhlenkamp to be ordained into the priesthood

FORT WAYNE — Just a few years ago, Benjamin Muhlenkamp had big plans for his future — farming, marriage and children. But he now knows God had other plans for him. Deacon Ben Muhlenkamp is preparing for his ordination into the holy priesthood on May 26 at the Cathedral of the Immaculate Conception in Fort Wayne after discerning his future as a priest the past six years at the Pontifical College Josephinum in Columbus, Ohio.

Born in Coldwater, Ohio, in 1982, the third of five children and only son of Gary and Mary Agnes Muhlenkamp, Deacon Muhlenkamp was raised on a dairy farm near Geneva where he learned the value of service. Growing up attending the rural St. Mary of the Presentation Parish in Geneva, Muhlenkamp was active as an altar server and attended catechism classes. But during his youth, he says, his relationship with Christ “didn’t make the top of the list.”

But God was relentless and later as a young adult, while earning his bachelor’s degree in organizational leadership and management at Indiana University-Purdue University in Fort Wayne, Muhlenkamp began in earnest to investigate the faith.

He says, “During this period of time I felt like I was Indiana Jones, discovering unknown secrets, and buried treasure. … I became excited about how beautiful my faith was.”

After attending a college-age retreat he found himself assisting with the youth ministry at St. Vincent de Paul Parish in Fort Wayne, where his nascent devotion rose to the challenge.

As his prayer life expanded, the idea of a vocation came, says Deacon Muhlenkamp, “as I was serving the teens and praying for them in front of the Blessed Sacrament. I felt that I was being invited to the priesthood.”

So after much prayer and encouragement from several priests, he applied to seminary and entered Pontifical College Josephinum in 2006.

Of his formation there he says, “Seminary is the place that we go to fall in love with Jesus. There I was surrounded by men who were also striving to grow in holiness. The class of 13 men that I was with really became close. We have spent many hours together every day these past years, in class, meals, studying and in prayer.”

His assignments as seminarian and later deacon took him to several parishes around the diocese including St. Pius X in Granger, St. Charles Borromeo, St. Vincent de Paul and St. John the Baptist, all in Fort Wayne.

With his interest in metal fabrication, carpentry and fixing farm machinery, Deacon Muhlenkamp’s skills were put to good use as he ministered at each parish he was assigned. He says, “I love the opportunities I get to work with my hands. … My dad always says that you can take the boy from the farm, but you can’t take the farm from the boy. I know that this is true for me.”

In addition to being of assistance to the pastor of each parish with maintenance issues, Deacon Muhlenkamp took the initiative to visit with families and make new friends. His personal and social involvement within the parish has endeared him to many. And following his ordination to the diaconate in May of 2011 Deacon Muhlenkamp has served in a multitude of ways.

“At seminary once you become a deacon, you get a parish assignment, which is so nice. I love helping out at the parish, meeting people, baptizing babies, preparing couples for marriage. I even had the opportunity to form a small Christian community. I just love helping people see the beauty of our faith,” says the enthusiastic priest-to-be.

Deacon Muhlenkamp’s hope for his future as a diocescan priest?

“I just look forward to praying the Mass, hearing Confessions and offering time for Eucharistic Exposition in the parish I get placed,” he says. “I also look forward to spending time with the priests of our diocese and learning from them. … I am amazed at what the Lord will do through these hands.”