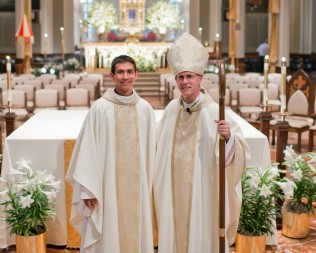 NOTRE DAME — Matthew C. Kuczora’s whirlwind month that began with assisting at a papal Mass in Mexico culminated this past Saturday afternoon, April 7, with his ordination to the Priesthood at the Basilica of the Sacred Heart on the campus of the University of Notre Dame.

As he stood before Bishop Kevin C. Rhoades, who conferred the Sacrament of Holy Orders, Kuczora radiated pure joy as family and friends prayed and sang in both English and Spanish. Over 100 Holy Cross priests concelebrated the Mass, welcoming their brother to the Congregation of Holy Cross.

For the past year Kuczora has served at Nuestra Madre Santísima de la Luz Parish, a Holy Cross parish in Guadalupe, Nuevo Leon, Mexico. He has also been serving as director of postulants, a program to provide candidates with an introduction to the history, spirituality, charism, life and work of the Congregation of Holy Cross.

“We have seen in this very joyful and service-oriented young man, someone who desires to give himself completely to God and His call to be a priest,” said Mario Alvarez Guterra in Spanish, with translation provided by Holy Cross Father John Herman, pastor of La Luz. “We see Deacon Matt persevering day after day, tending the Kingdom of God by bringing the Word of God and the love of God to people in great need, people who have fallen away from God.”

Mirthala Romero Mata shared more testimony on behalf of the parish. “We know that you will be a star of Bethlehem as a priest, and there will be many men and women who are brought closer to God, through the presence of Jesus who you know, love and serve. We love you very much!”

Bishop Rhoades addressed the presenters in Spanish, thanking them and welcoming them to the United States, before confirming to the entire assembly, “We choose Matthew for the order of priesthood!”

In his homily, Bishop Rhoades reflected upon three duties of the holy priesthood: to scatter the seed of God’s Word; to dispense God’s mercy; and to nourish the faithful with the Eucharist. To effectively preach, he said, the priest must first live on the Word of God in his own life and be a man of prayer.

“The time we spend in prayer is not wasted time,” said Bishop Rhoades, referring to private prayer, Eucharistic Adoration, the Liturgy of the Hours, “lectio divina,” the rosary and other ways a priest must continually replenish his spiritual engine if he is to serve his people well.

“We must never seek to take center stage,” Bishop Rhoades said. “We are servants when we celebrate the Eucharist, servants of the liturgy who point to the great High Priest, to Jesus, who gives Himself to us ever anew in the Blessed Sacrament.”

Bishop Rhoades also drew on the image of the vine and branches, an image so often used by Holy Cross founder Blessed Basil Anthony Moreau.

“Your holy founder applied the figure of the vine and the branches to the Holy Cross community,” Bishop Rhoades said. “We must also apply it to priestly life and ministry. Jesus said, ‘I am the vine, you are the branches. He who lives in Me and I in him, will produce abundantly, for apart from Me you can do nothing.’”

Bishop Rhoades concluded his homily and said, “God calls you to follow Him in a new way as He makes you the living instrument of His Son, the Eternal High Priest.”

Kuczora then promised to assume the responsibilities of the office of presbyter and his obedience to his local ordinary. As the candidate lay prostrate upon the basilica floor, Bishop Rhoades led those assembled in reverent prayer, asking God’s blessing through the intercession of the communion of saints, beautifully sung by the Notre Dame Folk Choir.

Kuczora then knelt facing the altar, Bishop Rhoades laid hands upon him, and the 108 assembled priests silently and reverently followed suit. The newly ordained Father Kuczora was then vested and his hands anointed. He smiled broadly as his family brought the gifts of bread and wine to the altar, and the celebration of the Eucharist continued.

“It’s very overwhelming,” Father Kuczora’s mother, Pam, shared afterward. “I’m a convert, so I never dreamt my son would become a priest. I’ve always prayed for my children’s spouses, ever since they were babies, so I guess I’ve been praying for the Church. I feel very blessed. It’s a miracle, … it’s the Holy Spirit!”

Neither Pam nor husband Paul had any indication their son was destined for the priesthood. He always had a girlfriend and never expressed interest in religious life until his junior year of college. It wasn’t until after college that Kuczora knew he had a priestly vocation.

“I thought I’d serve the Church as a dad and a husband,” grinned Father Kuczora later at the reception. “Then I started looking at things I really liked and things I’m good at, and meeting these guys at Holy Cross I realized I could combine a lot of my joys together, and do it with a lot of love for the people who really need it the most.”

“It’s been six years of formation, with a lot of learning, struggles and blessings along the way,” he recalled. “I think especially this last year of being a deacon and being with my people in my parish down in Mexico … just knowing now that I can anoint them, hear their confessions and offer Mass for them is really powerful for me.”

Father Kuczora also credits the genuine joy he witnessed from the Holy Cross priests during his college years.

“I had good priests growing up, but it was the guys here at Notre Dame — the Holy Cross priests and brothers — that really inspired me.”

Father Kuczora, who will soon return to serve in Mexico, celebrated his first Mass — a Mass of Thanksgiving — on Divine Mercy Sunday, at the Basilica of the Sacred Heart.