“Viva Katharina! Viva Katharina!” came the cry from the choir loft, concluding the celebration of a Mass of Thanksgiving for the Canonization of St. Katharina Kasper on Sunday, Nov. 4. Sister Carole Langhauser, PHJC, led the shouts of joy, accompanying them with two hand bells.

For the Poor Handmaids of Jesus Christ, the canonization of their foundress, Mother Maria Katharina Kasper, is a confirmation of what they knew and believed. Their gratitude stemmed from the universal Church recognizing God’s goodness as manifested in her, and sharing St. Katharina with the world.

Bishop Kevin C. Rhoades celebrated the Mass, concelebrating with Bishop Timothy Doherty of the Diocese of Lafayette-in-Indiana, along with a Spiritan priest from Nigeria, Father Matthias Alonyenu, C.S.Sp., chaplain of the PHJC motherhouse in Ancilla Domini Chapel, Donaldson. The PHJC congregation observed its 150th anniversary of serving God’s people this summer.

St. Katharina was canonized on Oct. 14 in St. Peter’s Square in Rome, Italy, along with six other holy men and women of great charity. One of them was Pope Paul VI, who had beatified St. Katharina in 1978. “I don’t know if there has ever been a canonization of a pope along with someone he had beatified,” Bishop Rhoades said during his homily. 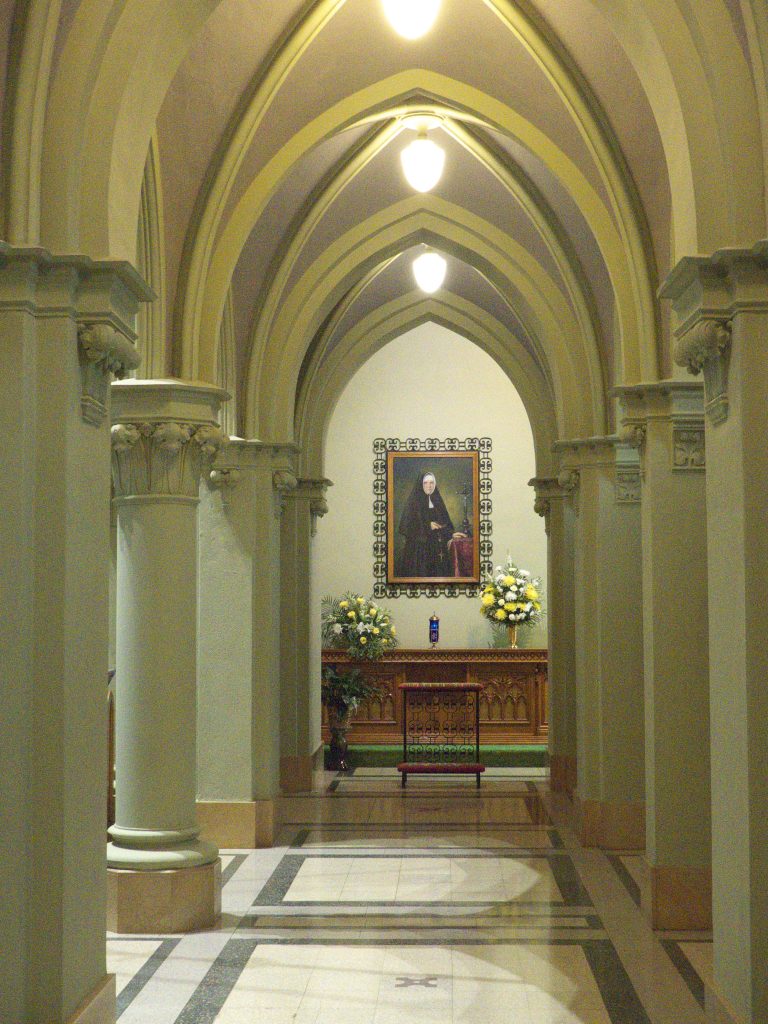 A portrait of St. Katharina Kasper, foundress of the Poor Handmaids of Jesus Christ, hangs on the back wall of the Ancilla Domini Chapel in Donaldson. St. Katharina was canonized on Oct. 14 by Pope Francis at the same time as the canonization of Pope Paul VI. — Bob List

Bishop Rhoades explained how St. Paul VI spoke of her “as a model above all of fidelity and responsibility in the small and insignificant duties of each day. She once said: ‘All is great that is done in God’s love; nothing done for God is small.’ This is good for all of us, bishop, priest, religious or lay person, to remember.”

‘Love your neighbor as yourself’

The Gospel reading for the 31st Sunday in Ordinary Time aptly described St. Katharina’s ministry; a “love for God put into action through charity towards our neighbor.”

“What a beautiful example she is of today’s Gospel,” Bishop Rhoades preached. “Answering the question of the scribe about which is the first of all of the commandments, Jesus recites the Shema Israel that we heard in the first reading from the book of Deuteronomy. … And then our Lord adds to this a commandment from the book of Leviticus: ‘You shall love your neighbor as yourself.’

The Shema is the core, daily prayer that every faithful Jew prays, from Jesus’ time to the present day.

“Jesus is the first one known to have explicitly combined these two commandments, showing us that they are inseparable.” … St. Katharina knew that.

“As Pope Paul VI said at her beatification: Mother Mary Catherine’s great love for God was expressed in her unlimited love of neighbor,” Bishop Rhoades explained.

“Today’s readings remind us of the centrality of love in both the faith of Israel and in the Christian faith,” he continued. “There is new depth and breadth, however, with the coming of Christ. There is new depth because ‘God so loved the world that He gave His only Son…’ (John 3:16). There is new depth in that the one God professed by Israel now has a human face. ‘The Word became flesh and dwelt among us’ (John 1:14). And there is new breadth in that Jesus united into a single precept the commandment of love for God and love for neighbor, making them inseparable.”

Before the close of Mass, Bishop Rhoades blessed the faithful with her relic, a piece of her finger bone. Then he blessed with holy water special prayer cards and medallions.

A life that reflected God’s goodness 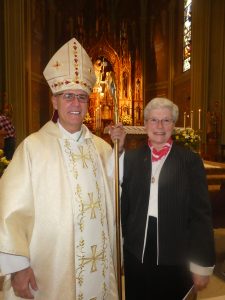 The provincial of the Poor Handmaids of Jesus Christ, Sister Judith Diltz, expressed gratitude that the world now recognized the holiness of Katharina Kasper, “whom we lovingly call Mother Mary.”

“As we share our joy in following her footsteps, as we share with the Church and the world what we know of her holiness, we find that this canonization is also an opportunity to look again, to look anew, at her life and to discover previously unseen gifts and virtues,” Sister Judith said.

She asked those present to share their experiences of “how you hear her speaking to you of God’s presence and love, and the call for each of us to make God more present in our world. Share what virtues you find in her that speak to be imitated. Such sharing will make this canonization truly a Churchwide event. Our mutual sharing of insights of St. Katharina will plant seeds that will grow into new ways of appreciating our new saint and appreciating our great God, who is the source of all goodness.”

Present at the Mass were members of St. Katharina’s family: Norma Vollmer Thiman and Jan Glasser Burke of Louisville, Kentucky, her nieces. The new saint is also Thiman’s great-grandmother’s godmother.

Thiman spoke of her family coming to southern Indiana from Germany, and the family’s “stubborn streak” that St. Katharina must have had to follow God’s will and start a new order of women religious.

“We all have that potential in us, and it all comes down to the choices we make,” Thiman reflected.

The life of St. Katharina Kasper

St. Katharina Kasper was born May 26, 1820, to Heinrich and Katharina Fassel in Derbach, Germany. The poor and devout peasant family farmed on the country’s west side. She was the eighth child of the Kaspers. 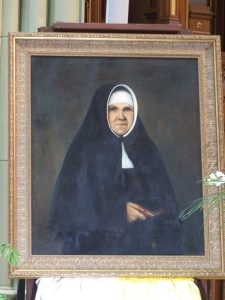 As a child, Katharina had an incredible love and devotion of God. She loved to read, most especially the Bible and a copy of the “Imitation of Christ” by Thomas à Kempis. She displayed an extroverted personality, attentiveness to others and  strong moral character, and enjoyed traveling to a nearby Marian shrine, Our Lady of Heilborn, with her mother. They often took other children with them, singing songs and sharing stories about Jesus and Mary.

She began small acts of charity in her village even as a young girl and early on felt called to the consecrated life. Her father died when she was 21 and the family’s fortune and possessions were given to the children of his first wife, Anna Margaret Kasper, according to German law at the time. Her brother died shortly afterward and Katharina with her mother, although only 56 years old but in poor health, had to rent at a house of Mattias Mueller. Katharina was hired out for 10 cents a day to work as a farm hand. She also sold cloth weavings and split stones for road construction to support her family. Her hard work and ordinary, simple acts of charity inspired other villagers. Kasper later gathered with other like-minded woman in a “little house” to pray and read the Bible, as well as nursing the sick and caring for children.

After her mother died, with the encouragement of her spiritual director, Katharina and four other women formed a religious community, the Poor Handmaids of Jesus Christ. While she might have preferred joining an established order, there were no female religious congregations for poor women in her area to join, so she had to start her own. Katharina looked to Mary, as the first handmaid as her model. Like Mary, she listened attentively to the Spirit and responded with courage to the will of God. These “Dernbach Sisters” entered religious life, taking a habit and pronouncing public vows of poverty, chastity, and obedience on Aug. 15, 1851, to Bishop Peter Joseph Blum of Limburg, who had accompanied them along the way.

They quickly attracted other women and the order spread to the nearby Low Countries. Just 17 short years after their founding, the PHJC order received a letter from the then-wilderness of Indiana.

In the aftermath of the Civil War, the bishop of Fort Wayne wrote to Mother Maria Katharina, petitioning her to send sisters to minister to the German immigrants who had settled there. She sent eight sisters, selected from the hundreds who eagerly volunteered, to serve the immigrants of Indiana. They worked at Hessen Cassel, serving the parish church, running a school and establishing their first hospital in America, St. Joseph Hospital in Fort Wayne, within a year of their arrival.

In 1875, the sisters were asked to go to Chicago to establish an orphanage for poor children. They established a hospital there and took care of patients with smallpox, Spanish influenza and tuberculosis, which were major threats to the community. They took care of many; one among them was a woman named Mrs. Gluntz, of Chicago. Later, in 1918, Mr. Gluntz sold the PHJC order his hotel property on a beautiful 63 acres of land in Donaldson on Lake Gilbraith. The new space was used for retreats and the establishment of the order’s motherhouse. It is now also the home of Lindenwood Retreat and Conference Center, Ancilla College and a retirement home.

On June 1, 1870, the Vatican endorsed and confirmed the congregation. Mother Maria Katharina became the first superior general of the Poor Handmaids of Jesus Christ and served five terms.

On May 21, 1890, the congregation received the final approval of its constitutions from Pope Leo XIII. However, even before the final approvals from Rome, the Poor Handmaids attracted followers and spread their ministry outside Germany to England, the Netherlands, India, Mexico, Brazil, Kenya, Nigeria and the United States.

Mother Maria Katharina suffered a heart attack on Jan. 27, 1898, and died in the congregation’s Dernbach Motherhouse at dawn on the feast of the Presentation, Feb. 2. At St. Katharina’s death, there were 1,725 women religious.