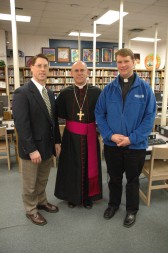 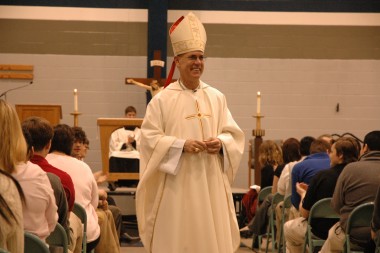 The visit got underway with a Mass in the Bishop Crowley Activity Center, where Bishop Rhoades expressed contentment at being back at the school and at being able to celebrate Mass with the young people.

Lent’s traditional vestment color, purple, gave way to white for the all-school liturgy: the reason being, the bishop explained, that Friday was the feast of the Chair of St. Peter.

“On this feast day we are reminded that the pope is the prince of the Church, the visible heart of our faith, and that his ministry continues now in the 21st century,” he said.

As Pope Benedict’s impending resignation draws near, Bishop Rhoades encouraged worshippers to remember how he served the Church with zeal and bore “a beautiful witness to Christ. On the Mass of the Chair of St. Peter, we pray for his successor.”

Friday’s Gospel reading, Matthew 16:13-19, clearly establishes the Church’s leadership and would have had also had a great impact on the residents of Caesarea Philippi, where the disciples and Jesus found themselves at that time. Worship of the pagan god Pan was pervasive in that region, and Pan’s temple was even thought to house the gate to the netherworld.

“So when Jesus said that not even the gates of the netherworld would prevail against His Church, that’s a reference that they would have taken very, very seriously,” Bishop Rhoades said during the homily.

By confessing that Jesus was the Son of God and not just a prophet, as some thought, Peter proclaimed something that gets to the very heart of the Catholic faith.

“Remember, people were waiting for a Messiah … they still remembered that promise. When he said ‘You are the Christ’ and then, ‘You are the Son of the Living God,’ he really was inspired to say that. And then Jesus said something just as incredible: You are Peter, and on this rock I will build My Church.”

With the changing of Peter’s name, Bishop Rhoades continued, Jesus made Peter the foundation of a new building. That building is the Church, and that Church is the body of Christ.

By establishing Peter as His successor here on earth, Jesus also established the Church’s Tradition of apostolic succession. The throne of St. Peter represents the pope’s and, in local dioceses, the bishops’ ecclesial authority.

“There are 1.2 billion Catholics in the world. How do we stay united? It’s because Jesus set up this succession. Jesus gave us the means to preserve that unity in our faith.

“In six days that chair will be vacant. That’s a tough time. We’re used to having a pope,” he admitted.

In detail, Bishop Rhoades laid out for students the nuances of the process of choosing the person who will take Pope Benedict’s place as the keeper of the keys to the kingdom; pausing after the homily to take questions from the student body about resignation and the upcoming election. Afterwards, he continued the celebration of the Holy Mass with concelebrants Father Barry England of St. Bavo Parish and Mishawaka Catholic Schools, Father Bill Sullivan of St. Thomas the Apostle Parish and school in Elkhart, and with Father Jacob Runyon, Marian High School chaplain and parochial vicar of St. Matthew Cathedral in South Bend.

Prior to the final blessing, Bishop Rhoades took additional questions of both a spiritual and entertaining nature from the students. One young man took the opportunity to ask if he intended to maintain a tradition established by former Bishop Emeritus John M. D’Arcy of allowing all the students of a school whose team won a state championship to have a day off in celebration. The request met with riotous applause because Marian’s girls soccer team recently dominated the IHSAA state soccer championship. He received the bishop’s promise that the request would be considered.

As a token of respect and appreciation for his visit, Brendan Short presented the bishop with a spiritual bouquet, Marian spirit wear and a photo of him with students who participated in a recent March for Life. Representatives of First Source Bank were in attendance as well and gave the school a check for $25,000 to support its mission.

Before concluding his pastoral visit, Bishop Rhoades met with Marian High School theology classes and with students who are considering religious vocations.