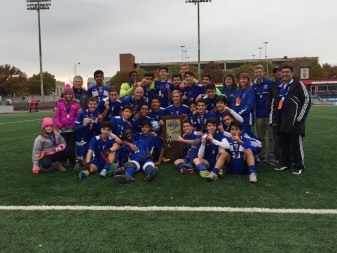 INDIANAPOLIS — As youngsters around the Midwest dressed as ghosts, goblins and popular minions, there was a group of 26 from Marian High School that were adorned in blue and silver brandishing tricks hoping to receive the biggest treat to be given on this holiday, an Indiana state boys’ soccer title.

Instead on coming home with a pillow case full of candy the Knights of Marian brought back to Mishawaka a trophy that would be a testament of teamwork and perseverance for the ages as they accomplished the ultimate goal by winning their first state championship in boys soccer.

“I’m so excited for the kids,” commented long-time Coach Ben Householter. “I never expected it, I knew we were talented and had a great group of guys but this is surreal.”

“Marian has been blessed with some good teams in the past, but an injury here, a penalty there and some bad luck can result in a loss on the long road to state,” impressed Householter. “I think that some of last season’s disappointment drove our players to work harder and remain focused.”

The first game of the sectional may have been the biggest hurdle for the Knights as they surpassed Bethany Christian, 1-0, in a highly contested match.

“The boys took the Bethany game as a warning signal of what can happen in the tournament,” remarked Householter. “After that game, we really regained our focus and got on a roll.”

The next big challenge would be in the regional semi-finals as goalkeeper Michael Cataldo stepped up and the victorious Knights won on penalty kicks in overtime to an impressive Boon Grove squad.

“Semi-state was another good day for us,” explained Householter. “We lost a couple of defenders in the morning to injury and a couple of sophomores filled in and claimed the night-cap by allowing just two shots on goal.”

“The foursome I’m the most proud of are the seniors: forward Augie Hartnagel, defender Christian Verstraete and midfielders Richie Ontiveros and Kevin Villa-Torres,” added Householter. “They all took the younger players under their wings, worked with them and encouraged them and strengthened all three areas of the field.”

The Knights’ story was that of domination as through the state tournament as they scored 30 goals to their opponents three including five shutouts along the way.

“It took all the efforts of the players that have gone through our program over the years to get to this pinnacle,” stated the most-winning coach in Marian soccer history. “I’ve been coaching here for 18 seasons and the numbers of former players on hand for the championship game humbles me, we even had one from our first campaign in attendance”

With no other games to play, the Knights capped their magical run with a school best 20-2 record, a share on the Northern Indiana Conference Title and the biggest treat of all.

“Honestly, it still hasn’t hit me yet,” proclaimed Householter. “I guess next is a little R&R and then back to being a dad and a husband.”