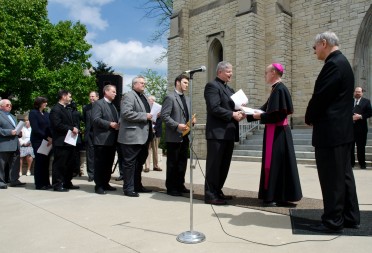 Ministers and representatives of the Lutheran Church-Missouri Synod present 112 letters with 1,396 signatures in support of Bishop Kevin C. Rhoades and Catholics to “stand together for religious liberty” at a gathering on the plaza of the Cathedral of the Immaculate Conception in Fort Wayne on April 17. Msgr. Robert Schulte, rector of the cathedral and diocesan chancellor, stands at the right.

FORT WAYNE — Church leaders, students and members of the Lutheran Church-Missouri Synod congregations in Fort Wayne expressed their solidarity with Bishop Kevin C. Rhoades and Catholics of the Diocese of Fort Wayne-South Bend to “stand together for religious liberty.”

Gathering April 17 at St. Paul Lutheran Church, just a few blocks from the Cathedral of the Immaculate Conception in downtown Fort Wayne, Lutheran Church-Missouri Synod held a procession to the cathedral. There they gathered in prayer and song with Catholics and Bishop Kevin C. Rhoades on the plaza in front of the cathedral and presented letters of support and encouragement “as we stand together with (the bishop) on this issue of religious liberty,” noted Rev. Charles Gieschen, academic dean of Concordia Theological Seminary in Fort Wayne, one of two Lutheran Church-Missouri Synod seminaries in the U.S.

Gieschen shared encouragement from the Lutheran Church-Missouri Synod, “with our brothers and sisters in Christ, these letters and these signatures and also to assure them of our prayers in light of the recent U.S. Department Health and Human Services mandate.”

Rev. Daniel P. May, president of the Indiana District of the Lutheran Church-Missouri Synod, announced at the presentation, “We are gathered here today to stand in defense of the religious liberty and freedom of conscience that individuals and institutions should enjoy unobstructed by government intrusion or coercion as guaranteed by the Constitution of the United States of America.”

“We understand our spiritual and civil responsibilities and we cherish the role each plays in the health and well-being of this nation,” Rev. May said. “As American Christians we give proper honor and respect to those in authority. We always pray for our leaders. We strive to obediently carry out our responsibilities. We pledge our allegiance to the United States of America, but our higher and greater allegiance is to the King of Kings and the Lord of Lords.”

Rev. May said the Lutheran Church-Missouri Synod representatives and other leaders were there to “demonstrate against the erosion of our civil liberty.”

“We stand with those working for the continued freedom to act according to the principles of faith and conscience as they care for their fellow man and cherish society’s most vulnerable without being discriminated against by government mandates,” he said. “To require religious organizations to provide these services violates consciences and principles of religious liberty as they are guaranteed by the U.S. Constitution.”

The history and heart of America is that citizens are free to follow their consciences in matters of faith. “We urge our leaders to honor and respect this liberty, so that together we may be a nation that is under God and a shining light on the hill,” Rev. May said.

“In the end we are conscience-bound to obey God rather than man,” Rev. May said.

Dr. Gieschen read a statement posted on the Concordia Theological Seminary website on how to respond to the mandate: “For one, we must stand in solidarity with those under assault. We must support those who put themselves on the line in defense of this liberty. While we do this, we will continue to be good citizens.”

“That is what we are doing today, Bishop Rhoades,” Gieschen announced, “standing peacefully, with those under assault, and continuing to be good citizens, to pray for our leaders who serve in our communities.”

“Even as the Lutheran faculty and students of Concordia Theological Seminary have peacefully stood and walked with Roman Catholics in this community for many years in upholding the sanctity of human life, we again stand with you on the issue of protecting the free exercise of religion in our great nation so that Christians may be about the mission that Christ has given to His Church,” Gieschen said.

“Your gesture of solidarity with the Catholic Church in the defense of our religious liberty is a beautiful witness for which I am deeply grateful,” Bishop Rhoades said. “Your letters of support and your public testimony highlight the importance of defending our first and most cherished liberty as American citizens.”

Bishop Rhoades has championed religious freedom rights since the Obama administration announced the Health and Human Services’ mandate requiring Catholic institutions to cover contraceptive drugs, sterilization and abortifacient drugs in its insurance plans for its employees.

“We are rightly worried that religious liberty in our country is being weakened,” Bishop Rhoades said. “The most glaring example of this is the mandate of the Department of Health and Human Services, an unprecedented coercive action by the federal government to force religious institutions and individuals to facilitate and to fund products that are contrary to our moral teaching.”

“It is also appalling that the government purports to define which of our religious institutions are ‘religious enough’ to merit protection of their religious liberty,” Bishop Rhoades added in his remarks. “Because we serve and employ people of different faiths in these institutions, they have been deemed non-exempt from the government’s mandate.”

Bishop Rhoades noted that when the Church helps the poor, educates young people or cares for the sick, “we do not restrict our service to those who are Catholic or Lutheran. If we did, we would not be subject to the mandate.”

“In effect, the government is dismissing our liberty when we are engaged beyond the sanctuaries of our churches and doing the good works our faith calls us to do, contributing to the common good,” Bishop Rhoades said.

“Religious liberty is more than freedom of worship — it includes the freedom to practice our faith in society without coercion from the government to violate our consciences,” he said.

Bishop Rhoades encouraged those gathered: “We must stand together in defense of our first liberty, which is enshrined in the very First Amendment of our Constitution, which indeed guarantees that ‘Congress shall make no law respecting an establishment of religion, or prohibiting the free exercise thereof.’”

“Religious liberty is a God-given right, a gift granted to us by God,” he added.

“We stand together as Lutherans and Catholics today in opposing the attack on our religious liberty by the federal government,” Bishop Rhoades said.

Bishop Rhoades offered his heartfelt thanks and concluded, “I thank God for you and for your dedication. You give me hope that, with the help of God’s grace, we will see a new birth of freedom in our beloved country.”