Margaret Freiburger was born in 1926 in Kendallville. She converted from the Lutheran faith to Catholicism in 1949, and both she and her husband, Ken Freiburger, joined St. Vincent de Paul Parish, Fort Wayne, in 1970. Immediately, Margaret took on roles in music ministries, specifically the choir and playing the bass violin. She had been involved with other choirs and had played viola and bass at St. Peter Church just prior to joining St. Vincent. 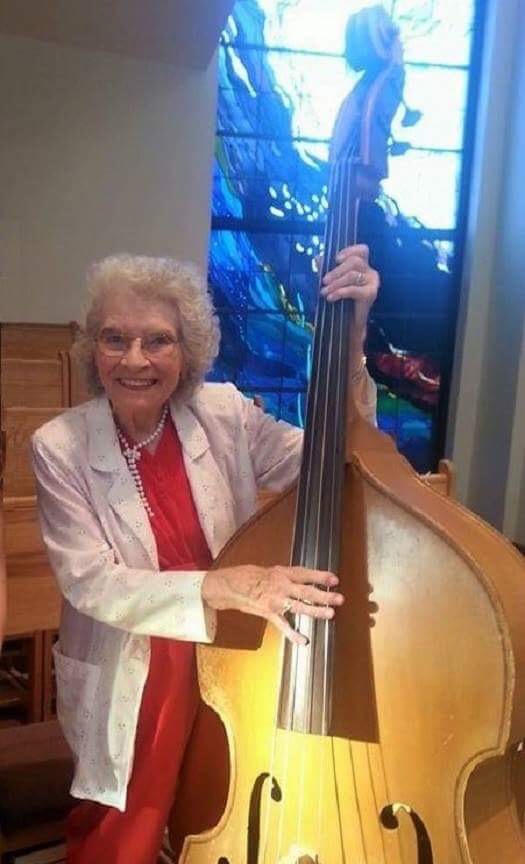 St. Vincent de Paul, Fort Wayne, parishioner Margaret Freiburger retired herself and her bass violin in September from decades of Saturday night worship instrumentation. The 91-year-old has been a musician for 72 years.
— Caroline Dewey

Margaret served as a volunteer bass player with St. Vincent de Paul for just over 47 years, retiring herself at the end of September. The St. Vincent musician’s group was her longest-running, continuous musical group out of the more than 14 area groups with which she sang and played over the years. St. Vincent was also her favorite, she said.

She started playing guitar at the age of 9, and playing the bass violin in high school. Margaret learned to dominate more than 10 different band and orchestra instruments, including the bassoon and Hawaiian guitar. The bass violin on she plays today is 72 years old, received as a gift from her father in her senior year of high school.

She wrote notes on a staff for over 15 band and orchestra instruments and for hundreds of pieces of music and has taught at least four people the bass violin. She has played in 14 different professional, semiprofessional and volunteer groups, sang on the radio and recorded a record while at St. Peter Church.

Along with raising five children, Margaret was a World War II-era stateside government worker. There is a Victory Brick in the National WWII Museum in New Orleans honoring her and her husband for their civilian government service and for their many years of assisting veterans, even beyond World War II.

While at St. Vincent, Margaret was both a choir member and a musician at the Saturday night contemporary Mass, while working full-time and playing clubs with a dance band back in the 1970s for several years.

Margaret turned 91 in September. She will always love music, she said, and will continue membership at St. Vincent. She is active with seniors at the parish, with the local American Legion, with other musicians and with a group of co-worker retirees from the government. She plans to continue playing her bass and several other instruments at performances and informal “porch jam sessions” with the Freiburger family musicians.