What comes from a priest and a deacon who love Catholicism, and love to talk almost as much as they love God? A podcast, of course.

Somewhere between the often-humorous sidebars and the friendly banter, Father Stephen Felicichia and Deacon Daniel Koehl tackle topics of interest in the Catholic world in “The Deus Vult Podcast,” a new venture the two clergymen undertook last fall. “Deus Vult” – Latin for “God wills it,” the rallying cry of the Crusades – is gaining in popularity, with more than 5,000 downloads since the first episode hit the airwaves last fall.

Deacon Koehl shared the story of how “Deus Vult” was first envisioned, on a long car ride home from seminary while both men were still in priestly formation. The two met at Mount St. Mary’s Seminary in Emmitsburg, Maryland. As the only two seminarians from Fort Wayne at the time, they quickly learned that they would have to become friends or face years of rigorous theological studies alone.

After a car crash, Felicichia found himself without the means to get home during a school break. It was only natural that he hitch a ride with his good friend. Throughout the drive, Deacon Koehl recalled, “We would just have good conversations; there was just always something to say and we never really were tired of each other’s company, which is a really good sign of friendship.” 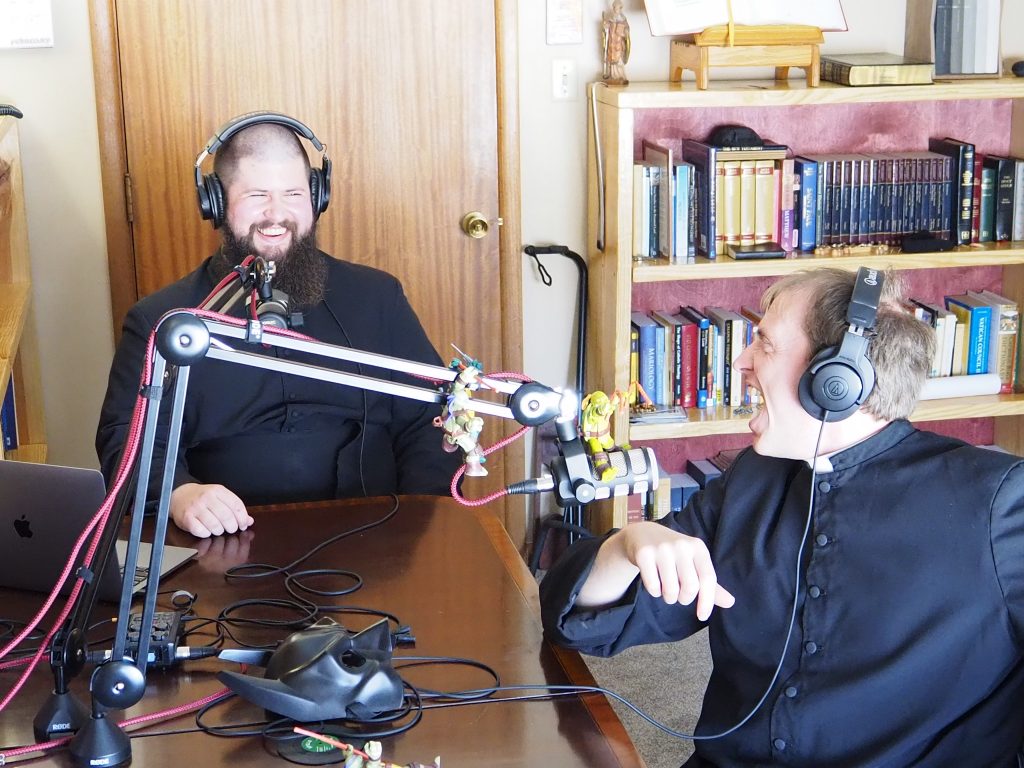 When the conversation eventually did lull – about seven hours into the eight-hour drive – Deacon Koehl put on a podcast from a group of priests in Colorado he had begun listening to the previous summer while serving at SS. Peter and Paul in Huntington. “These podcasts were my source of intellectual formation,” he said.

Sometime during the podcast Deacon Koehl remembers commenting that the two of them could do something similar. After a brief hesitation, Father Felicichia had confidently declared that they could produce an even better one.

Shortly before their ordination to the diaconate, the two appeared on Redeemer Radio in an interview that Deacon Koehl described as having a “natural flow, back and forth.” With that experience, their foray into the podcasting world was cemented. They began preparing for the new podcast, which launched last September.

Both men have used the platform to relate stories of their vocation to the priesthood, tales of family life and jaw-dropping accounts of car crashes, sprinkled throughout with plenty of amusing anecdotes and jesting.

Humor might be the catalyst to engage listeners, but the focus of “Deus Vult” is strictly Catholicism. Father Felicichia and Deacon Koehl share their knowledge and experiences of the Catholic faith while delving into a variety of subjects, from C.S. Lewis’s “Screwtape Letters” to liturgical life to finding gems of morality in areas of modern culture like music and animated television shows. 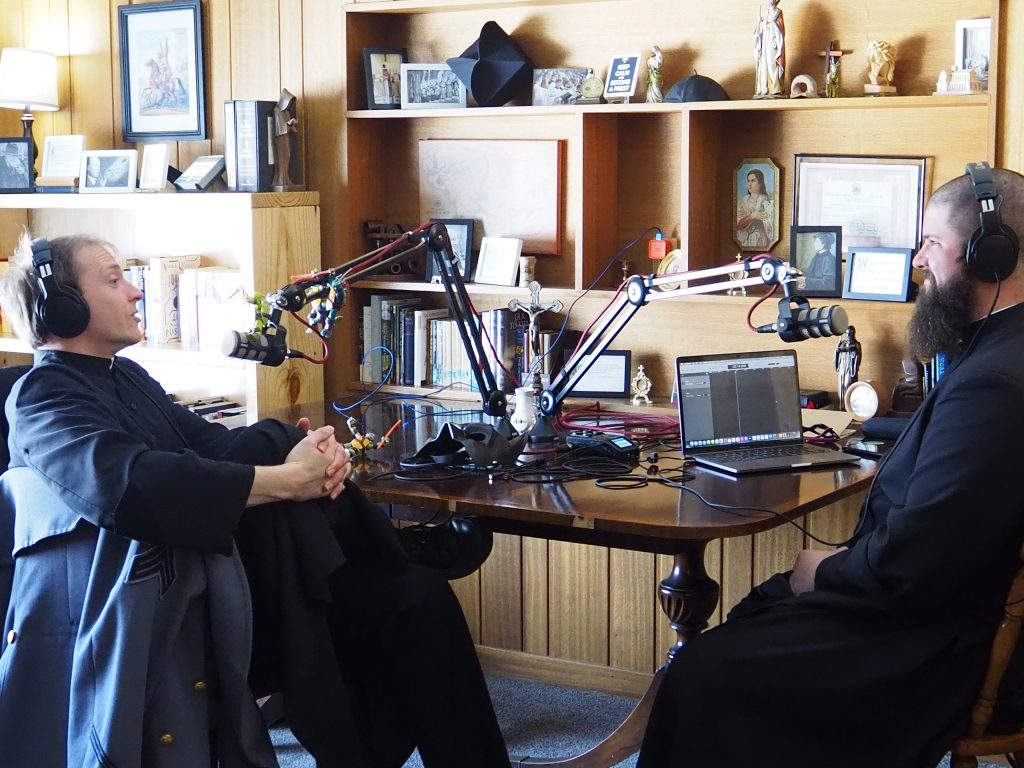 Photos by Jennifer Barton
Born out of personal discussions while in seminary, Father Stephen Felicichia and Deacon Daniel Koehl record their weekly “The Deus Vult Podcast” in what they affectionately call “the Deus Vult Cave.”

What makes the podcast popular is the relatability of the two hosts.

“I quote secular pop culture a lot. I try and speak the language of the people. This is how I grew up,” said Father Felicichia. The references often revolve around movies, music and his perennial favorite characters, the Teenage Mutant Ninja Turtles.

“It’s an inspiration, and you tie it into the saints. Ninja Turtles formed a part of my life,” he said.

“I keep this part of my childhood and try not to make it childish. I try to share it on a reasonable level with people who want to hear it.”

Deacon Koehl admitted, “The level of weird is up there. People appreciate that.”

In some ways the two have contrasting personalities which, rather than conflict with each other, blend to create a cohesive production. Father Felicichia has a strongly outgoing and loquacious personality; Deacon Koehl is a self-professed introvert with a more reflective demeanor during discussions. Their dialogue flows naturally from a genuine friendship and is never scripted. And though their verbal paths may meander, the conversations always circle back to the topic at hand.

“I think for people to be able to have a sense in their minds that their clerics are also friends and have normal conversations is helpful,” said Deacon Koehl. “We’re showing our friendship and portraying topics in a way that’s hopefully approachable.”

Some of the subjects addressed they do not necessarily consider homily-worthy, such as their podcast on vesting prayers. And some are better unwrapped in the context of a discussion.

“In the place of a conversation, it allows for a much deeper level of exploration, whereas if one just keeps talking just would seem to monologue forever,” Father Felicichia explained. “Conversation is a place you witness — please, God — the human spirit and its great joy. And it’s fun, too. I come here honestly and I just decompress, talking about life and stuff that’s interesting.”

Subject matter is chosen on alternating weeks by Father Felicichia and Deacon Koehl based on their personal interests and areas of expertise. Deacon Koehl does keep an ever-growing list of ideas that they would like to cover in future episodes, including “Lord of the Rings,” mythology and well-known modern Catholic figures, among others. The duo also intends to bring in guests for future discussions.

In case these matters seem too lightweight for a Catholic podcast, Deacon Koehl plans to dig deeper into theology once he is ordained to the priesthood in the spring. “There are other things I want to do some podcasts about, things that are more cultural/moral problems like gender theology. We’ll get into the weeds with some things that are a little heavier.”

The hope for “Deus Vult” is to help Catholics learn more about their faith and see Catholicism as interesting, rather than boring. “There’s a side of it that somebody else looks at the same thing you’re seeing and sees it from a different angle … and that allows all these different avenues to open up and discuss,” Father Felicichia stated.

Deacon Koehl elaborated, “There are plenty of podcasts out there that are giving you the same sort of thing – they’re just going through the catechism … which is fine, but that’s not what our podcast is about. We might touch on those topics as foundational things, but we’re getting into some of the stuff that people have forgotten about and that’s the reason we exist.”

Deacon Koehl handles all the recording aspects, though he said starting a podcast is not difficult. Episodes are hosted on Buzzsprout and are available through podcast streaming services such as Spotify, Apple Podcasts, and others. Additionally, it has recently been picked up by Redeemer Radio as part of their podcast blocks, typically airing on Thursday mornings.

With plenty of Catholic material yet to unpack, Father Felicichia and Deacon Koehl hope to continue reaching listeners through “Deus Vult” and bringing Catholicism into the mainstream.

“We’re just talking. We’re not looking to advance any kind of agenda, other than that Catholicism is pretty cool and you might learn something maybe,” Father Felicichia asserted.