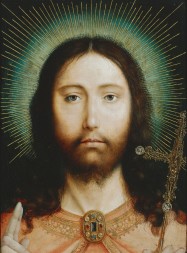 “A faith centered on Christ and on the power of His grace inspired the mission of the first Christians,” says the encyclical “Lumen Fidei” (“The Light of Faith”) from Pope Francis. Pictured is the painting “Christ Salvator Mundi” by Quentin Metsys.

Relativism claims there is no objective truth. Proclaiming and living the truth of the Gospel can be more challenging today than it was 30 or 40 years ago due to strong currents of relativism in our culture today. Even the objective and universal truth about the nature and meaning of marriage is doubted or rejected by many today. Many truths of the Gospel and of natural law are dismissed as mere “opinions.”

In this cultural context, committed Christians are often criticized as being narrow-minded, intolerant, or even bigoted for standing up for the rights of the unborn or for the dignity of marriage. To speak of the inalienable right to life of every human being or the essential male-female complementarity for a true marriage opens one to criticism or even ostracism in some places.

Lest one thinks that committed Christians are only criticized on issues of human life, sexuality, and marriage, attacks and accusations also arise when one affirms fundamental principles of Catholic social teaching (e.g. the universal destination of goods). We’ve seen this, for example, when Pope Francis has spoken of the “idolatry of money” and against economic injustices in the world.

Where does all this leave the committed Catholic individual, family, or community? We should remind ourselves of Jesus’ words: we are “in the world,” but we are not to be “of the world.” We are called to live Christ’s teaching and obey the commandments, to adhere to divine truth. The Church in this age of relativism is calling people back to the reality of objective truth. This is part of the new evangelization. This truth, of course, must be embraced not only theoretically, but in everyday life.

In today’s cultural context, some committed Christians think we need to withdraw from today’s culture, kind of like the Amish community. I have much respect and admiration for our Amish brothers and sisters, but I don’t think we should withdraw from our engagement with the world. Some say we should close many of our Catholic institutions because of government attempts to coerce us to violate our beliefs (e.g. HHS mandate). Though we must be faithful to Catholic teaching in all our institutions and apostolates, I don’t think the answer is giving up or surrendering, closing or withdrawing. Though it is difficult and sometimes quite discouraging (e.g. recent defeats in our efforts to defend marriage), we are still called to evangelize our culture.

Some fear engaging the culture because of the danger of assimilation to the values of the culture. This is indeed a danger. We see the danger especially to our children and young people who are influenced or led into error by some entertainment media or in some educational settings. That is one reason I think we need our Catholic schools today more than ever. Parents need to be especially vigilant today concerning the moral formation of their children lest they embrace the destructive relativism so prevalent in our culture.

Not everything about today’s culture is bad. Good discernment is always needed — affirming the good and opposing the bad. True discernment is carried out in the light of faith and right reason. This is necessary for good moral decision-making and for how to live “in the world,” but not “of the world.”

We can easily become discouraged given the increasing hostility of our culture to the perennial teachings and values of the Catholic faith. It is good to remember that there have been many periods of Church history worse than our situation today. There have always been persecutions and martyrs. There are many places in the world today where Christians are suffering and even dying for the faith.

I think sometimes about the difficult situation of the early Christians. They lived out their beliefs in an often very hostile culture. They loved one another and built Christian communities. They loved their enemies. And they spoke out. They spread the good news of salvation in Christ. They converted many to the Lord. They weren’t discouraged because they were such a small minority in the pagan Roman Empire with its many values and practices contrary to the Gospel. They persevered in the faith. They shared the Gospel. They lived “in the world,” but not “of the world.” They accomplished, by God’s grace, a Christian revolution as Christ’s Church was planted and grew in the Mediterranean region and beyond.

We shouldn’t let discouraging statistics, cultural trends, or political defeats get us down. How do we avoid discouragement? We must not forget the treasures we possess. We have Christ and His Gospel, the sacraments and the Church, Mary and the saints. We have hope in the One who has conquered the world by His death and resurrection. He is the Way, the Truth, and the Life. The only thing we should ever be afraid of is losing or turning away from Him. We are called to bear witness to Him today and everyday, to live the truth with love. This is how the early Christians evangelized the culture of the Roman Empire. This is how we can evangelize our culture today. We must put the Gospel into practice in our daily lives and live as true disciples of Jesus Christ!