As the pro-life movement in America continues to gain momentum following the overturning of Roe vs. Wade, the next generation of leaders in the battle for life is preparing to take charge.

Right to Life of Northeast Indiana held its 17th annual Life Defenders Training on July 15-16 at the University of Saint Francis in Fort Wayne. The overnight event is designed to equip high school and college students with the ability to have meaningful and effective conversations about the value of life. According to Abigail Lorenzen, Education Coordinator at Right to Life of Northeast Indiana, this age group plays a critical role in making the case for life. 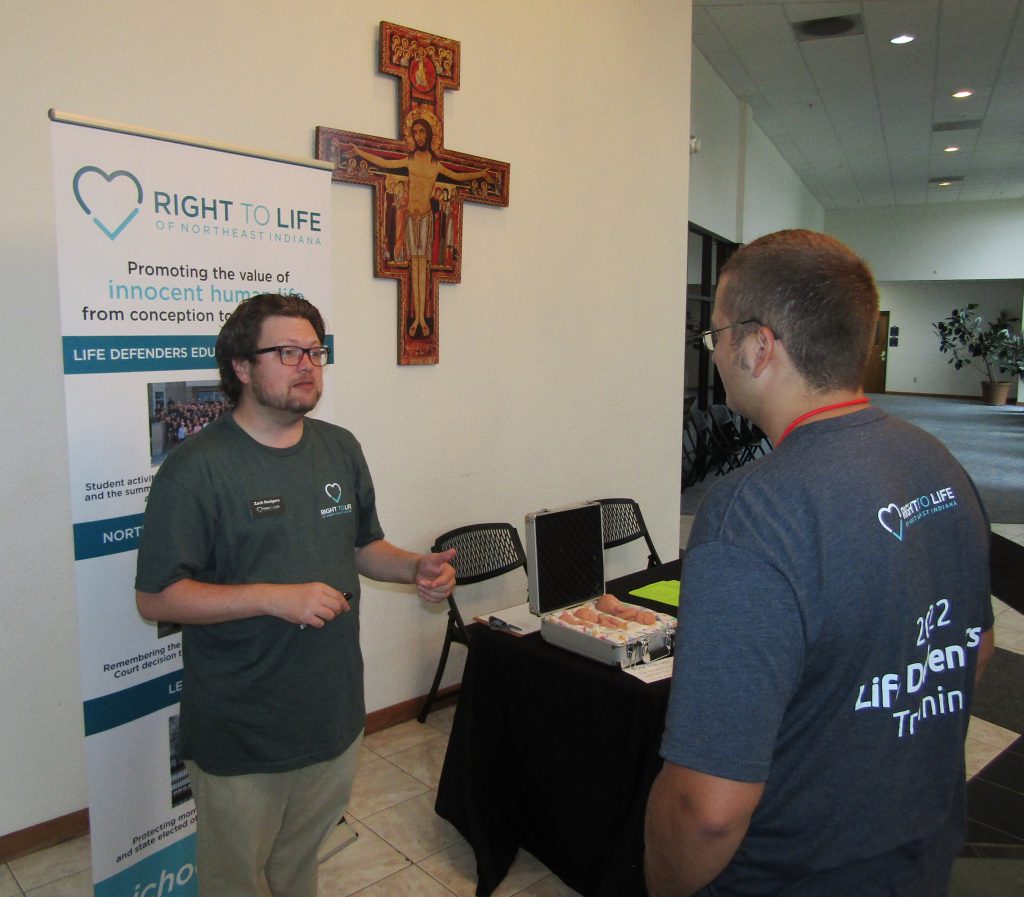 Photos by Eric Peat
Right to Life of Northeast Indiana Executive Director Zach Rodgers speaks with a volunteer at Life Defenders Training at the University of Saint Francis.

“Most high school and college students actually serve as the frontline for people who are in crisis pregnancies,” said Lorenzen. “When a high schooler or college student gets pregnant, who’s the first person they ask for advice? Who do they tell? It’s their best friends. So, if we can equip them to have good responses, and to be ready in that kind of situation, it can do a lot of good – because that first reaction makes all the difference.”

The event began with dinner and an opening talk from Jannique Stewart of Life Training Institute. Her message focused on the dangers of critical race theory, its divisive effect on our country, and its role in advancing the abortion agenda. 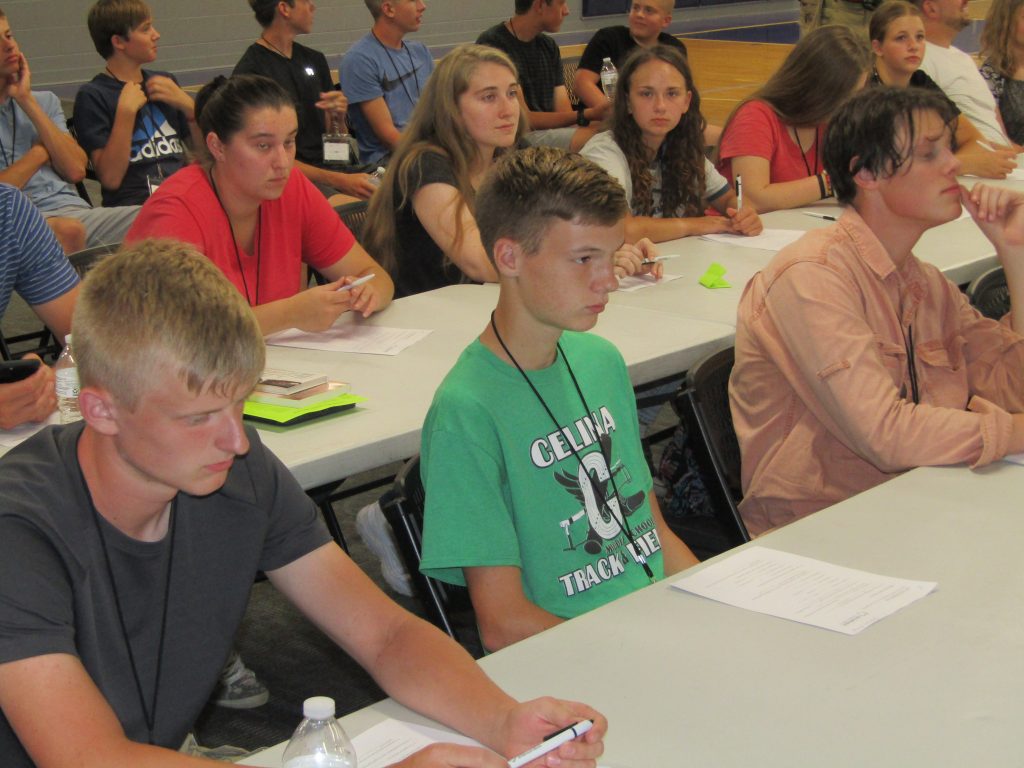 This fundamental truth, Stewart said, is rooted in the words of Dr. Martin Luther King, Jr. and in the first book of Genesis – that all bear the image of God equally. While we must acknowledge that concepts such as slavery and segregation are part of our past, this does not mean we should assume that racism is always present.

The rest of the event consisted of a series of training sessions, which were led by educators Mike Spencer, Seth Drayer, and Ian Spencer. These sessions covered topics such as how to define the preborn through the science of embryology, how the notion of human value is measured, and how to navigate conversations about life in a way that will reach hearts. After lunch on Saturday, students were also able to participate in breakout sessions of their choosing. Among the issues addressed were the physical effects of abortion on women, the contrasting biblical and pro-choice worldviews at play in society, standing up against cancel culture, and sexual integrity among young men and women. 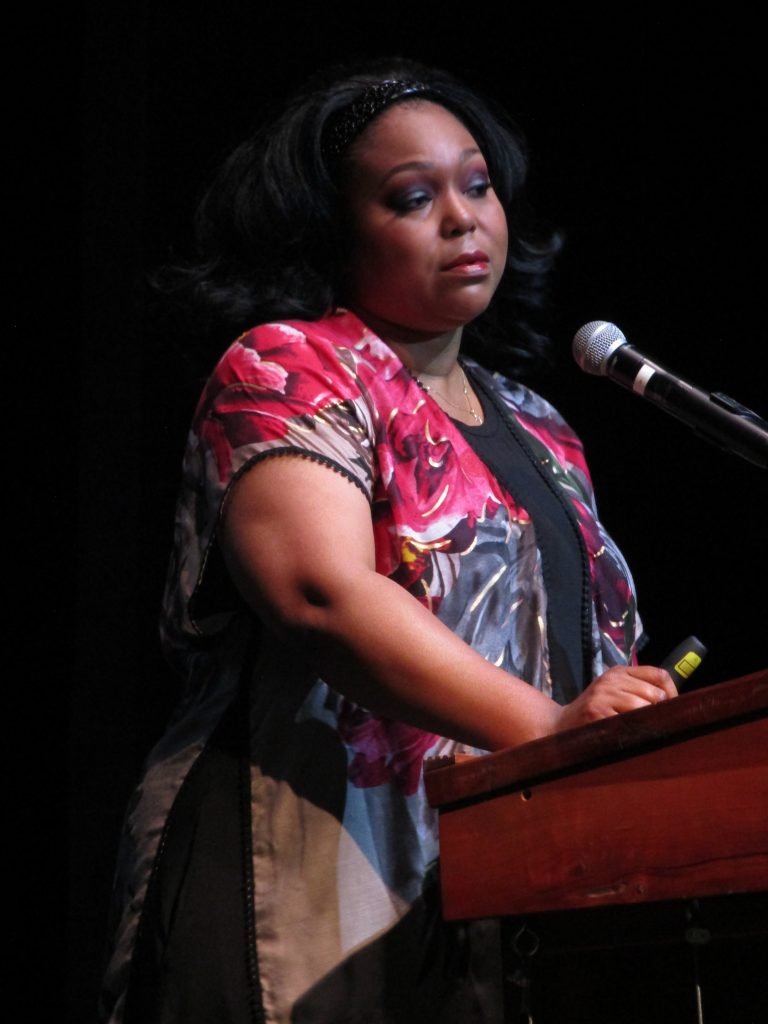 Becoming armed with this vital knowledge is what drew many students to the event, from the Diocese of Fort Wayne-South Bend and beyond.

“I think that this issue, specifically nowadays, is just super-important in society,” said Shelby Schlicker, a student at Mississippi State and a first-time attendee of Life Defenders Training. “I would love to be able to go back to school and be able to have conversations with people about this topic that are well-informed.”

Isaiah Rusher, a student at Purdue and another first-time attendee, said he already receives questions about his pro-life stance and is looking forward to defending it.

“I have a lot of friends who are not religious at all, more of pro-choice,” said Rusher. “They ask me a lot of good questions that I don’t all the time have the answer to. So, by coming here, I hope to be able to give them the answers to all the questions they have for me.”

One key takeaway for Ethan Bailey, an intern at Right to Life who experienced the event for the first time, was giving credence to the reality of how life experiences can shape worldviews.

“Everybody has their own perspective, and that obviously changes male to female or based on where you live – just the different characteristics of your life,” said Bailey. “So, I think the biggest thing that you can do as a pro-life person coming to an event like this is to keep an open mind and be able to have a conversation, understand the other person and where they’re coming from, and why they have the beliefs they do.”

By the end of the event, students had not only received essential training – they had received a taste of a college environment. Lorenzen cited this as a major advantage of hosting the event at the University of Saint Francis as opposed to their prior sites of Camp Lutherhaven and Concordia Seminary. The opportunity to stay overnight in dorms and eat meals in dining halls provided some students with their first exposure to a college campus. As Lorenzen said, it also gave them a chance to meet and befriend like-minded classmates. 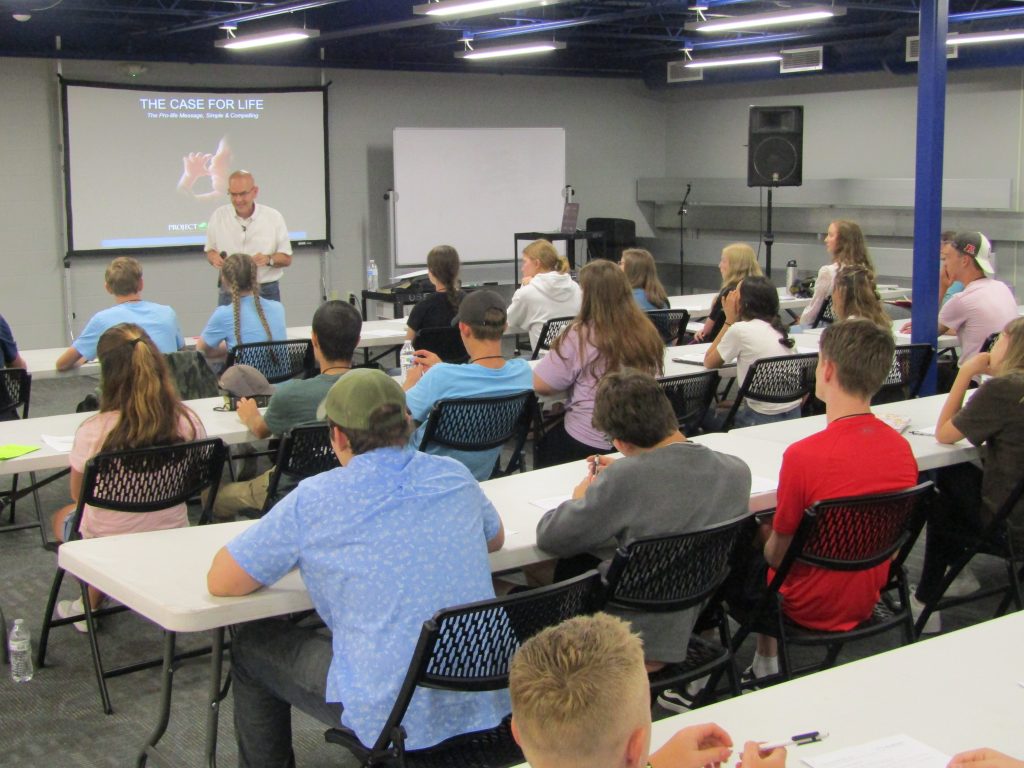 Eric Peat
Mike Spencer leads students in a training session on Making the Case for Life at Life Defenders Training at the University of Saint Francis.

“A lot of our pro-life students feel isolated, and so to bring them all together in a camp every year is such a powerful thing for them,” said Lorenzen. “It’s so cool to see them make these friendships. It really has this tight community feel to it, and we just love every year adding more students to that tightknit group.”

This extended family already includes prior attendees who met their future spouse at Life Defenders Training, while others who attended as teens are now returning as adult chaperones. As Right to Life intern Kallie Schultz observed, it’s a group that will only continue to grow.

“We’ve had a lot of people come up to us tonight and say, ‘How can I get involved? What can I do?’” said Schultz. “People want to make a difference. If there is something that they’re passionate about, they want to get involved further. And coming to an event like this makes you ask those hard questions first so that you’re able to broaden your knowledge, which eventually helps you be able to step into internships or volunteer in ways that actually make a difference.”