As we begin the 40 days of Lent, I invite you to meditate on Jesus’ parable of the publican and the Pharisee, contained in the Gospel of Luke (chapter 18, verses 9-14). It teaches us the true spirit of prayer and the humility, repentance and interior conversion that are at the heart of the observance of Lent. We can make all kinds of resolutions for Lent, but if we lack the humility and honesty of the publican, our Lenten prayers and works will be fruitless. 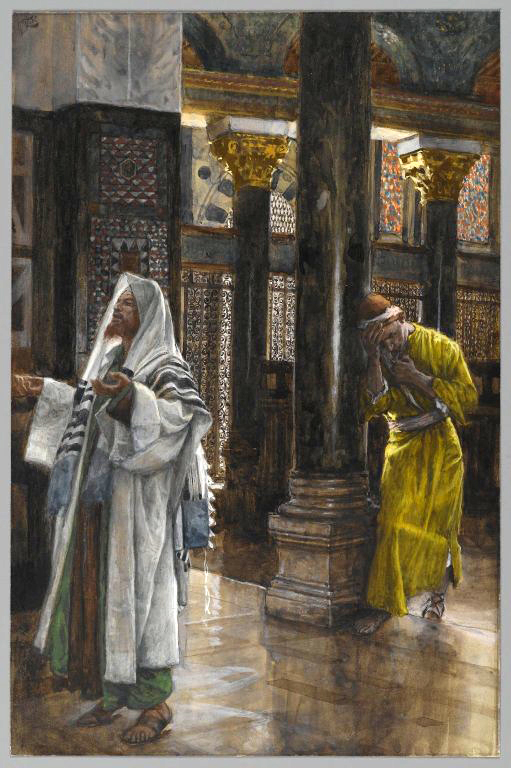 The parable of the publican and the Pharisee
He also told this parable to some who trusted in themselves that they were righteous and despised others:
“Two men went up into the temple to pray, one a Pharisee and the other a tax collector. The Pharisee stood and prayed thus with himself, `God, I thank you that I am not like other men, extortioners, unjust, adulterers, or even like this tax collector. I fast twice a week, I give tithes of all that I get.’
But the tax collector, standing far off, would not even lift up his eyes to heaven, but beat his breast, saying, `God, be merciful to me a sinner!’
I tell you, this man went down to his house justified rather than the other; for every one who exalts himself will be humbled, but he who humbles himself will be exalted.” — Luke 18:9-14

What was the problem with the prayer of the Pharisee? After all, he did good things. He fasted and tithed. That took real effort. He observed many precepts of the Lord. But all that was exterior. Where was his heart? It was proud, even arrogant. When he prayed, he didn’t thank God; he praised himself. And he had this sense of superiority over “other men,” whom he describes as “extortioners, unjust, adulterers,” or even, for example, referring to the other one there in the temple, “like this tax collector.”  He had contempt for others. The Pharisee held himself to be just, but in fact he wasn’t: He neglected the most important commandment: love of God and neighbor.

When the Pharisee spoke to God, he was really praying to himself. He stood in the temple with head unbowed; he didn’t feel the need to prostrate himself before the majesty of God. He felt secure and proud, like he was the master of the temple. He prayed with arrogance and hypocrisy so his prayer wasn’t fruitful. In fact, it wasn’t authentic prayer. His heart had lost its way.

Reflecting on the Pharisee, Pope Francis said something that’s good for us to reflect on regarding our own prayer and the upcoming season of Lent: “in life, whoever believes himself to be just and criticizes others and despises them is corrupt and a hypocrite. Pride compromises every good deed, empties prayer, and creates distance from God and from others.” The Holy Father says that the prayer of the proud does not reach God’s heart, but the humility of the poor opens it wide.”

Let’s now consider the prayer of the humble publican or tax collector. The publican was no saint. In fact, he was pretty bad. He was collecting taxes for a foreign empire and became rich by cheating people. He stole from his own people. That’s why the Jewish people considered publicans to be traitors, unclean and sinful. They really did terrible things. So imagine the people who heard this parable of Jesus in which the good guy was the publican and the Pharisee was the bad guy.

What makes the publican the good guy and a model of prayer for us? He wasn’t egotistical like the Pharisee. His great virtue, maybe his only virtue, was humility. He prayed with a humble and contrite heart, a heart that the psalmist says, “God will not spurn.” The publican had a lot to be humble about. He committed serious sins. But he was sorry and repentant. With true humility, he prostrated himself before God and prayed from his heart not a lot of words like the Pharisee, but a few words full of depth and truth: “God, be merciful to me, a sinner.” God heard and approved this prayer of the publican because it came from a humble and contrite heart. The publican was probably the very kind of person the Pharisee believed him to be: greedy and dishonest, and maybe he had other vices. But the publican admitted his guilt and begged God for mercy.

St. Thomas Aquinas taught that “the sinner is justified by God moving him to righteousness.” This happens when a person is humble and opens his or her heart to this grace. St. Basil the Great gives us this advice, in the light of this parable: “Never place yourself above anyone, not even great sinners. Humility often saves a sinner who has committed many terrible transgressions.” Now God is the God of all, including of the Pharisee, but He is the Savior of the humble and contrite. The publican left the temple justified; the Pharisee did not.

During Lent, let us think about our lives, including our prayer life, in light of the Parable of the publican and the Pharisee. If we see some of the Pharisee in ourselves, let us ask God to help us to get rid of it, to conquer our pride. Fundamentally, it means recognizing in truth that we need God and we need His mercy because we are sinners. It is good to pray often in the words of the publican: “God, be merciful to me, a sinner!”

May the humble Blessed Virgin Mary, Our Mother of Mercy, help us to pray always with humble hearts and to be sincere in our repentance during this holy season of Lent!