A shepherd walks among his flock, leading and guiding it through fair or stormy weather. He feeds them physically and spiritually. He spends his life amidst the flock.

Following Christ’s example as the Good Shepherd is at the heart of pastoral ministry, the very name of which stems from this loving care. In a teenager’s sometimes-confusing world, high school pastoral ministry seeks to play a loving, guiding role.

As Catholic schools in the Diocese of Fort Wayne-South Bend continue to embrace a strong Catholic identity, pastoral care has become a priority.

Mark Kirzeder, principal of Marian High School, Mishawaka, stressed recently the importance of such care. He noted that Bishop Kevin C. Rhoades changed the ministry’s name from “campus ministry” to “pastoral ministry” several years ago in an effort to demonstrate the pastoral role those who engage in it are to take in the faith lives of students.

Kirzeder said he believes that as principal, the role given to him by the bishop includes an element of lay pastoral ministry — serving as a spiritual role model for the students entrusted to him. He also recognizes, he said, that he cannot fulfill that mission on his own. “The time needed to spend with each student could not be done by myself and the dean of student formation alone,” he admitted. That’s where lay pastoral ministry comes in.

Students at all four high schools have access to their school’s lay pastoral ministers at any time. Walking with students in their faith journey, providing guidance and help in their everyday lives is of greatest importance for those ministers. “Our team is central to meeting students where they are and helping them further develop and deepen their love of God and Catholicism,” said John Kennedy, principal of Saint Joseph High School, South Bend. “When students can allow the teachings of Jesus to influence decisions, how they treat each other … we become a more kind and welcoming school.”

The pastoral ministry office is situated next to the chapel at the schools, because caring for the spiritual lives of students is at the heart of Catholic education. The prominent location is a symbol for students, staff and visitors of the role their faith should play in their lives.

“We want to help everyone to encounter the Gospel when they come through the doors,” stated Kirzeder.

This year, three of the four high schools — Marian and Saint Joseph, and Bishop Luers High School in Fort Wayne — brought on new lay staff members in pastoral ministry. It also marks the first time since the early 1990s that each high school has two chaplains assigned to it, something Kirzeder said is a blessing. “It puts two priests in the building; that makes it easier to schedule things like adoration.”

He also shared that the chaplains are very active in Marian student life. Father Nathan Maskal, for example, often spends lunchtime with the students.

Kennedy pointed out that having two chaplains gives students two different personalities to relate to. Students tend to gravitate toward the young, vibrant chaplains whom, they feel, seem to understand them.

Lay pastoral ministers carry with them knowledge and experience in faith formation and ministry. Angie Hall brought her experience in retreat planning and catechesis to Marian, including familiarity with the liturgical calendar how it affects scheduling around it. “She is vital in all aspects of our school,” said Kirzeder. 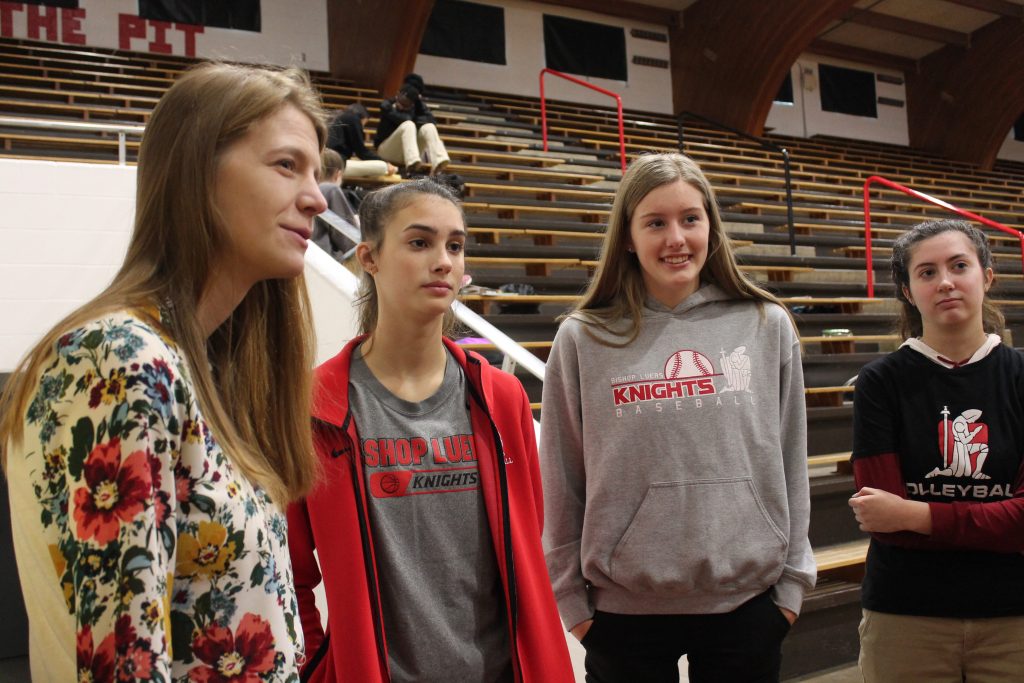 Jennifer Barton
Nicole Rudolph, new pastoral minister at Bishop Luers High School, spends time Nov. 22 getting to know a group of female students in the gym. The mission of lay pastoral ministry in Catholic high schools of the diocese is to provide encouragement and opportunities for staff and students to grow in their faith.

Nicole Rudolph felt called to minister to young people: She found a home at Bishop Luers, and said her experience living in different places throughout the southern Midwest has given her a great appreciation for the strong Catholic identity fostered within the Diocese of Fort Wayne-South Bend. Principal James Huth extolled the good work Rudolph does connecting with individual students, finding those who need to be presented with the challenge of growing in their faith and providing that guidance.

At Saint Joseph, director of pastoral ministry Tami Goy has been joined by alumna Rylee Kenney, whose previous experience included directing summer programs for high school students at The Catholic University of America.

Bishop Dwenger has not seen a change in lay pastoral ministry. Jason Garrett heads the department, and principal Jason Schiffli said he believes that with Garrett’s dual role as coach and minister he has set an especial example for the young men at Dwenger. Garrett has helped them to grow their identity as Catholic men and shown them that they can be both masculine and strong in their faith.

Schiffli sees himself, other teachers and students who regularly seek the accompaniment of pastoral ministers as “active witnesses of the faith.” Huth, too, sees the importance of pastoral ministry to staff as well as the students. “Pastoral ministry meets the needs of adults, too. Adults lead the way; we can go into the chapel to restore the strength of our faith in God.”