They might have once been commonplace, but modern society often treats large families as an anomaly. American culture is geared toward two-income parents, so neither stays at home with the children, and the average household boasts only two or three offspring. Large, devout Catholic families tend to be seen as a countercultural phenomenon and are sometimes the target of mockery in Hollywood and in society.

The tide may be starting to turn back toward bigger families among the younger generation. Some local mothers demonstrate that it is possible to raise large families in a culture that ridicules them. 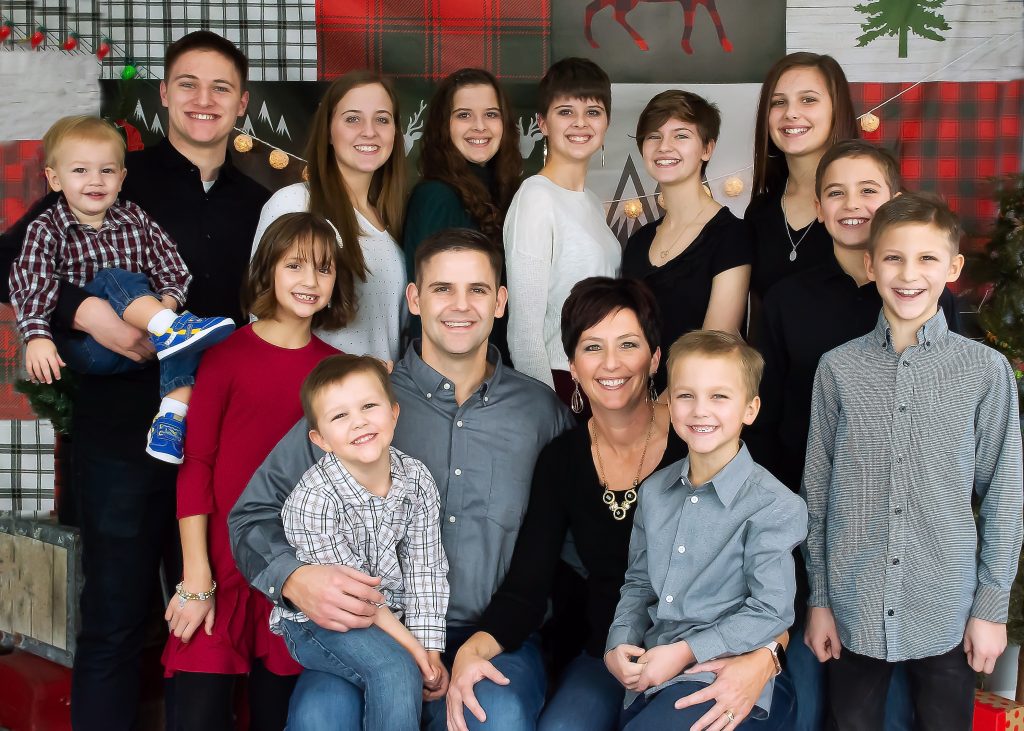 Provided by the Jessica Smith
The Scott and Jessica Smith family of Columbia City let the size of their family be in God’s hands. The couple has 12 children, including a set of triplets.

In raising her family of 12 children, Jessica Smith has heard every flippant, derogatory comment about them. People have asked about her finances, given her the “you-know-how-that-happens” remark, and even gone so far as to tell her they hoped she would have a miscarriage. Friends and family members have argued against her homeschooling her children from kindergarten through high school. She has walked into restaurants and heard other customers ask to be moved away from her large family.

None of those things have deterred Smith, a longtime parishioner of St. Paul of the Cross in Columbia City, from loving the “big, counter-cultural life that we live.” Her oldest son is 20; her youngest is 2.

Neither her nor her husband, Scott, come from large families, and they hadn’t planned on 12 children. She recalls telling people that “if God desires me to have 12 children, then I will;” but she expected that number was too high to ever become a reality. “And now here we are.”

It started with one child, and then suddenly the Smith family tripled. They had no idea Jessica was carrying three babies prior to the ultrasound for their now-19-year-old triplets. But they had prayed for God’s will to be done, telling Him they thought they could handle one more baby. When the ultrasound technician announced that it was twins – and then a slight movement revealed three heads instead of two — it was a dramatic moment.

“It was literally the best thing that ever happened to us,” Jessica remarked. “From then on, we just kind of let it be in His hands. We submitted to His will.”

Raising a large family is not without financial and emotional cost. Jessica admitted that each time they were faced with the possibility of another child being added to their brood, she and Scott went through a checklist of “why nots” to determine if they were truly trusting God to provide for them.

“I think openness to life is something that as Catholics, we’re so quick to dismiss,” she stated. “People look at Scott and I and think that we chose this, that this is what we always dreamed of and that it’s not hard at all. But this is a life of great sacrifice.”

She continued, “It has involved emotional struggle, financial struggle; the fruits are so much bigger than that, though, which is true of anything God gives us.”

Trusting God’s providence sometimes requires giving up material possessions, which is the comment Jessica most dislikes hearing. She grew up wearing handmade and garage-sale clothes and was never bothered by that, and she applied this frugal mindset to her own children. Sometimes she has to tell her children ‘No.’ “But that’s ok, they learn to not take things for granted. They learn to pitch in and pay for some of their own stuff. They learn to be generous to others.”

The family is heavily involved in Taekwondo, which is an avenue of evangelization for them. “People recognize that there’s a joy in our family and the source of that joy is our faith,” Jessica said. “And we pray before every tournament … but we always pray that the most important thing we do at that event is be a source of Christ’s love, that somebody will see that in us and be drawn to it.”

Jessica spent many years in ministry at St. Paul before taking a hiatus. She is now back serving as co-leader of the Gifted and Sent Ministries with Father Andrew Curry.

Her love of service has rubbed off on her daughter, who also feels called to take part in the ministry.

During times of trial, Fort Wayne mother of seven Gina Huston has turned to the Holy Family to intercede for hers, with wondrous outcomes. Her children range from 20 years to 18 months.

After she and her husband, Chris, married, they had three children quickly, then took a six-year hiatus due to health issues. They used natural family planning to space their children, and Gina made some dietary changes to improve her health so they could have more children. She was already pregnant with her sixth child when they discovered something was wrong with their then-infant son, Calvin.

One night, Gina woke with a bad feeling and discovered Calvin suffering a stroke, which left his physical capabilities severely diminished. By age 5, he had been diagnosed with a rare genetic disorder called CACNA1A. He requires the use of a wheelchair and feeding tube.

As he grew, caring for him became difficult, particularly carrying him, and they lived in a two-story house. Calvin loves water, so Gina often took all the children to a community pool, but that put stress on her because she had to stay in the water with Calvin while trying to watch her other children. Once when the pool had to be evacuated due to a thunderstorm, Calvin experienced a meltdown so severe that Gina had to call her husband home from work.

The night before Chris was about to sign a costly loan to put in a pool, Gina was a mess. She remembers praying to Mary. “I told the Blessed Mother ‘I don’t know why this happened to me, but all I want is this kid to be happy. I’m supposed to care for these kids … this is too much.’” She cried herself to sleep that night.

The next morning, they pulled the plug on the loan but still needed a housing solution. That same day, her sister sent her a link to a YouTube video describing how Mary would not refuse the request of anyone who prayed four rosaries a day. Even though finding time to pray the rosary “is so insane at my house,” Gina took out a piece of paper, wrote down every little requirement she could think of for a new house and began playing YouTube rosaries throughout her day.

Their elderly neighbors had a beautiful, one-story house complete with basement and pool, but insisted they would never move. Twenty-seven days after Gina started the four rosaries, the older couple came to the Hustons’ door asking if they wanted to buy their house because they were moving out of state.

Everything about the house met the Hustons’ needs, right down to wood flooring that was perfect for a wheelchair. Gina and Chris were even able to sell their home to another Catholic family with children who play with theirs. 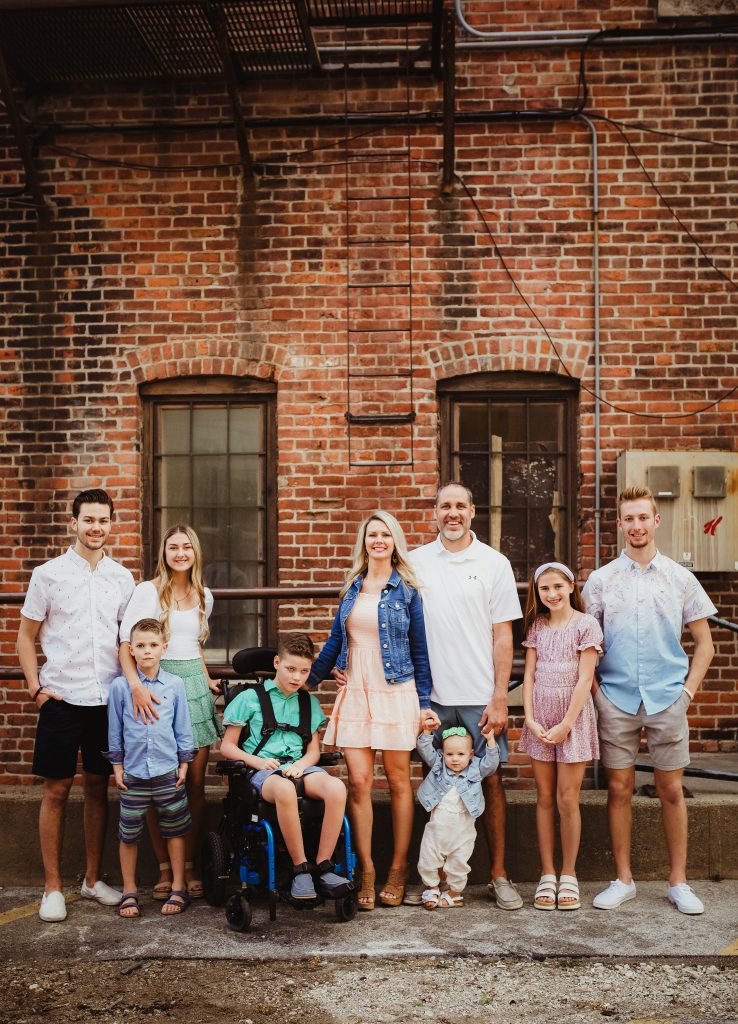 Provided by the Gina Huston
Gina and Chris Huston have found abundant joy and blessings amid the struggle of having seven children.

Instead of being abandoned by God, Gina found that Mary “listened to me even though I was being a brat.” The four rosaries “changed my life.”

Anxiety over the possibility of another child plagued her, yet they wanted one more. Prayers to Blessed Solanus Casey were answered when Gina attended a Cursillo weekend and found herself surrounded by parents of large families, who reassured her that she could handle another child. She and Chris now have an 18-month-old daughter.

The St. Charles Borromeo Parish community pulled Gina through that tough time by providing meals even amidst the pandemic. “I don’t think I cooked the entire summer. … I couldn’t have done it without them,” she said.

The struggles of rearing seven children are nearly twofold with a special needs child, but there is abundant joy and blessings as well. Gina’s and Chris’s children have learned to be loving and compassionate people. Their oldest son is studying to become a nurse and is Calvin’s full-time caregiver, paid by the state. During quarantine, the older kids held their baby sister while doing online lessons.

For the other children, Calvin’s life normalizes disabilities and demonstrates the value of every life. “I think it’s teaching my kids to be the people God designed them to be.”

Gina relies on Mary to walk with her in motherhood, interceding for her children daily.

“I just say those rosaries, which I’m not even halfway there when I’m saying them, but I’m trying my best, I feel like she’s helping us along, because it is a lot.”

Gina and Chris try to do things with each child individually and approach discipline on an individual basis. When it comes to passing on the faith, Gina said, “I’ve learned big time to let the dad lead,” she commented. “He takes them to holy hour, which we try to do once a week … because if the husband doesn’t go to church, it’s like 90% that the kids won’t,” she said.

Advice for a countercultural life

How do large families flourish in a sometimes child-unfriendly culture? Amanda Woodiel of St. John the Evangelist Parish in Goshen said her family makes deliberate efforts to live counterculturally. Both she and her husband are converts and are raising their five children in the Catholic faith. She said, “We try to order our lives into something larger.” They follow the Church calendar and fast and feast on Fridays and Sundays respectively.

The Woodiel family has one television in their house and their children have a set screen time and can earn TV-watching privileges. No smart phones – “we live in the time and place of reality,” Woodiel stated. 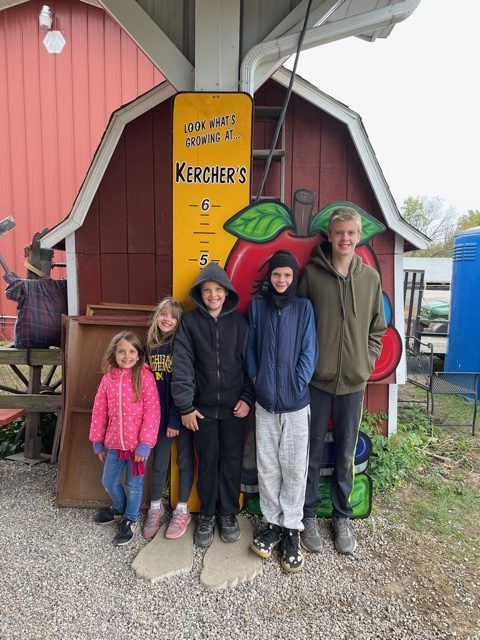 She is trying to disconnect the family’s wants from their spending, partly by avoiding instant gratification services like Amazon Prime. “My kids are very used to a make-do mentality.” They sacrifice material goods and try to teach their children life skills, including woodworking and baking. First Communion celebrations do not consist of elaborate parties, but rather pilgrimages to places such as the Basilica of the Sacred Heart on Notre Dame’s campus. And Christmas often looks a little different as well. “My kids get three gifts at Christmas,” noted Woodiel.

The Smith family views Christmas in a similar manner. They celebrate Advent by making gifts for others. “We spend a lot of time thinking and praying and creating for the people that we love, and my kids are so much more focused on watching other people receive than they are with what they receive because they’ve created something for someone else.”

Jessica summed up the reasons for having multiple children. She said, “It’s not just about numbers, it’s about what we teach our children to put into the world. How many people will see and know Christ because of my 12 children? Hopefully more than we can count.”