Daniel Koehl is prayerfully anticipating his ordination to the Sacred Order of the Diaconate May 18 at the Cathedral of the Immaculate Conception in Fort Wayne. 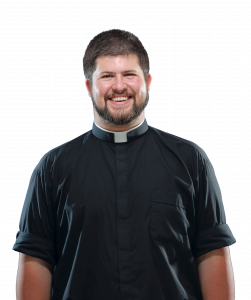 He was raised Catholic in his home parish of St. Vincent de Paul, Fort Wayne. After eight years attending the parish grade school, he attended Bishop Dwenger High School. Upon graduation in 2011, he began to study engineering at Purdue University, West Lafayette, but after two years discerned God’s call to enter the seminary.

After being accepted as a seminarian for the Diocese of Fort Wayne-South Bend, he transferred to Pontifical College Josephinum in Columbus, Ohio. He completed his theological studies at Mount St. Mary’s Seminary, Emmitsburg, Maryland.

His family had an impact on his decision to enter the seminary, he said. “I have a very supportive family. They have always been there for me and have been behind me through these many years of seminary formation. I can’t thank them enough.”

Koehl’s mother and father both are practicing Catholics, which he said played a critical role in his upbringing.

“One of the really beautiful aspects of this upbringing is that the Catholicism in our family was just a given. It was never any question of whether or not we were going to go to Mass on Sunday, or if we were going to pray before meals and bedtime. I was never asked if I would like to go to the public school instead. My parents knew what was best for me and taught me to live accordingly.

“The faith was seemingly always the backdrop on my life,” he continued. “My younger brothers have always shown me the greatest support. Both are young adults now and our friendship only continues to grow. It is especially edifying when they, though younger than me, teach me something about being a faithful Christian man. This seems to happen more and more. I am certainly proud of the men they are becoming, and I have received so much affirmation and support from them over these years I’ve been in seminary. They make it pretty easy to be a big brother.”

He says he also owes many thanks to extended family members who have frequently encouraged him in his journey and “share my joy as I approach holy orders.”

Koehl also is grateful for the leaders of his parish youth group, because they taught him that Jesus was alive and a person who wanted a relationship with him.

“As many vocation stories go, there were perhaps many small signs, or at least influences, which led to a greater level of discernment in the seminary. For example, when I was in middle school, I learned to serve at Mass. On Sundays, I would very frequently stop at the sacristy to ask the priest if he needed any more servers. As a result, I began to serve Mass so frequently that many friends and family began to call me ‘Father Danny.’ At the time, I just laughed at them, but today I realize the importance that serving Mass, being in the sanctuary with the priest, really had on me. It taught me the beauty of holiness and gave me a special insight into what it meant to be a priest.

“As I grew up, I was particularly blessed with numerous excellent priestly examples. Each taught me different aspects of being a priest through my interaction with them, for which I am thoroughly grateful.

“There was one priest who was perhaps only a spark to my discernment, but it only takes a spark to start a fire. The late Bishop John M. D’Arcy was the first person I ever heard say the word ‘vocation.’ He set forth in my very young mind the idea that God is calling me to holiness in a certain way of life. I hope that that initial message will bear great fruit in my life as a deacon and priest, may he rest in peace.

Another priestly example was while in high school while on a retreat. Like most retreats, there was time set aside for the sacrament of reconciliation.

Koehl remembered making a very good examination of conscience, to the extent of picking through his life and finding all the sins and habits that put up barriers between the Lord and him. He recalled that when the priest was saying the words of absolution, he had a very clear sense of the presence of Christ in the priest. Koehl reflected that, “In that moment, it was as if Christ was offering me the seat on the other side of the confessional, to be an instrument of mercy for others as His priest. A great peace washed over me and, from that point on, I always sort of knew that I would be a priest, even if I made it there by an indirect route.”