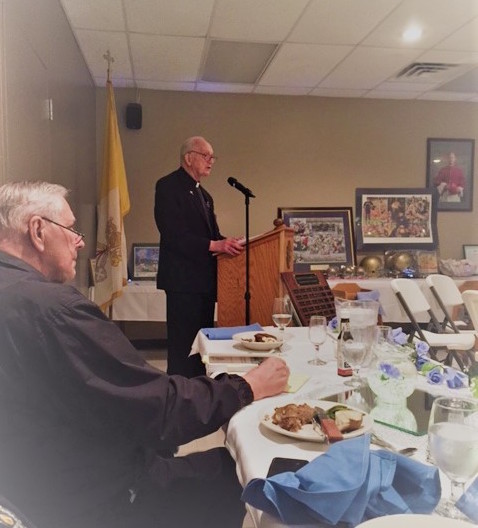 A theologian’s commentary on Our Lady of Lourdes, and participants’ donations of about $1,500 for a pilgrimage to the site of her apparition, spread inspiration at a Knights of Columbus Lourdes Ball on May 20.

Knights of Columbus Santa Maria Council 553 in South Bend hosted the event for the 52nd year. Members and families came from various area parishes, helping to raise funds for travel to Lourdes, France — support traditionally offered to a selected individual who seeks healing in the place where the Blessed Mother appeared in 1858. The annual ball once again combined dinner and dancing with a silent auction and a guest speaker focused on Mary and the graces attributed to her intercession.

This year’s speaker, Father Edward O’Connor, CSC, emeritus professor of theology at the University of Notre Dame, retold details from the life of Bernadette Soubirous, to whom Mary appeared in Lourdes. He noted that Mary identified herself as the Immaculate Conception, and the teenager relayed this information to the local bishop.

“Today, about 2 million pilgrims come to Lourdes every year,” said Father O’Connor, who is due to celebrate his 70th anniversary of ordination in the Congregation of Holy Cross next year. A book he edited, “The Dogma of the Immaculate Conception: History and Significance,” was first published in 1958 but has been reissued this year by the University of Notre Dame Press. 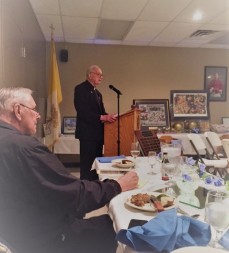 Father Edward O’Connor, CSC, speaks during the 52nd annual Lourdes Ball in South Bend May 20. Father Edward Krause, CSC, is seated in the foreground at the dais. The event, hosted by the Knights of Columbus Santa Maria Council 553, raised money to send a pilgrim to Lourdes, France.

Estimated receipts from the successful bidders totaled more than $1,500. Net receipts from ticket sales added to the ball’s total contribution. The Knights council said the funds will be provided for a Lourdes pilgrim yet to be chosen, continuing a tradition grounded in Lourdes’ history of miraculous healings of various sorts. One local couple attending the ball rose to give a testimony about how a family member whose pilgrimage was previously funded had experienced a healing in her relationship with the Lord.

Father Krause, ordained in 1967, has taught ethics and held leadership roles in a variety of Catholic organizations. He has served on the board of South Bend’s Apostolate of Divine Mercy in Service of Life, Marriage and the Family. He is a son of legendary Notre Dame Athletic Director Edward “Moose” Krause.

Father O’Connor is known for his love of Mary, the Holy Spirit and needy people throughout the area. For decades, he led the rosary recitation nearly every night at Notre Dame’s Grotto of Our Lady of Lourdes — a devotion frequently joined by Knights of Columbus.

K.C. Pocius, a longtime member of Council 553, and his wife, Toni, co-chaired the Lourdes Ball. Fourth Degree Knights from regional Assembly 242 began the ball with a ceremonial color guard, and attendees joined in the Pledge of Allegiance.

Separately, the Knights of Columbus organization nationwide co-sponsors a program that recently sent a group of military veterans as “American Warrior Pilgrims” to Lourdes.