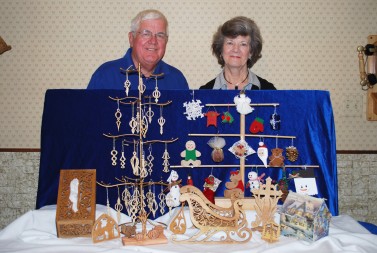 Kathy and Bob Kania exhibit some of the ornaments that are displayed on the Queen of Peace Parish Christmas tree.

The love of making homemade Christmas decorations began for the Kanias as children. As a youth, Bob liked to cut out wooden crafts on his father’s band saw. “I remember Christmases that were pretty slim from the gift standpoint. When I was 16 years old I made my mother a manger to place under the tree,” he recalls.

Family memories of the manger still linger as it was passed to his sister upon his mother’s death. During the Kanias first year of marriage, Bob made a manger for his family, which is still used today.

But Bob’s “bug” for crafting took a back seat to his job until about 20 years ago when he bought a scroll saw. Bob bought a couple of craft books and found that cutting wood was a much needed respite from the stress of his job. “I could come home in the evening and go down into my little world and cut wood and make some things,” he says.

His basement workshop completes Bob’s transformation as he lights a Christmas candle and listens to carols year round while cutting out Christmas ornaments.

It was while on a trip to Dollywood theme park in the Smoky Mountains of Tennessee that Bob’s love of wood cutting intensified. While visiting with a craft vendor at the park, he heard about a rebuilt RBI scroll saw in Georgia. Bob contacted the seller, purchased it, and “it has been my baby ever since,” he jokes.

With Kathy as a designer, Bob has made several Christmas wood ornaments that have intricate fretwork motifs. One of his most popular fretwork decorations is a sleigh. The idea for a sleigh came from his mother who recalled riding in a sleigh as a girl.
Bob has also made several Nativity Christmas ornaments. Kathy based one on a large three- dimensional outdoor wood scene that featured animals surrounded by trees.

“Kathy redesigned it with a stable surrounding Mary, Joseph and the baby Jesus in the middle. She reduced it on a Xerox and I cut out the pieces and glued it together. So the center, which was a wildlife pattern, is now a Nativity pattern,” Bob notes.

In addition to designing and painting the wooden ornaments, Kathy also makes Christmas ornaments using recycled and natural materials including milk weeds, Christmas cards, pine cones, dried flowers, brown paper bags and popsicle sticks. “I like to work with my hands and enjoy the satisfaction when you finish something,” she says.

One of the greatest joys of making ornaments comes when the ornament is personalized. The Kania children and grandchildren have ornaments reflecting a special memory or event during the year.

“For example I made a school bus when they started school, an ornament recognizing the loss of a first tooth, and an ornament with the date they took their first step,” says Bob.

This year one of the Kania granddaughters received a blue ribbon at the 4-H fair. “So we cut out a wooden shamrock with a blue ribbon on it for her,” Kathy explains.

Bob recalls one year when a coworker asked him to make 10 sleighs (each sleigh takes about 12 hours to complete) in October to be finished by Christmas. Since Bob also serves as a referee for high school football games during that period, it was a challenge to complete the sleighs on time. But knowing they were going to give his friend pleasure was the incentive to accept the job.

“The neat part of making sleighs or any ornament for people is you think about the individual you are making it for. Just knowing I’m making it for somebody I know or care about makes it special for me,” he says.

The Kanias’ love of Christmas decorations has extended to include a donation of over 100 of their painted wooden ornaments that are used on a 12-foot tree at Queen of Peace Parish. The tree is usually put up just before Christmas Eve, so not to distract from the solemnity of the Advent season.
The fellowship among the parishioners that goes with putting up the tree’s lights, ornaments and decorations makes the occasion very special. Bob notes that Queen of Peace parishioner Joe Valentine, whose wife passed away a few years ago, eagerly looks forward to putting up the tree each year.
“Joe will hold the lights as I am stringing them, and places ornaments on the tree. For him, when he goes to midnight Mass, there is a sense of pride in knowing he had something to do with the tree.”