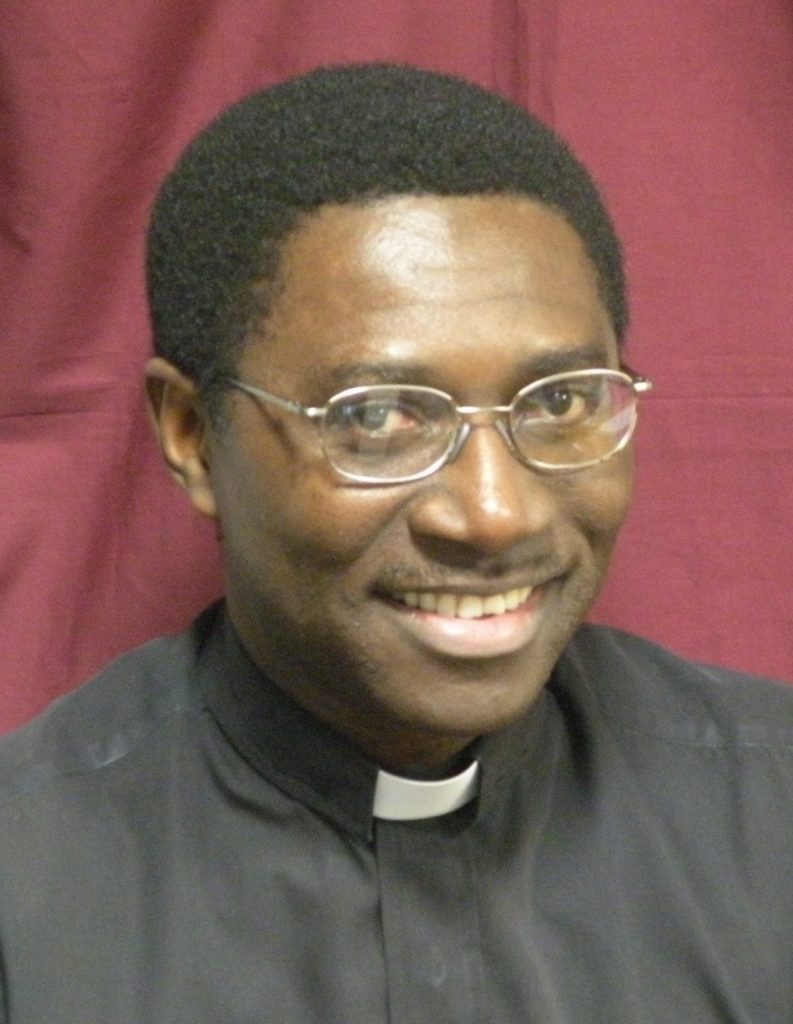 Father Francis Chukwuma didn’t have a vision or encounter with God that called him to the priesthood. He has just been open to where God directs him in life.

Father Chukwuma, who this year celebrates 25 years as a priest, said God’s direction has taken him from his hometown in Nigeria to the seminary and ordination, to studies in Nigeria and Rome to become a canon lawyer, and to the United States and the Diocese of Fort Wayne-South Bend, where he has served since 2008.

“I feel very, very grateful to God for revealing a little bit of Himself to me,” Father Chukwuma, 52, said. “God has given me this opportunity because He loves me.”

His anniversary year also will be one of change: Bishop Kevin C. Rhoades earlier announced that, effective June 15, Father Chukwuma would move from pastor of St. John Bosco Parish in Churubusco and Immaculate Conception Parish in Ege to become parish administrator of Most Precious Blood Parish in Fort Wayne. Father Chukwuma also will continue his work at the diocesan Marriage Tribunal, where he has served since the day after arriving in the diocese in 2008.

Born in the town of Ichida in Anambra state in eastern Nigeria, Father Chukwuma literally grew up next door to the Catholic church his family attended. Even if he hadn’t gone to church, he said, he still would have heard the pastor celebrating Mass, the readings and the singing.

He credits his family with playing a major role in his faith journey.

“My parents would go to morning Mass every day before they would go to work, so it was sort of like we all had to go,” he recalled. Father Chukwuma is the second-oldest son among his parents’ seven children. All of his siblings still practice the Catholic faith, he noted.

He also was influenced by an uncle who was a priest. The uncle, who since has died, visited often and was fun to be around, Father Chukwuma said. He respected his uncle and thought the priesthood seemed like a good life.

He applied to seminary, however, because two of his good friends planned to go, he said. The friends ended up not going, but he decided to see what seminary was like. He was ordained Aug. 7, 1996, in St. Patrick’s Cathedral in the city of Awka in the Diocese of Awka.

“When the bishop ordained me, that was when I knew God was calling me,” Father Chukwuma said.

Looking back now, he said he can see that, if God calls you to the priesthood, he follows you and calls you back if you start to get off-track.

He also believes the Holy Spirit works through Church authorities, such as his home bishop and Bishop Rhoades, so he goes where they send him.

“At the end of the day, we live for God’s people,” he said of being a priest. “He directs me to these places.”

Even if he touches the life of only one person, that is one of God’s people, he said.

“I am willing to be that instrument He uses to touch His people, to help them know Him better,” he added.

After his ordination, Father Chukwuma said his bishop asked him to attend a university to study to become a canon lawyer, an expert in Catholic Church law. In three years, he earned three master’s degrees — in religion, philosophy and canon law. He then served as pastor of a parish in Nigeria for five years.

Father Chukwuma knew he eventually would be sent outside Nigeria to earn his doctorate in canon law. He thought he would go to Europe. Instead, his bishop requested he go to the Diocese of Fort Wayne-South Bend.

After arriving in Fort Wayne, Father Chukwuma lived at Cathedral of the Immaculate Conception Parish and worked at the diocese’s Marriage Tribunal. From 2009-13, he continued at the tribunal and served as pastor of St. Joseph Parish in Bluffton.

In 2013, he began three years of study in Rome to earn his doctorate in canon law. Afterward, he resumed work at the Marriage Tribunal in Fort Wayne and was assigned as pastor of St. John Bosco in Churubusco and Immaculate Conception in Ege.

Father Chukwuma brought “a lot of much-needed energy” to Immaculate Conception Parish, and it seems like his mission with the parish isn’t completed yet, said Judy Egolf, a parish council member and the parish director of religious education.

“Father Francis has always encouraged me, as well as others from Immaculate Conception, to have faith in ourselves and to try new things to be more involved with our Church,” Egolf said. “His excitement for the love of God and serving others has always been a wonderful example to me as how to live my Christian life. I always leave Mass renewed in my faith and stronger as a person after his sermons.”

Father Chukwuma’s positive outlook and sense of humor engage people, said Ceil Parker, president of St. John Bosco’s parish council. He relates well to young people and drew some of them back to the parish along with attracting a few young families.

He also asked parishioners to get involved in various ministries, including some people who hadn’t been active previously, and they did great work, Parker said.

“He is very knowledgeable about Scripture and can bring it into today’s world,” she noted.

“During COVID, he was right on top of everything,” she added. “He contacted me and said, ‘We need to reach out to parishioners.’”

For Father Chukwuma, the joys of priesthood include being able to pray and meeting people who are at different stages in life and in their journeys of faith. Those experiences also help him grow as a person and in his relationship with God, he said.

“It helps me see the magnitude of God, His kindness, His mercy, His love for everyone,” he explained.

Through his ministry, he hopes people feel God’s presence again in their lives, gain hope and feel they can do better.

Looking to the future, Father Chukwuma has considered organizing his thoughts on faith into a book. People then could pull ideas from the book to enhance their faith lives, he said.

As with everything else, though, he will submit it to God to see if it is His will.

“I move at God’s direction,” he said.