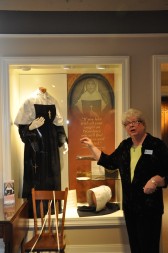 Providence Sister Jan Craven, coordinator of the Shrine of St. Mother Theodore Guérin, describes the replica of the saint’s habit during the shrine’s open house on Oct. 25.

SAINT MARY-OF-THE-WOODS — In the 1840s, one might see Mother Theodore Guérin at Saint Mary-of-the-Woods under the leaves of the linden tree she brought with her from France, surrounded by the walnut trees that populated the western Indiana landscape.

Today one can still see her there lying under linden leaves and surrounded by walnut wood.

The difference is that the founder of the Sisters of Providence of Saint Mary-of-the-Woods is now a saint herself, and the linden and walnut make up the chapel in the new shrine dedicated for the reverence of her holy remains.

The final part of the new, permanent shrine for Indiana’s only saint opened on Oct. 25. According to Providence Sister Jan Craven, coordinator of the shrine, around 550 people traveled to Saint Mary-of-the-Woods near Terre Haute for the grand opening.

Their journey did not stop at the doors of the shrine.

The journey — and the shrine itself — actually begins at the entrance of the Providence Spirituality and Conference Center on the grounds of the Sisters of Providence’s motherhouse and proceeds to the Ministry Circle, which describes the various ministries of the sisters.

Next on the indoor journey is a long corridor with signs and audio-narrated dioramas depicting St. Mother Theodore’s life and the history of the order she founded.

The hall leads to the culmination of the shrine — the most recently opened portion located under the sister’s Blessed Sacrament Chapel.

“The Blessed Sacrament was near and dear to (St. Mother Theodore’s) heart,” said Sister Craven.

The first room of the newest part of the shrine, the French Room, tells the story of Mother Theodore’s life in France, her native country where she lived from 1798-1840.

Around the corner from the French Room is the Ship Room, depicting the size of the berth Mother Theodore and her sisters used during their journey across the sea to America.

Next, visitors enter the Immersion into the Forest Room along one side of the shrine. The room gives visitors a feel for the densely forested, frontier region that Mother Theodore and her sisters found themselves in upon their arrival at Saint Mary-of-the-Woods.

But the journey of Mother Theodore met with some resistance, as depicted in the next section of the shrine, called Immersion into Suffering.

After passing a small prayer room, visitors enter the centerpiece of the shrine — the chapel containing the remains of the saint for prayerful veneration.

Her remains were transferred from her temporary shrine in the Church of the Immaculate Conception to the new chapel in the shrine on Oct. 3, her feast day.

On Oct. 22, Founding Day for the Sisters of Providence, Bishop Christopher J. Coyne, vicar general, represented Archbishop Joseph W. Tobin in providing the official blessing of the shrine by the archdiocese.