Huge. The numbers are huge. And sad. Fort Wayne, the “City of Churches,” is trying hard to not also be known as a hub of human trafficking. The underworld economy of human trafficking is illicit, a world where profit is king, and drugs are often used to control victims stripped of their humanity and objectified. Credit Bill Duffy of the University of Saint Francis, Fort Wayne, for getting involved in this issue last year and for encouraging students to follow suit.

Duffy, a counselor and instructor with USF’s TRiO (Student Support Services) office, became interested in the problem, which continues to grow nationally, two years ago when the university’s Mission and Values Integration Committee was considering what to select for its annual project to put the Franciscan values to work. It was Duffy’s idea to spotlight human trafficking, both as a way of raising community awareness and also to honor St. Josephine Bakhita. She became the patron saint of the group “Josephine’s Hope,” of which Duffy is project director. 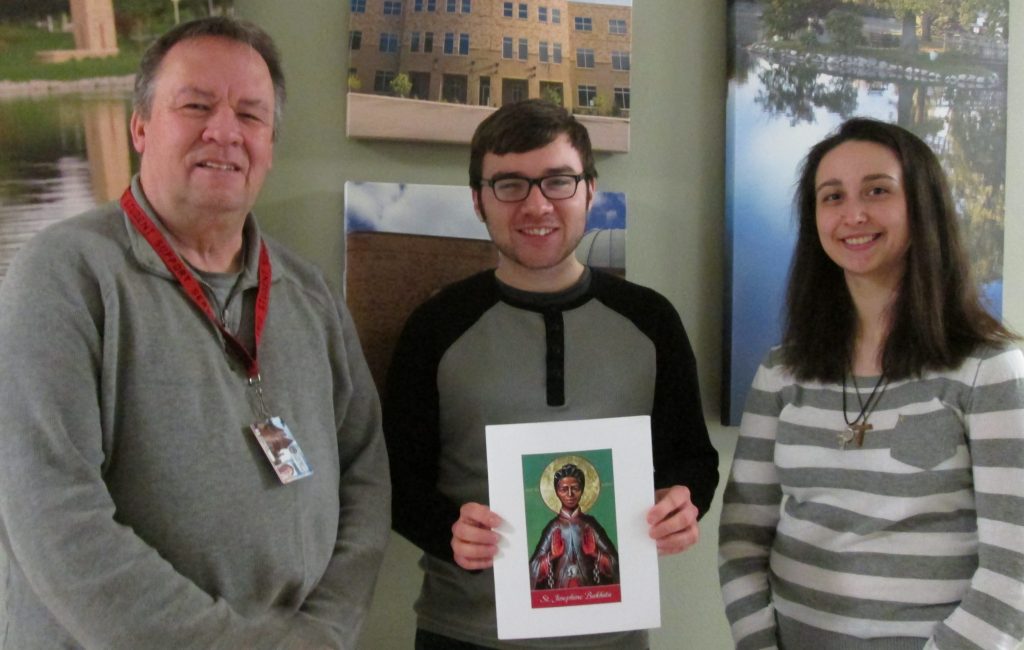 University of Saint Francis counselor and instructor Bill Duffy and students Lance Roberts and Mariah Escamilla gather at USF’s Trinity Hall in Fort Wayne. The three and others are part of an initiative called Josephine’s Hope, which aims to increase awareness of human trafficking on the local, national and international level and contribute to its eradication. — Barb Sieminski

In 2007, Duffy read “Spe Salvi,” the encyclical by Pope Benedict XVI that includes the story a Sudan girl’s 12 years of bloody floggings, torture and enslavement. When the girl finally escaped, she became a nun with the Canossian Daughters of Charity and was canonized by Pope John Paul II.

According to Duffy, when St. Josephine was telling her story to her Canossian sisters, she made the comment: “I was in the mud, but I never got dirty” – in other words, she had been able to preserve her virginity.

“Her story as told by Pope Benedict, is so incredibly compelling as to be unforgettable,” said Duffy, who himself wrote a prayer book, “Awaited by This Love,” in her memory.

Now an annual awareness campaign on campus, “our focus for next year’s Josephine’s Hope is going to be on pornography and its connection to human trafficking,” said Duffy. “Rachel Moran, author of ‘Paid For,’ hammers away at this point in her book: pornography, strip clubs and prostitution are all the same. They all involve the objectification of women for money. Our own campus pastor, Father David Meinzen, refers to pornography as the gateway to other forms of human trafficking.”

It’s impossible to know exactly how many victims there are, anywhere, however, because 80 percent of sex trafficking is done online, said Duffy.

“Law enforcement is constantly on the lookout for new sites. Last year, the FWPD indicated they worked 15 sex trafficking cases involving 11 victims and 23 arrests. Cathie Bledsoe of the Indiana State Police says that on any given day there are between 250 and 450 children alone advertised for sex online from 10 Indiana cities, with somewhere between 25-40 of those in Fort Wayne.

“Anyone in law enforcement will tell you that these numbers barely scratch the surface in terms of what is actually going on out there.”

Mariah A. Escamilla, a music technology sophomore at the University of Saint Francis, initially discovered the magnitude of human trafficking by following the band Remedy Drive.

“The lead singer of the band, David Zach, works for and is a lead advocate for the anti-human trafficking organization, The Exodus Road (www.theexodusroad.com/). This group works primarily in areas of Southeast Asia, India and the Americas to rescue those who are trafficked,” said Escamilla, an Auburn resident.

Escamilla was inspired by the humanitarian organization, whose rescue efforts include prevention, rescue and support.

“Because this is an ever-growing problem, I was able to cultivate a heart for these victims of modern slavery and knew I had to help with the fight to end this evil of forced sexual exploitation,” she said.

Escamilla is also a volunteer with a local Fort Wayne branch of the organization Destiny Rescue, which focuses on “rescuing, restoring and protecting those enslaved by the horrors of human trafficking.”

“In volunteering with this group, I go to various schools, churches and events running a jewelry table, which includes jewelry made by the girls in the safe homes that Destiny Rescue provides for them. They learn vocational and trade skills in those safe homes as a part of the restoration for these girls to be integrated back into society. All the funds made from the sales go directly to their ministry of rescuing, protecting and restoring these girls that have been affected by sex trafficking.

“It’s been an issue that has weighed heavily on my heart. I continue to pray for these victims and for the end of human trafficking as a whole. The goal of our ministry is to allow each and every one of these victims to experience God’s love in their unique dignity as a person who deserves to be loved. Also, learning about St. Josephine Bakhita and how encouraging her life is to have lived in the darkness of slavery and yet still was able to discover a great light. God has put this issue on my heart and I want to do something about it.”

“In exploring the life of this saint and gaining new insights on this societal plague, I pondered more deeply what spiritual poverty means, as well as all the blessings that we are so apt to take for granted,” said Roberts. “I had the honor of joining the Church during Easter of last year, and participating in Josephine’s Hope alongside RCIA proved a fruitful way of exploring my newfound faith. Bill was a constant source of spiritual encouragement throughout the process.”

Fundamentally, Josephine’s Hope is all about spreading information, said Roberts.

“Not everyone actually knows how widespread this ubiquitous crime is in our country, let alone the world. It is truly tragic that so many children – the very essence of innocence – suffer without our prayers and our attention. To that end we have embarked on a campaign of awareness. Bill’s prayer book features some reflections taken not only from Bakhita’s life, but also from some modern trafficking victims.”

“Sex trafficking is a business coerced by manipulative men driven by greed and a disgusting desire for this commercialized sex industry,” added Escamilla. “These traffickers only care about the supply and demand of this business that brings in billions of dollars annually. Trafficking humans becomes more profitable than illegal drug trafficking in the sense that they are able to sell the same person over and over again at the disposal of the buyer.”

“Frequently, girls who have been brought to foreign countries are in situations where they are not able to escape from their pimps. This is why we work so hard to get these victims out of these situations because they are forced to be sex slaves in the brothels and red-light districts,” she continued. “It’s a really sketchy business that involves a hierarchy of pimps, recruiters, traffickers and middle men. All for the purpose of stripping away a person’s dignity through physical violence, manipulation and psychological coercion for the purpose of commercialized sex which generates billions of dollars per year. There is also a problem with labor trafficking which is a whole other thing in itself.

“Most of the time sexual slavery victims are going to be young girls in vulnerable positions such as runaways, low-income areas, and areas where there is poor education. In other countries such as Thailand and Cambodia these girls are coerced into this industry because they believe there is nothing else they can do to provide for themselves or their family as the income stream from the sex industry continues to flourish. Through Josephine’s Hope we continue to be the voice for those that are trapped in this kind of slavery. Whoever is affected by this, we want to help.”