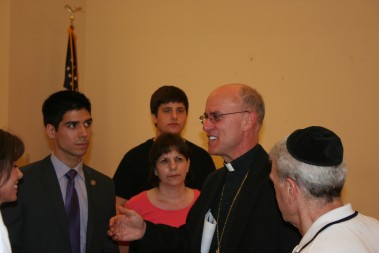 Karen Dwyer Bishop Kevin C. Rhoades talks with a group of people who attended his talk at The Jewish Federation of St. Joseph Valley in South Bend.

SOUTH BEND — “As Catholics and Jews, we share a common heritage through the parts of the sacred Scripture we hold in common. We pray to the same Lord. We share the belief in the Ten Commandments from the Torah of Moses that Pope Benedict XVI called, ‘a great ethical code for all humanity,’” Bishop Kevin C. Rhoades said as he spoke at the Jewish Federation of St. Joseph Valley in South Bend.

Bishop Rhoades spoke to an audience of more than 100 people — both Catholics and Jews — on the topic, “The Challenge of Secularization to the Future of Faith-Based Communities” on March 21 in South Bend.

In his opening remarks, Bishop Rhoades said, “I give thanks and praise to God for this opportunity to be here this evening, to share thoughts with you, my brothers and sisters of the local Catholic and Jewish communities. It is an honor to be here.”

“I recall the words Blessed John Paul II when he visited the synagogue of Rome in 1986,” Bishop Rhoades said. “I was a young priest studying in Rome at the time. Pope John Paul said on that historic occasion, ‘The Jewish religion is not extrinsic to us (the Catholic Church), but in a certain way is intrinsic to our own religion.’ With Judaism, therefore, we have a relationship, which we do not have with any other religion. You are our dearly beloved brothers and, in a certain way, (Blessed Pope John Paul said) it could be said that you are our elder brothers.”

In his remarks, Bishop Rhoades focused on explaining the position of the Catholic Church on the recent mandate of the U.S. Health and Human Services.

Bishop Rhoades said, “This issue is not just about sterilization, abortifacients and chemical contraception. It’s about religious freedom, our sacred right.”

Bishop Rhoades concluded, “We share a common respect for the sacred nature of our culture, we must stand united as brothers and sisters against forms of secularism that attempt to exclude religion from public life and in defense of religious liberty.”

The question-answer session provided an opportunity for both Catholics and Jews to engage in dialogue with the bishop on this and other issues.

Of special interest is the Michiana Jewish Film Festival at the Debartolo Performing Arts Center at the University of Notre Dame from May 15-18, and a screening of the film “Iranium” at the Federation May 31. The film details the threat of a nuclear-armed Iran.

Event chair Barabara Lerman said, “The evening offered an opportunity for Bishop Rhoades to get acquainted with the Jewish community, and for the Catholic and Jewish communities to share thoughts and have dialogue on some common concerns.”