INDIANAPOLIS (CNS) — It was April 4, 1968. Twenty years old at the time, Charles Guynn and his fiancee, Mary, were at a skating rink in Indianapolis when suddenly the music stopped.

“The guy who was spinning the records made the announcement,” he recalled: the Rev. Martin Luther King Jr. had been assassinated.

“I can’t even express how I felt,” Guynn said, starting to choke back tears 50 years later. “What do you say when you lose someone who gave you so much and never expected anything in return?” 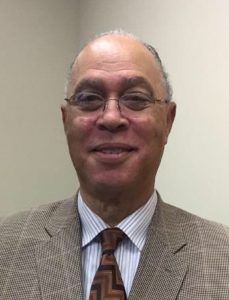 Charles Guynn, a 70-year-old member of St. Rita Parish in Indianapolis, knew the Rev. Martin Luther King Jr. personally. Twenty years old at the time, Guynn and his fiancee, Mary, were at a skating rink April 4, 1968 in Indianapolis when they heard Rev. King had been assassinated. (CNS photo/courtesy The Criterion)

The 70-year-old member of St. Rita Parish in Indianapolis knew Rev. King personally. His multiple interactions with the renowned minister and civil rights leader over the course of several months in 1967 and 1968 left a lasting impact on the African-American Catholic.

Through his involvement at St. Rita and his friendship with the parish’s then-pastor, Father Bernard Strange, Guynn came to know quite a few movers and shakers on the local and national civil rights front in the late 1960s.

One of those activists was Father Strange’s friend, the Rev. Andrew Brown, then-pastor of Indianapolis’ St. John’s Missionary Baptist Church. In the late 1960s, the church was ground zero for much of the planning of the civil rights movement in the city, the state and even the nation.

Father Strange invited Guynn to join him at the meetings. There he met Rev. King, a close friend of Rev. Brown’s.

He recalled joining “both black and white” priests, Protestant ministers and Jewish rabbis for these planning meetings.

“They were planning for civil actions: How to approach the legislature, deciding what the issue was, which legislator to approach on an issue,” Guynn told The Criterion, newspaper of the Indianapolis archdiocese. “Would there be a demonstration? Would it be in Indianapolis or down South in Alabama or Mississippi?

“The whole idea of (Rev.) King was to get away from that area (in the South) to plan, then take the plan back to those areas.”

At age 19, he took it all in stride. “Back then, I did not even begin to understand (Rev. King’s) greatness and what he was doing,” Guynn said. “I thought he was just another minister, because I met many ministers who came through St. John’s to visit.”

He said he saw Rev. King enough “that he developed a nickname for me. He called me Chuckie. I think he knew I hated that. He’s the only one I let call me that.”

Guynn said he “became captivated with (Rev. King’s) sensitivity toward his fellow man. He was really strong on that and really strong on rights, that all people deserve their rights. I never saw any kind of prejudice or racism come from him.

“It sounds cliché now, but I knew he was something special. It just oozed from him. He was very real. I have to say he was a holy man. He sacrificed his life, his family, his kids for the good of others.”

Guynn said he himself was “a bit of a lightning rod,” with “a style more like Malcolm X. ‘You got to do something! You can’t just let people hit you and spit on you!’”

Those who promoted violent retaliation eventually were at odds with Rev. King, “who was about truly turning the other cheek. He didn’t react to violence with violence,” Guynn said. “I found out from him that violence on violence only leads to violence. Instead, he talked about the idea of forgiveness.”

On occasion, Guynn did hear Rev. King raise his voice. He recalled a particularly tense meeting in the basement of St. John’s when “one group of ladies came down, and they were upset with his stance (against abortion). That was a pretty ugly meeting.”

“He was very anti-abortion. He saw that as murder. He said it was anti-Christian, anti-human. He called some ministers hypocrites because they were condoning this pro-abortion attitude,” Guynn added.

Rev. King also believed in “women being paid the same as men, and he talked about men’s responsibility to be real men.”

He recalled Rev. King’s advice: “Before you do anything, do your homework.” “Understand who you’re going before, their strengths and weaknesses.” “Make sure you deliver your message in an articulate way.” “Understand where the kids are, so you can … better give them guidance.”

Rev. King’s words and his peaceful, yet powerful activism, made a lifelong impact on Guynn.

He has long been active in his parish, his community, his city and at the national level.  A former national secretary of the Knights of Peter Claver, he once met with St. John Paul II to discuss the importance of black Catholic leadership in the United States.

“It’s why I was involved in community action,” he said of Rev. King’s example. “Anything dealing with the betterment of the community, I want to be part of it.”

Natalie Hoefer is a reporter at The Criterion, newspaper of the Archdiocese of Indianapolis.