INDIANAPOLIS (CNS) — An Indiana trial court May 7 dismissed the lawsuit of a former Catholic high school teacher in Indianapolis who said he was fired in 2019 because of his same-sex marriage.

Joshua Payne-Elliott, who had been a world language and social studies teacher at Cathedral High School, claimed the Indianapolis archdiocese illegally interfered with his job.

A trial court had initially ruled that the lawsuit could move forward, but the Indiana Supreme Court sent the case back down and authorized the trial court to reconsider.

“This has always been a very simple case,” he added, “because the Supreme Court has repeatedly affirmed the freedom of religious schools to choose teachers who support their religious faith.” 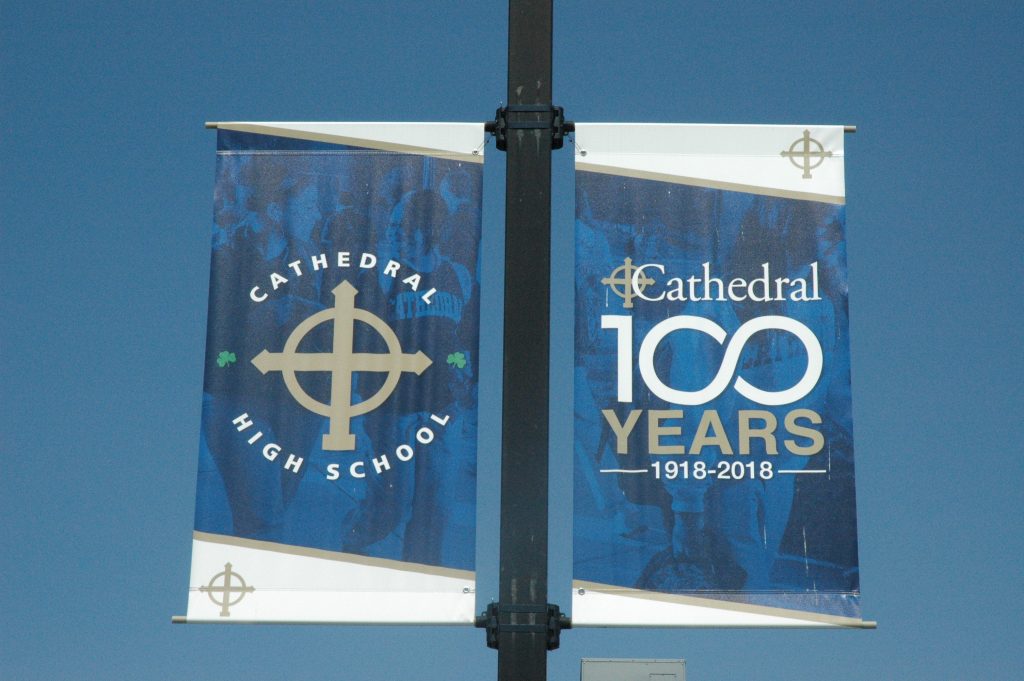 A banner for Cathedral High School in Indianapolis is seen in this 2018 file photo. An Indiana court dismissed a lawsuit from a teacher at the school May 7, 2021, who said he was fired because of his same-sex marriage. (CNS photo/John Shaughnessy, The Criterion)

School officials announced in 2019 that it had rescinded the teacher’s contract based on the contract’s morality clause but according to the lawsuit, when the school renewed Payne-Elliott’s annual teaching contract, it did not include the morality clause that a same-sex marriage would violate.

The Indianapolis Star daily newspaper said Lance Hamner, a new trial court judge assigned to the court case, dismissed it, citing two trial court rules but without any other explanation.

“The decision itself offers no reason, no rationale, no basis. We have no way to know how the judge got to the decision,” Kathleen DeLaney, the attorney representing Payne-Elliott, told the newspaper. She also said the teacher is considering appealing the decision.

In 2019, the U.S. Department of Justice filed a “statement of interest” in the lawsuit brought against the Archdiocese of Indianapolis by Payne-Elliott. It urged the Indiana court to stay out “of deciding what it means to be Catholic.”

“The First Amendment demands that this lawsuit be dismissed,” it added.

Two years ago, officials at Cathedral High School, which is affiliated with but not sponsored by the Holy Cross Brothers, explained in a letter to the school community that they had made the “agonizing decision” to follow the direct guidance they had been given by Indianapolis Archbishop Charles C. Thompson and “separate from the teacher” after 22 months of “earnest discussion and extensive dialogue with the Archdiocese of Indianapolis about Cathedral’s continued Catholic identity.”

School officials said they made this decision “in order to remain a Catholic Holy Cross School.”

The letter, signed by the high school’s president and chairman of the board of directors, said if they had not made this decision, Archbishop Thompson had “made it clear that Cathedral’s continued employment of a teacher in a public, same-sex marriage would result in our forfeiting our Catholic identity due to our employment of an individual living in contradiction to Catholic teaching on marriage.”

Days before Cathedral High School fired Payne-Elliott, Archbishop Thompson took away the Catholic status of Brebeuf Jesuit Preparatory School in Indianapolis when the school refused to dismiss a gay employee in a same-sex marriage, Layton Payne-Elliott, the spouse of Joshua Payne-Elliott.

In a news conference after the two decisions were announced, Archbishop Thompson said the issue involving the two schools came down to the Catholic Church’s teaching on marriage.

While stressing that “one’s (sexual) orientation is not a sin,” the archbishop said the issue involving the two schools “is about public witness of Church teaching on the dignity of marriage as (between) one man and one woman. That is our Church teaching.”

“In this particular case we’re dealing with, those are ministers in our Church. Teachers, guidance counselors, other leaders, leaders of the schools and other leaders in the archdiocese are bound to live out these principles,” he said.

In 2019, the Midwest province of the Society of Jesus, which administers Brebeuf, appealed the decree taking away the school’s Catholic status to the Vatican Congregation for Catholic Education. In late September of that year, the congregation announced it was temporarily lifting the decree until it makes a final decision. A final decision has not yet been announced.