NOTRE DAME (CNS) — Much as she did in her 33 years as the University of Notre Dame’s highly successful women’s basketball coach, Muffet McGraw still pays close attention to numbers that tell a story.

But now her focus is on hunger stats.

In her coaching days, numbers for her meant keeping close track of points per game, field goal percentages, free throw percentages and how the skills of her own Irish players were adding up.

Careful attention to those numbers as well as her charismatic leadership of young women athletes led McGraw’s teams to nine Final Fours, seven championship game appearances and two national championships — in 2001 and 2018.

It also earned her many coaching awards and a place in the Naismith Memorial Basketball Hall of Fame in 2017. She compiled a 905-272 record through 32 seasons.

After she retired as coach in April 2020, life changed considerably for McGraw. 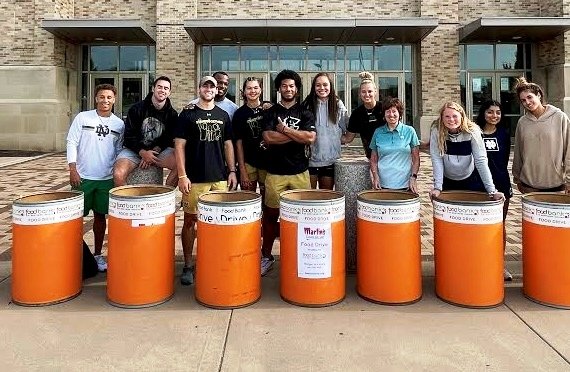 Muffet McGraw, in blue shirt in the front row, is seen with a group of athletes at the University of Notre Dame in South Bend, Ind., in this undated photo. McGraw has focused on addressing hunger in America and helping with food drives in South Bend since she retired in April 2020 after a highly successful 33-year career as Notre Dame’s women’s basketball coach. (CNS photo/courtesy Muffet McGraw)

She began teaching a class on sports leadership in Notre Dame’s Mendoza College of Business. And, in those early months of the pandemic, she decided that she had to contribute her energy and leadership skills to addressing hunger.

Not surprisingly, she’d been paying close attention to hunger statistics — both nationally and in her own community.

When the pandemic started,” she explained, “I kept seeing reports on the news about the food banks and how many people were looking for food. I do some research online, but I like to know what’s going on in my local community.

“So, every time I would go to the Food Bank of Northern Indiana, I would ask them, ‘Well, how many people came by in the drive-thru? How many pantries are open? How many people do you expect to serve at Thanksgiving? How many school lunches are we packing this year?’”

“I wanted to keep updated. The numbers were astounding,” she told Catholic News Service. “You might look around your neighborhood and think, ‘Well, everybody here is fine.’ But, they might not be.

“The thing about the pandemic and with people losing their jobs is that you really don’t know who is doing fine.” 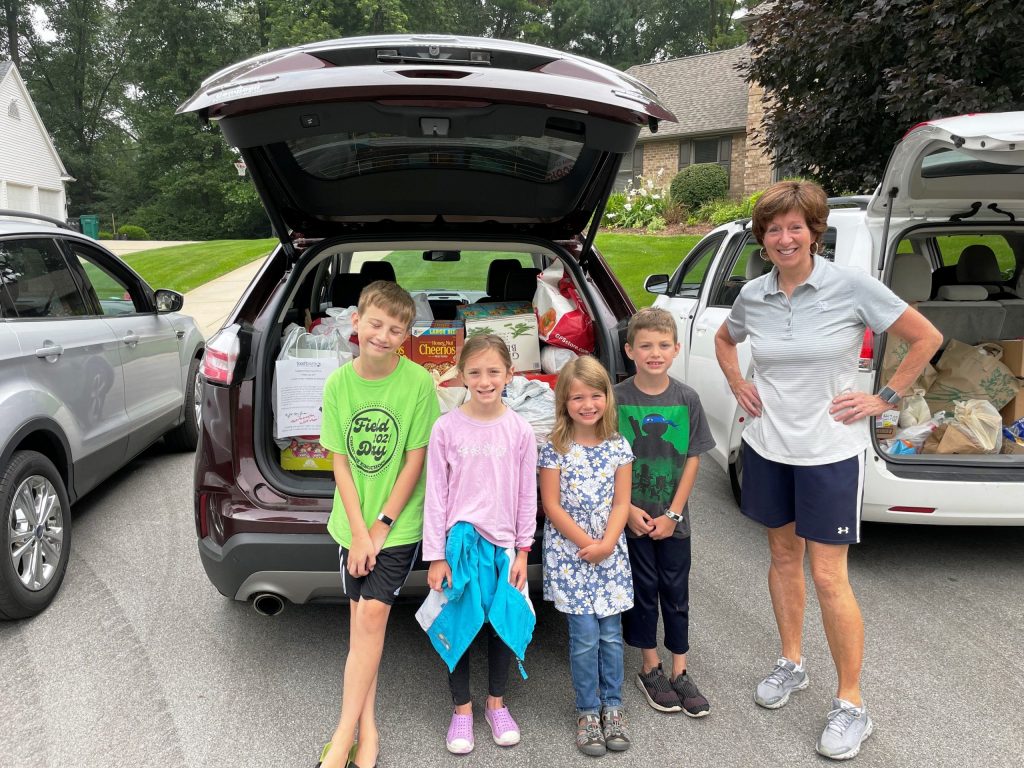 Muffet McGraw, right, seen in an undated photo with young volunteers helping with a food drive, has focused on addressing hunger in America and helping with food drives in South Bend, Ind., since she retired in April 2020 after a highly successful 33-year career as the University of Notre Dame’s women’s basketball coach. (CNS photo/courtesy Muffet McGraw)

McGraw was already a familiar face at her community food bank, an organization that serves six northern Indiana counties where nearly 13% of the population is said to be “food insecure.”

“As coach, I would often take the team down to the food bank,” she pointed out. “We’d pack school lunches for kids, and load and unload food when it was delivered. I thought it was good to get team members involved in a little community service and they always enjoyed it.”

However, McGraw knew that she also had to do something on her own. Soon after announcing her retirement, she began collecting food in her own neighborhood and then in other neighborhoods in South Bend where she and her husband, Matt, have lived for many years.

“I just went and stuffed mailboxes with fliers about a food drive but I didn’t know how they were going to turn out. The first time,” she laughed, “I think I got only 150 pounds of food!” However, in the year and a half since that first food drive, she’s done more than 30 more neighborhood food drives and contributed the food to the local food bank.

“Everybody can start in their own neighborhood,” she’s quick to tell people. “Lots of neighborhoods have their own homeowner’s Facebook pages or websites. You don’t necessarily have to print up fliers.”

And what’s the recommended game plan? “Start where you are!” 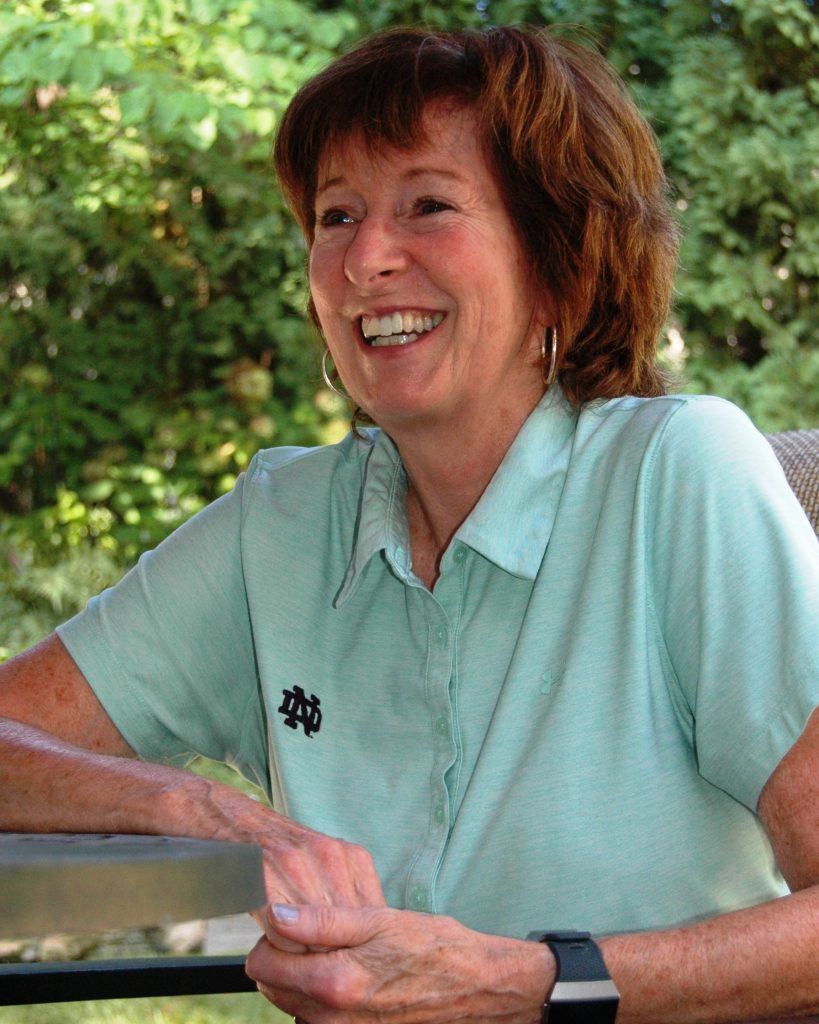 In retirement, McGraw still pays close attention to numbers: stats on hunger in America. She is involved in food drives in South Bend, Ind., and at Notre Dame to help replenish food pantries, especially during the pandemic. (CNS photo/Bill Odell)

When Notre Dame saw their legendary Coach McGraw taking the local offensive against hunger, the university’s alumni association offered to help. Meals with Muffet — https://mealswithmuffet.nd.edu — was founded in 2020 to promote food drives among the university’s large network of active alumni clubs and among other interested groups.

Because September is “Hunger Action Month,” a national campaign, Notre Dame alumni clubs were encouraged in 2020 and 2021 to host September food drives and report their food totals to Meals with Muffet. When they did, they were automatically registered for prizes.

Meals with Muffet also was designed to collaborate with other Notre Dame-linked groups — Holtz’s Heroes and Bread of Life Food Drive.

In 2020, Meals with Muffet reported that almost 150,000 pounds of food and $85,000 were collected by Notre Dame alumni clubs and other groups to fight hunger around the country.

McGraw believes that the larger American Catholic community also could really help to address hunger in the U.S., with parishes, schools, established groups like the Knights of Columbus stepping in to help on the local levels.

“I think we need a call to action, and as a Catholic, I think the way you live your life and serve people who need help defines you,” she said. “And this would be such a great way to teach our kids about giving back, about community service and about the fact that everybody doesn’t have it as good as they do. I just wish that more people would see this as really important.”

Coaching others to be and do their best is second nature for McGraw. Nonetheless, she concedes that some people may be hungry or needy because, as she put it, “they’re holding themselves back.”

She quickly added, “I would love to coach them and encourage them to stop making excuses for themselves and to be accountable. I do worry about the future a bit because there is a lot of ‘woe is me’ and ‘there’s nothing that I can do about my situation.’”

On the other hand, as she sees it, “there are also a lot of people who are working two jobs who still can’t afford to feed their families. I think that some of us don’t see or understand that. Whatever it is, we have to feed people if they’re hungry.”

“And wouldn’t it be great,” McGraw said, issuing a challenge, “if we could just take care of everybody in our own communities?”