“If you told me five years ago that I’d be on a stage in Panama talking to you about marriage, I would have said you’re crazy,” said Drew Dillingham, 28.

During the Jan. 23 Fiat Festival, sponsored by the Fellowship of Catholic University Students, the Knights of Columbus and the U.S. Conference of Catholic Bishops, Dillingham and his wife Kim, parishioners at Immaculate Conception Parish in Washington, D.C., took the stage.

Five years ago, Drew said, he had been working on a congressional campaign for a losing candidate and had asked his friend if he could sleep on his couch in Washington temporarily. 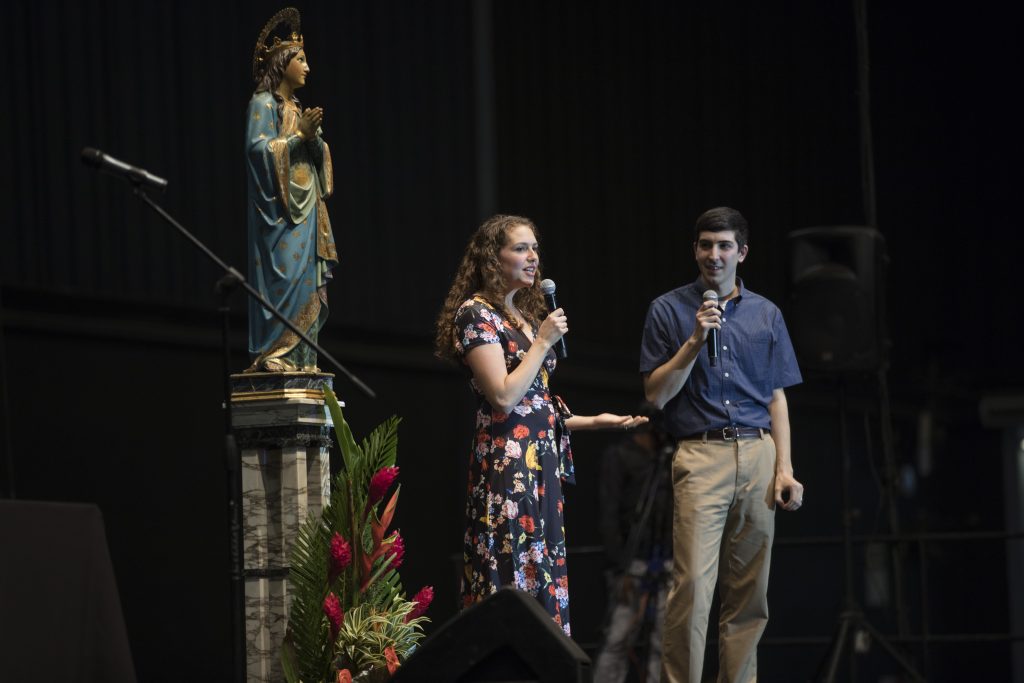 At the same time, Kim, who is now 27, had just graduated and moved to Washington to start her first job, and by the world’s standards she was doing well. She had a job that was making good money and had great friends, but “deep down I felt unfulfilled and a little lost,” she said.

One of her friends encouraged her to start rediscovering the Catholic faith, and as she began to read and pray, she “started to slowly open myself up to God, and pretty much immediately he transformed my life.”

She soon got an email from her former college chaplain inviting her to the new St. John Paul II National Shrine in Washington, an invitation she said she would have turned down if it had come just a few months earlier. But because God had already been working on her heart, she decided to go.

Meanwhile, Drew’s friends also invited him to that shrine. The couple met there and began to date. At the beginning of their relationship, Drew decided that he wanted to make sure God was at the center of their relationship, which he had never done before in other relationships. To do this, they committed to three main things, he said: putting prayer into all their dates, going to Mass every week together and remaining chaste.

Those three “yeses” to God “really strengthened our relationship and helped us discern our vocation to marriage,” he said.

Ten months after they began dating, Drew and Kim got engaged, and soon started facing a lot of questions from people around them. Though these questions sometimes gave her some doubt, Kim said ultimately, “I knew that God was calling us to embrace our vocation.”

Since they had met at the St. John Paul II National Shrine, they chose that saint’s feast day, Oct. 22, 2016, as their wedding day.

“Marriage teaches you what the definition of love is,” said Drew. “Love isn’t just a feeling … love is much deeper than that.”

Love, he said, is about sacrificing for one another; about being on the same path to heaven and carrying out God’s will on Earth.

Through the sacrament of marriage, they also received the grace to be open to life, and although the world told them to delay the sacrifices involved with having children, they now have a 9-month-old daughter.

Deciding to accept this invitation to speak at World Youth Day was another “yes” to God, because when they were asked to speak, Kim said her first reaction was to wonder “Why us? We are just an average couple.”

But as they thought about it, they realized, “God has given us so much,” including each other and their daughter, and “it felt like an opportunity to give back to him and glorify him,” Kim told the Catholic Standard, newspaper of the Archdiocese of Washington.

Because he had noticed that a lot of people are afraid to get married, Drew said he felt the talk was an opportunity to share with others the reason why they should do so.

Though they were telling the story of their particular marriage, Kim said their hope was that the pilgrims would not learn just about her or Drew or their daughter, but instead about “how God has worked in our lives.” She said she believes an important part of their story is how they both invited God into their lives before they met each other, which she thinks is “the most important step before you can fully embrace your vocation.”

Though the times they said “yes” to God did come with some sacrifices  such as Kim staying home to raise their daughter and moving to a less-expensive apartment  Kim said, “God has taught us that the more we give ourselves away in love, the more He fills us with His joy and His grace.”

Kelly Sankowski is a reporter for Catholic Standard, newspaper of the Archdiocese of Washington.