Other parishes in the county include: 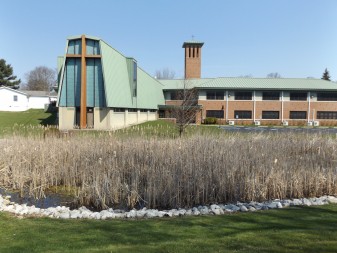 SYRACUSE — St. Martin de Porres Church in Syracuse was established Jan. 19, 1966, with Pastor Eugene Zimmerman its first pastor. He served the new parish for ten years. The church was dedicated on June 11, 1966 by former Bishop Leo A. Pursley.

Prior to building St. Martin’s Church, Syracuse residents for the most part attended St. Patrick in Ligonier or St. Francis Xavier in Pierceton. At first, Father Zimmerman served both St. Francis and St. Martin’s parishes. 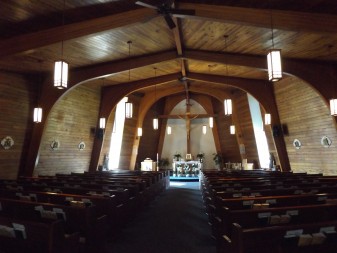 The interior of St. Martin de Porres Church in Syracuse in Kosciusko County was designed to look like a capsized boat. Looking up at the ceiling, the wood beams resemble the hull of an overturned boat.

Currently there are 300 families registered year round, but the number of parishioners attending Mass doubles in the summer as the Lake Wawasee area has many homes where people from other parts of Indiana, Illinois and Ohio come every year to spend their summers.

Father Richard Hire is pastor at St. Martin’s and he will have served the parish eight years this May.

“When I was a little kid my family came to the lake in the summers and there was no church then so we had to go all the way to Pierceton,” he said.

Father Hire said it’s nice that now the church has a religious education wing and room for hospitality. He said even though the “summer parishioners” don’t attend St. Martin’s all year, “They help support the parish very well,” he said, adding with their help the church was able to add air conditioning to the hall.

In 2006 a renovation project was completed which doubled the square footage on two levels as the expansion wrapped around the existing church. At that time they added the religious education wing to move the students out of the basement storage rooms they were meeting in. They also added an elevator so the elderly parishioners could attend events held downstairs. They also added a narthex as a gathering place and some additional parking spaces.

Ministries at St. Martin’s include Eucharistic ministry to the homebound, a regular food drive for the poor, religious education between Masses, a St. Vincent de Paul Society, adult education, Knights of Columbus and a choir. 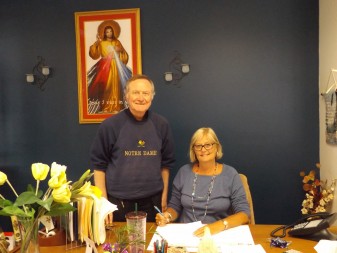 Administrative Associate Liz List said the adult education classes are currently offering the Symbolon program at three different times to accommodate parishioner’s schedules. They meet on Sundays after the 11 a.m. Mass, on Tuesday mornings at 10 a.m. and on Wednesday evenings after the 5:30 p.m. Mass.

The Knights of Columbus Council No. 6323 has its own reception hall at 414 S. Sycamore St. where Bingo is held every Saturday night.

There is currently no youth group at St. Martin’s — List led the group for over 12 years but when she stepped down there wasn’t anyone who wanted to take her place. But she said there are not a lot of youth in the parish at this time — there are mainly younger families or older adults, many of whom spend the winter in warmer climates.

Father Hire has many ties to the community — his family still has a condominium on the lake and he attended Our Lady of the Lakes Seminary on Lake Wawasee, which was run by the Crosier order from 1948-1970’s.