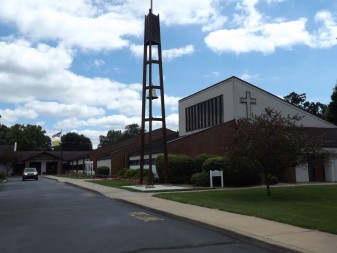 St. Mary of the Annunciation in Bristol. The bell in the bell tower is from the original church building. Annunciation Hall is to the left of the photo where many parish functions take place.

BRISTOL — Father Robert ‘Bob’ VanKempen, pastor of St. Mary of the Annunciation, Bristol, said he likes to plan things at the parish that people can be invited to — whether that’s the parish community or larger community.

Father VanKempen works with several different committees to plan and carry out such programs at the active Elkhart county church.

St. Mary’s was a mission church of St. John the Evangelist, Goshen. In 1971, Father Herman Miller of St. John’s purchased an old barn and plot of land with a house. The barn was renovated with the assistance of St. John’s parishioners and Mass was first said in the basement of the barn while the church was being built. Later, priests from St. Vincent’s tended to the Bristol parish until a priest could be found and appointed to St. Mary’s.

St. Mary’s will be celebrating its 75th anniversary in August. The cornerstone says 1942 but the parish was formed in 1941. The current church building was erected in 1978. Father VanKempen recalled a tidbit about church history from when the original church was no longer needed. He said the old church was built close to the front so the Bristol fire department was allowed to burn the building as a training practice. Luckily, before it was burned down, a parishioner found the old bell and some statues hidden in nooks of the building. 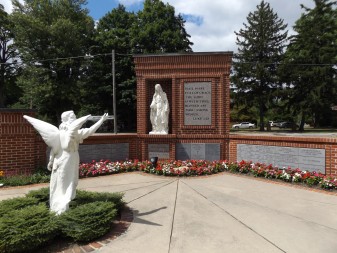 This Mary memorial garden at St. Mary’s in Bristol has a memorial wall with names of parishioner’s and family members. It’s a serene place to reflect and pray.

Last year they put up a new bell tower for the old bell and carillon from the original church and began ringing the bells on the hour from 9 a.m. to 9 p.m. When asked how the community reacted to the ringing of the bells, Father VanKempen admitted there were two complaints — that the bells weren’t loud enough.

“Everyone’s been very supportive; they love it and the sound carries across the river,” he said.

Father VanKempen, who has been at St. Mary’s for 12 years, said that the adoration chapel has been “very positive for the parish.” Some members of St. John the Evangelist church help to cover hours that the chapel is open — 1 p.m. Sunday through midnight on Thursday.

St. Mary’s is the only church in the county that doesn’t have a school so thirteen families in the parish attend schools at the other churches. An education center was built to hold CCD classes, Bible studies and other meetings. Father VanKempen said there are 300 children in the CCD program.

Currently St. Mary’s has about 750 registered families and are starting to draw more from the Hispanic community. The congregation is made up of people not only from Bristol, but also from Middlebury, Lagrange, South Bend and Lower Michigan — and even some families from Goshen and Elkhart. There are a lot of young families at St. Mary’s.

The parish lost their longtime parish secretary and bookkeeper and director of religious education Pat Cortas, when she passed away last year.

“She was the rock of the parish,” Father VanKempen said.

St. Mary’s is a very active parish and has several Bible studies, a book club, scripture study, a good choir, YDisciple for youth, Knights of Columbus and an Altar Rosary Society. 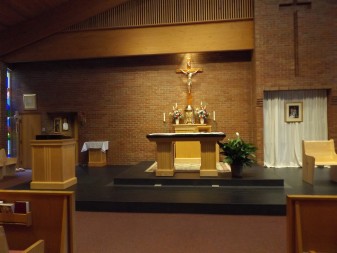 The altar at St. Mary of the Annunciation in Bristol. The altar furniture was recently changed and blessed by Bishop Kevin Rhoades in June.

The Altar Rosary Society hosts a rummage sale during Bristol’s summer festival and a holiday bazaar along with other churches in town. Their Winter Wonderland Bazaar has been popular.

Knights of Columbus host a pancake and sausage breakfast the first Sunday of every month and a blood drive in July and December.

Love and Blessings is a small gift store located in at St. Mary’s. It is open after Masses.

A Young Vincentions Group was started about a year ago for third-eighth grades. They meet the last Monday of the month, which is the day after the parish’s Food Sunday. So the children separate the food, divide it into boxes for those in the parish in need and the rest is taken to a local food bank. The children have a workday to make crafts for shut-ins and those in nursing homes.

St. Mary’s has a Spiritual Life Committee that helps plan programs to bring people together and develop their faith life.

“I heard if you want people to come, have food so we try to do that,” Father VanKempen said.

For this Year of Mercy they’re trying to plan programs around the works of mercy. They completed a DVD series on Mary and are starting the Bishop Robert Baron series. The programs are held on Sunday evenings and average about 20-30 attendees. A program on the Shroud of Turin was held and about 50 people attended.

“Every month we try to do something different to keep people engaged,” Father VanKempen said.

St. Mary’s will be celebrating its 75th anniversary this August and several days of special activities are planned.

“I really believe our Adoration Chapel has a lot to do with that; it’s helped us grow in faith.”

He said the priests in the county all work well together. Father VanKempen likes it at St. Mary’s and feels very blessed and believes the presence of the Adoration Chapel and prayers of the faithful is why St. Mary’s so special.

“I hope we continue to grow — not only in numbers but in faith — that people will reach out to others and it will help us all grow closer to Christ Jesus,” Father VanKempen said.