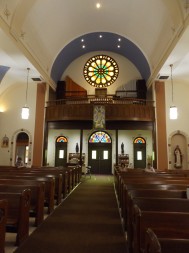 Immaculate Conception Church in Kendallville is right on the corner  at 319 E Diamond Street in Kendallville. The cornerstone displays the date this church was built in 1922.

KENDALLVILLE — A first look at Immaculate Conception Church in Kendallville gives the impression of its long and storied history. The brick church at 319 East Diamond Street was built in 1922, but the parish was established in 1867. Initially a mission church of St. Mary in Avilla, it was reportedly the oldest church in the area.

Current pastor Father James Stoyle said they didn’t have money to build a church at first so the old Baptist Church was purchased. That building was also once used as a school and a hospital, including a Civil War hospital. That church was later torn down and the lumber sold and the current church was built in 1922.

Father Stoyle said when Archbishop John Noll was pastor he made Immaculate Conception a mission church of St. Patrick in Ligonier.

The interior of the church is currently in great shape. Father Stoyle said it’s been renovated several times. Since he’s been pastor, new vents were put in the top of the church and the belfry was renovated to stop snow and rain from blowing inside. Interior walls had to be replaced from years of water getting inside and were repainted. Father Stoyle designed a new reredos (wall behind altar) from solid maple and it was installed just weeks before Easter. This also allowed the tabernacle to be raised higher, making it more visible from the pews.

At left, a view of Immaculate Conception Church from the altar, showing the choir loft and beautiful Rose stained glass window above.

The Stations of the Cross were also repainted. The basement was renovated and cement flooring had to be torn out, classrooms were renovated and the lighting in the church was tripled.

“We did it all without a special collection,” Father Stoyle said.

Father Stoyle has been at Immaculate Conception Church about 6 and a half years. He said when he came the organist was nearing 85 years old so Father Stoyle invested in a recordable organ.

“I’m hoping to leave a library of music,” he said. “This organ allows us to have music during every Mass.”

Currently there are 275 registered families at Immaculate Conception with about 75 Hispanic families. They added a Spanish Mass on Sundays at 4 p.m. with the assistance of two Spanish speaking priests.

Immaculate Conception has an RCIA program, children’s church on Sunday mornings, Knights of Columbus, Rosary Sodality, a small choir and an active youth group. Father Stoyle said new youth ministers Zac and Mackenzie Ritchie have really engaged the youth of the parish with fun and educational activities — a recent Scripture scavenger hunt is an example.

There are currently 62 children in Religious Education in grades Kindergarten through eighth grade. Eucharistic Adoration is held the first Wednesday of the month.

Vacation Bible School started at Immaculate Conception the year after Father Stoyle arrived and it is open to everyone — non-Catholic children as well. Father Stoyle said they place a large sign out front — which garnered thanks from the mayor of Kendallville — and they do attract several non-Catholic children. Father Stoyle said all the parents know that the children will be attending Mass at the end of the program and before they hold the final picnic. He said the year before last had 67 children participating — the largest number so far. 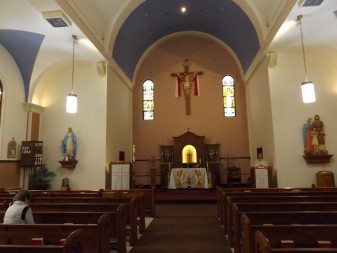 The sanctuary of the church shows the recent addition of the solid maple wood reredos. Parishioners of Immaculate Conception were praying the Rosary before Mass.

Vacation Bible School is just one way the pastor and parish has had the opportunity to evangelize. Father Stoyle has been invited to other churches to explain some of our Catholic beliefs. He said that’s historically been the case at Immaculate Conception as former Bishop John Noll used to host open houses “basically apologetics meetings” and a former pastor Father William Ehrman was also invited to dispel some Catholic “myths,” which resulted in the re-establishment of the parish in nearby Albion. Within the parish there are regular non-Catholic Mass attendees who come up for a blessing.

He has seen an increase in weddings, baptisms and RCIA attendance in the parish, too.

“People are seeking,” he said.

Father Stoyle said he believes one of the strengths of his parish is its generosity — in the church and beyond. He mentioned a local charity that all the churches support to assist their food pantry and when they receive thank you letters the generosity of the parish is often proclaimed. Parishioners also generously support foreign missions.

He enjoys the friendships he’s made in the parish and believes the parish is becoming closer and more unified.