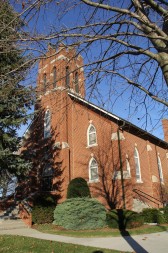 EGE — Immaculate Conception Church is the physical and spiritual heart of the tiny settlement of Ege in southeastern Noble County. On a clear autumn day its spire rises heavenward, calling the faithful to worship. Established in 1853, the parish has been a mainstay of Catholic life in the area for more than a century and a half and continues in that role today.

Longtime parishioners wouldn’t have it any other way. “It’s a part of my life,” says Jim Bianski, who lives in a large white house just a stone’s throw from the church. He and his wife Phyllis raised six children there and have always been active in church ministries. He continues as a member of the men’s Holy Name Society, one of the few such groups still active in today’s churches, he says. Their role at Immaculate Conception is simply “to do what needs to be done” for the parish.

The Bianskis’ daughter, Connie Dusek, would agree with her dad’s assessment. Not only does he do what is needed but “he does it with joy,” she adds. She and her husband moved “back home” from South Bend and currently live in her late grandmother’s home near the church. “It’s a cornerstone to my life” and has a real “sense of family,” she says.

Another long-standing ministry at Immaculate Conception is the ladies’ Rosary Society, which has many active members. And an annual chicken dinner that involves all parishioners is held on the Sunday after Labor Day. It is the largest fundraiser for the church and always draws 1,000 or more diners from the surrounding area. The traditional event dates back to the late 1920s when it was held in a wooded area near the church and even included the raffle of an automobile, says Bianski.

Immaculate Conception Parish currently serves about 150 families and is “unique in the sense that it’s growing,” according to Dusek. And many of those are young families with children.

Director of religious education Judy Egolf says there are 57 children in the preschool through eighth-grade religious education program who meet for class each Sunday morning after the 8:30 a.m. Mass. Eight children are in sacramental preparation for First Reconciliation and First Eucharist, while five others are studying for Confirmation.

Sixteen parishioners volunteer as teachers and high school students are very involved as well. Egolf herself began teaching classes as a high school senior and says she’s always impressed when high schoolers want to help with the religious formation of the younger children. Parish youngsters are also active in giving projects like the October Right to Life baby shower, the Thanksgiving food drive and CRS Operation Rice Bowl.

Egolf stresses that all ages are active in parish projects and ministries. “I love the warmth and unity of our small parish,” she adds.

Middle schoolers and high schoolers from both Immaculate Conception and sister parish St. John Bosco in nearby Churubusco are served by a youth group called United and Ignited in faith (U & I). Their leader Maria Fischer says, “Our goal is to grow closer to God, learn more about our faith all while helping and serving others in our community.” Some of the group’s activities include participation in the Relay for Life in Columbia City, support of Christmas families in need and performance of live Stations of the Cross at both churches.

The teens recently joined “Catholics on a Mission” area youth groups in a homeless outreach project in downtown Fort Wayne. Fischer says, “We share a smile, an ear, prayers and their special intentions …” as well as donating hygiene items and clothing to those in need. These youth exemplify the group’s motto, “for we walk by faith, not by sight.” (2 Cor 7)

Fischer echoes the words of others active in the parish community when she says, “We love the small-town feel and beauty of Immaculate Conception and its location.”

The music ministry at Immaculate Conception has long been handled by Beth Konger, wife of life-long parishioner Mike Konger and organist for 30 years. A nurse at Lutheran Hospital in Fort Wayne, she is only available to play for the Saturday evening and Sunday morning Masses, but she does so happily and without assistance.

She, too, appreciates that the parish is “still very much family oriented.” There are several generations of families and lots of young children at Mass. “It’s exciting,” she says. After Mass everyone stops to chat and catch up on the week’s activities while enjoying coffee and doughnuts. And they all pray for and look out for the needs of fellow parishioners. It’s another benefit of belonging to a smaller parish, she believes.

Parish administrator Father Danney Pinto came to Immaculate Conception Church, Ege, in 1995. He is not a diocesan priest, he points out, but is simply “on loan” from his home diocese in Sri Lanka. He stays busy pastoring at Ege and also at St. John Bosco Parish where he is in residence.

Father Pinto calls Immaculate Conception a “beautiful church,” and one well beloved by its people. “They hold on to tradition,” he says. Their sense of community and love for their church is evident in the active ministries of the parish and make it a vibrant and welcoming place of worship. 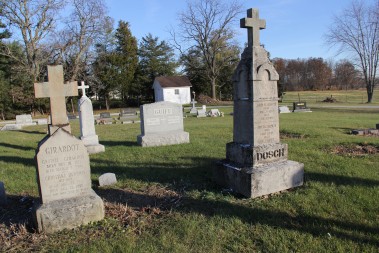 1853  Gabriel Girardot  emigrated from France and cleared land that he had purchased in Noble County, where Ege is now located. Within three years nine families lived in what was known as Girard settlement, where the first Mass was offered in Girardot’s home.

1863 Gabriel Girardot donated land for the first church, then personally built the structure and  handmade the pews, altar and other furnishings. The partially completed church was dedicated later that year by Bishop John Henry Luers, along with his Vicar General, Father Julian Benoit.

1876 A spacious frame church was built on a nearby site at a cost of $4,500 and the original structure was later moved there and converted to a rectory/convent/classroom. The school was named St. Anne School and the Sisters of St. Francis of the Sacred Heart began teachng there within three years.

1878 Father Francis Xavier Ege came to serve at the parish. He was so well loved and respected that the residents later decided to rename Girard settlement to Ege in his honor.

1883 The two-classroom school had 45 students taught by two nuns. It was supported by annual pew rent from the church of $210 and the annual per-pupil expense was $3.23.

1886 The parish suffered its first fire, which destroyed the original church. It was quickly replaced with a two-story brick school renamed Immaculate Conception School, with attached convent. A 10-room rectory was also built and still stands today.

1921 A second fire destroyed the church while Mass was being offered, but parishioners were able to save the statues, organ and some of the pews.

1923 A new church was built of the same size and appearance as the former one but with a lower level parish hall. It was dedicated by Bishop Herman Joseph Alerding on Nov. 14 of that year.

1932 The school was closed after 53 years of operation when enrollment dropped to 26 students.

1958 A new Catholic parish of St. John Bosco was established in nearby Churubusco, and the pastor, Father Anthony Rzeszutek, tended to both parishes while continuing to live at Ege.

1971 A new pastor at Immaculate Conception Parish , Father Dennis Blank, was ordered to take up permanent  residence  in Churubusco.

1979 A major renovation of the parish hall and kitchen area was done.

1981 The outdoor Marian Shrine was erected.

1987 The church’s interior was remodeled. A confessional room was restored and modified, and the oak chair rail, window sills, moldings, beams and columns for the main arch were added. The entire structure was rededicated by Bishop John M. D’Arcy.

1989 The parish had a third fire, caused by an electrical problem that burned the main altar and sanctuary floor but spared the church’s structure. Later that year, however, the restored altar and church were dedicated and consecrated by Bishop  D’Arcy.

1995 Father Danney Pinto was assigned to Ege from his home diocese in Sri Lanka as administrator of Immaculate Conception Church, and remains to this day.