He came all the way from Tinley Park, Illinois, a suburb of Chicago, on a journey that began two days earlier, winding through Wichita, Kansas, and heading north through Iowa to the Twin Cities — all because of a phone conversation with the parish business administrator at St. Michael, Dave Ferry.

Five years ago, Markham decided he wanted to attend Mass in all 50 states, plus the District of Columbia and Puerto Rico. After several years of waiting, dreaming and planning, he got going the weekend of June 5 and 6 when he visited two states on the East Coast, Connecticut and New Hampshire.

After coming back to his home in Tinley Park, he went to Wichita for a Mass June 12 and hopped in his car the next morning to drive to St. Michael. The day after Mass there, he went even farther north to visit Extreme Faith Camp near Pine River, about two hours north of the Twin Cities. The summer-camp ministry was founded 20 years ago by John O’Sullivan, youth director at St. Michael.

Markham’s taste of Minnesota will be highlighted in a book he plans to write after finishing all 52 visits, with the last one taking place in July 2022. The book will be called “52 Masses,” and will recount his visits not just to parishes but to ministries and organizations that intrigue him. 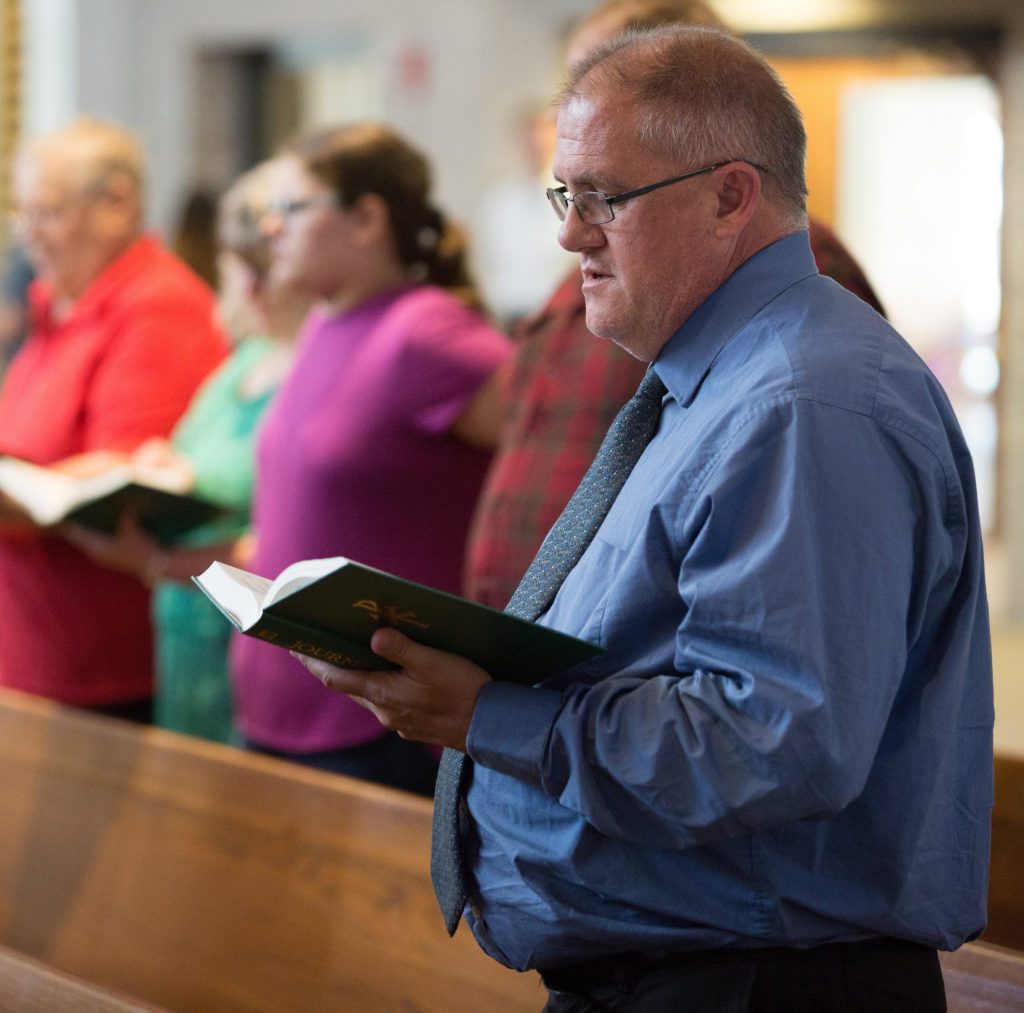 Daniel Markham prays during Mass at St. Michael Catholic Church in St. Michael, Minn., June 13, 2021. Markham is traveling around the U.S. on what he calls a “52 Masses” tour. (CNS photo/Dave Hrbacek, The Catholic Spirit)

In an interview with The Catholic Spirit, newspaper of the Archdiocese of St. Paul and Minneapolis, he said he hopes to finish the book, which will be published by Peregrino Press in Green Bay, Wisconsin, by the end of 2022.

In the case of St. Michael, Markham said he was lured by the parish’s vibrant youth ministry, both O’Sullivan’s regular outreach plus the camps that take place every summer. Recently, Extreme Faith Camp announced it was joining with Damascus Catholic Mission Campus in Ohio to become Catholic Youth Summer Camp.

St. Michael was one of several dozen parishes in Minnesota to respond to queries Markham sent in 2018 and 2019. At the beginning of the project, he looked up websites and contact information for parishes in each state, then sent emails asking for more information. A parish staff member at St. Michael read the email and directed him to Ferry, who talked about youth ministry at St. Michael.

“I actually got a lot of really nice responses from Minnesota,” said Markham, 54, who belongs to St. Gerald Parish in Oak Lawn, Illinois, with his wife, Kem. “One of the strongest responses of any state was from here. It was really neat.”

Currently, he has nearly half of his visits planned. He will finalize the rest between trips. His job as an editor of a trade magazine in the steel industry allows enough flexibility to accommodate his ambitious travel itinerary. In some cases, business and Mass trips coincide.

In addition to watching and documenting the ministry in action, which is based in Knoxville, Tennessee, and called St. Mary’s Legacy Clinic, Markham hopes to roll up his sleeves and help. He considers that an important part of the project, too.

“When I go there, I want to volunteer and help them, not just observe,” he said. “Wherever possible, I want to actually participate as much as I can.”

Most of the time, Markham will drive to his destination — in his wife’s 2014 Subaru — but will take the plane when necessary. In one instance, he not only will fly to the state, but keep on flying while there. That is causing more than a little apprehension.

One of the last trips will be to the Blackfoot Reservation in Montana, where he will attend a powwow that closes with a Mass. He will attend another outdoor Mass at Yellowstone National Park, which features regular Masses on weekends. These events are part of the diversity in the U.S. Catholic Church that he wants to feature in his book.

“There are so many wonderful things that take place on a daily basis in our Church,” he said. “That’s what I want to get across (in the book). That’s ultimately why I’m doing it.”

On the personal side, he added, “I want to come home a much better Catholic in every way possible.”

Hrbacek is a photographer/reporter at The Catholic Spirit, newspaper of the Archdiocese of St. Paul and Minneapolis.