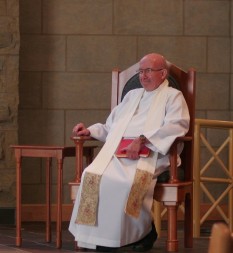 Bishop William McManus once met an old woman at the train station in downtown Fort Wayne. In their conversation, it quickly emerged that she was the mother of one of his priests: Father Larry Kramer.

“Kramer,” the bishop shook his head. “Sometimes I don’t know whether to suspend him or make him a monsignor.”

The comment captures much of the character of Father Larry Kramer, right down to its being uttered in a train station. His Amtrak adventures were a favorite hobby. In addition to being a lover of trains, Father Kramer embodied the wisdom of decades spent learning from and loving the people he served. That wisdom came with a heavy dose of impish humor that relished the surprises of the Holy Spirit.

Ordained on the eve of the Second Vatican Council, his priesthood was shaped by the reforms of a Church that “didn’t know how to move. We hadn’t moved in 400 years!” He stopped wearing the cassock following the observation of one inner city child to another: “Look! He’s wearing a dress!”

Amid the upheaval of the 1960s, he met Dorothy Day and Martin Luther King Jr., but didn’t trumpet those experiences. In his words, “I’m not in it for my own ego.” He later said that he thought it was a recipe for disaster for a priest to regard himself as some kind of intellectual. “I always saw myself as a missionary,” he said, “sent to evangelize this jungle of America.”

Perhaps Father Kramer’s greatest evangelical work was his pioneering role in campus ministry. Convinced that the Church needed to be present to college students, he pushed the issue as hard as he dared, quietly letting word get back to the chancery: “I am so set on this that I’m prepared to do something public in protest, and I don’t even know what that is yet.” The next round of priest assignments transferred him to Elkhart as an associate pastor, with the addendum “and campus ministry.”

Father Kramer’s ministry of presence on numerous campuses (he later asked Bishop McManus if he could be pastor at Our Lady of Good Hope, given its proximity to IPFW) laid the groundwork for what has become a major diocesan outreach. “I just kept the bench warm,” he later said of his contribution.

It also brought him into the orbit of students like me, whose first recollection is of that bald priest with the glasses often seen around Bishop Luers High School. We would later learn that his calm demeanor emanated from the serenity of someone who knew, “If the world’s problems have to be solved before I stop breathing, we’re in big trouble.”

Two of Father Kramer’s great perennial pieces of wisdom were the reassurance that “God grades on effort” and his knack for presenting Catholic teaching in creative ways that prompted people to rethink a Church they may have rushed to judge. The first piece gave a person hope to keep trying to do better, to realize that the Church walks with people in their struggles. The second piece we’d probably now call “Francis-can.”

It’s tempting to think of Moses looking down into the Promised Land at the thought of Father Larry dying not even a year into Pope Francis’ pontificate. But I’m sure he would scoff and probably laugh at the overwrought self-importance of that image. However, he didn’t shirk every comparison: “I can’t get over this pope’s behavior. Sometimes it feels like he’s me!” he shared over the summer.

With Jorge Bergoglio set loose on the entire Church, including Fort Wayne-South Bend, perhaps both God and Larry saw the redundancy.

“Why aren’t there more priests like you?” I asked him as a young reporter for the diocesan newspaper, struggling with what Pope Benedict would later call “questions of deep relevance for the life of faith.”

“Do you really think that’s a good idea?” was the incredulous reply.

Don Clemmer served as assistant editor of Today’s Catholic from 2005-2008. He is now assistant director of media relations for the U.S. Conference of Catholic Bishops.