Hurricane Harvey stranded Father David Bergeron in his pickup the night it ripped through Houston. The 38-year-old priest had been visiting his brother and had to pull over on an overpass three miles from his home in the flood-ravaged southeast side.

He couldn’t make it any farther or go back, so he curled up in his truck and tried to sleep as thunder and sirens alternated — rain pounding, wind howling, his beloved city churning in despair.

The next morning was eerily quiet. 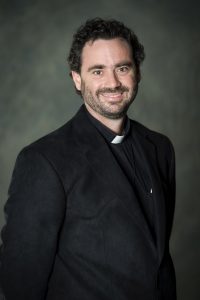 Father David’s kayak was in the back of the truck — he’d used it just the day before — and he felt compelled to venture out in search of wine so he could celebrate Mass with some families stranded in a nearby apartment building.

It made quite the sight: a red kayak slithering through the gray flood waters, a handsome man in a red baseball cap pulled over his dark, curly hair. There had been no sun for three days, and here was a smiling priest rowing down South Loop.

“It was a surprise to see a kayak in the street,” Father David told me. “It brought a smile to people — not only outwardly, but in their hearts as well.”

The closest gas station refused his request for wine; Texas law forbids the sale of liquor before noon on Sundays. The priest bought some food and headed back out. He spotted a man trying to cross a fast-moving current and escorted him.

Then came the newsman from ABC 13 reporting from the wet overpass. He squatted beside the kayak and held up a microphone.

Father David identified himself and chronicled his morning. The iPhone in his life vest began pinging. He knew what that meant.

Here was his chance.

Before long the interview wrapped, and Father David rowed off. He helped rescue a frail older priest from a hotel. He celebrated Mass. And he ministered to dozens of stranded Texans in his midst — greeting children, leading prayer and listening to their harrowing tales. He had just preached about Our Lady, Star of the Sea, an ancient title that resonated with him, and he found himself calling on the Blessed Mother as he waded through the waters, fearing snakes.

The story of the kayaking priest went viral, and Father David gave 17 interviews in the following 24 hours. The chapel at his residence, the Catholic Charismatic Center, which managed to avoid flooding, became his operating base. He rose early for a BBC interview, slipping out of the chapel to speak then returning to prayer.

The parallel was not lost on him, he told reporters: “The New World was evangelized through the waters, crossing from Europe to American and then using canoes.”

Father David is still busy helping victims of Harvey and reflecting on the experience.

“My greatest pulpit was the kayak,” he said. “Evangelization is just being present to the Lord — sometimes with words, sometimes with attitudes, wherever we are. You need to be who you are. For me, I am a priest who kayaks — and the Lord used that for his great purpose, something I could not have planned or staged.”

The key, he says, is to be attentive — rooted in prayer and open to others. “The Gospels were written 2,000 years ago, but they’re still being written by us today saying yes to the Lord as best as we can.”