WASHINGTON (CNS) — Yvonne Ambrose had one of the worst experiences any mother can suffer: Her daughter Desiree, age 16, was found in a garage on Christmas Eve 2016 murdered by a man who beat her, slashed her throat and left her to die, painfully alone, in the Chicago cold.

The internet was the key element that turned Desiree from a happy “A” student to a tragic victim of sexual violence.

First, she met a man in his early 20s on Facebook. He “groomed” her, a technique used by exploiters to earn trust to manipulate or control a potential victim of sex abuse.

Desiree ran away from home in late November that year.

Soon after, her new “boyfriend” sold her for $250 to a pimp who took photos of her, advertised her on Backpage.com — an internet platform that earned the vast majority of its multimillion revenue from ads selling human flesh until it was shut down by federal investigators eight months ago — and drove her to “dates,” where she was raped for money.

It was a sex buyer, Antonio Rosales, 32, who murdered Desiree.

According to the U.S. Centers for Disease Control and Prevention, child sexual abuse includes commercial sexual exploitation as well as using children in pornography and exposing them to pornographic material — whether or not there is physical contact.

In her new book “Invading the Darkness: Inside the Historic Fight Against Sex Trafficking in the United States,” former Congresswoman Linda Smith, R-Washington, describes how she first encountered girls and women kept as captives in brothels in Mumbai, India.

Touching the face of a child no older than 11, condemned to endless assault by men using her body, Smith committed herself to combating the phenomena of international sex trafficking. She started Shared Hope International in 2000 as a faith-based nongovernmental organization providing shelter and services for survivors abroad.

But “I was missing something essential,” she told Catholic News Service. “Something that made my blood run cold. The fact that child trafficking was happening in our own neighborhoods. I had a global view, not realizing this was a domestic issue too.” 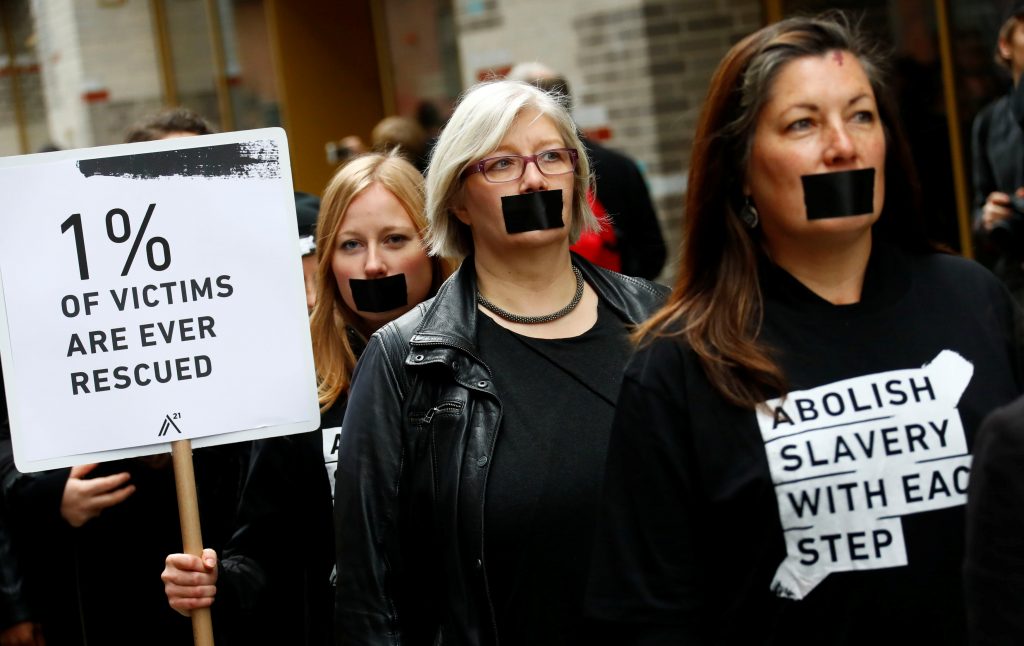 Activists take part in a “Walk for Freedom” in 2018 to protest against human trafficking in Berlin. The Frederick Douglass Trafficking Victims Prevention and Protection Reauthorization Act of 2018 recently passed by Congress and signed Jan. 8 by President Donald Trump allocates $430 million through 2022 to prevent and respond to human trafficking in the U.S. and abroad. (CNS photo/Fabrizio Bensch, Reuters)

Under U.S. federal law, any minor exploited in the commercial sex industry is a victim of human trafficking, but until about 10 years ago, especially at the state and local level, children who got caught up in prostitution were blamed for what happened to them.

“As a matter of routine, kids were being arrested, charged and convicted for prostitution,” recounted Smith, “They were called ‘bad kids,’ runaways, or worse. Yet, they were all victims.”

Shared Hope International did one of the first studies of Domestic Minor Sex Trafficking for the U.S. Department of Justice in 2006.

She continued, “Meanwhile, a man would go to an ATM, drive to a designated location to receive the product he bought and commit a premeditated crime — the rape of a child — but instead of being seen as a violent predator, he’s an anonymous ‘John.’ It’s the child who’s usually considered a criminal, while the ‘John’ goes home.”

In 2007, the Pontifical Council for the Pastoral Care of Migrants and Itinerant took a similar view about stronger laws directed at sex buyers, or “clients,” who the council said “need help in solving their most intimate problems and in finding suitable ways of directing their sexual tendencies.

“’Buying sex’ does not resolve the problems that arise primarily from frustration and lack of authentic relationships, and from the loneliness that characterizes so many situations in life today,” it said. “An effective measure toward cultural change with respect to prostitution could derive from associating criminal law with social condemnation.”

The Catholic Church designated Feb. 8 as an annual International Day of Prayer and Awareness Against Human Trafficking and invited people to host or attend a prayer service that fosters awareness of and support for victims of trafficking.

The annual day, created with Pope Francis’ encouragement in 2015, is the feast day of St. Josephine Bakhita, who was kidnapped as a child and sold into slavery in Sudan and Italy.

Covenant House, which shelters homeless youth in 14 states most ages 16-20, estimates that 20 percent of the young people it serves have been victims of human trafficking. On the streets, too often, they have sold, or bartered, access to their bodies in exchange for food, drugs, alcohol or a bed.

Ninety-five percent of all sex trafficking victims reported childhood experiences of abuse, according to a study commissioned by Covenant House from the University of Pennsylvania’s Field Center for Children’s Policy, Practice & Research.

“Traffickers can sense (past sexual abuse),” said Angela Aufdemberge, president of Vista Maria, a social services organization in Dearborn Heights, Michigan, told an anti-trafficking conference in Washington last May. “The biggest need is to address maltreatment in homes and regulating who our kids are communicating with on the internet.”

Ten months ago, President Donald Trump signed a new law making it illegal for online platforms to knowingly facilitate sex trafficking. It was a law Yvonne Ambrose had helped lobby for in Congress.

Standing next to him as he signed the measure in the Oval Office was a bittersweet experience for her.

Ambrose told the president: “Our fight against online sex trafficking has made a change — a change that will save the life of someone else’s daughter.”