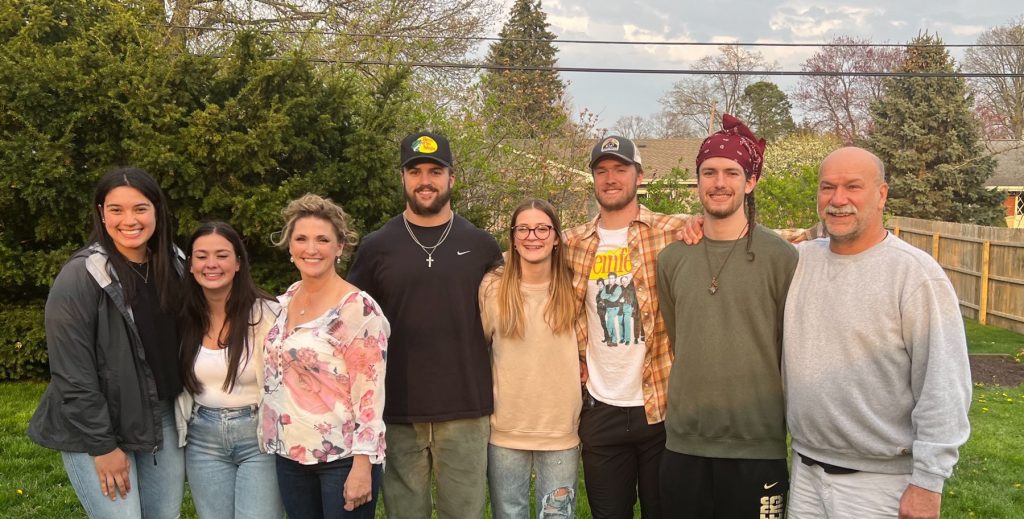 Photos provided by Brian Horvath
Zander Horvath (center, in black shirt) is surrounded by family and friends who gathered with him to watch the NFL Draft. Horvath was selected in the seventh round by the Los Angeles Chargers.

Zander Horvath is headed to the National Football League. And much like his entire football journey, his selection in the NFL Draft required a great deal of patience and perseverance.

The former Marian High School standout and Purdue University walk-on was selected by the Los Angeles Chargers in the seventh round of the 2022 NFL Draft on April 30. Out of 262 overall picks, Zander was number 260 – the third-to-last player selected in the draft. That amounted to plenty of anxiety- building among his family and friends who were gathered with him to watch the draft on TV.

Round after round passed by, minute after minute ticked off the clock. Zander, who was projected by his agent as a late-round selection or an early signee in free agency, kept checking his phone. He had already begun fielding calls from NFL teams discussing signing him as a free agent after the draft. His mother, Zita, recalled her thought process as she prepared herself for what seemed to be the inevitable.

“I thought, ‘Oh well, it’s ok. There’s a lot of people that get [signed in free agency], so he’s got other options. If not, he has a career in his life,’” said Zita.

That’s when Zander received a phone call from Los Angeles. He returned to the room moments later, just in time to see his name appear on the TV screen and pure pandemonium erupt around him. 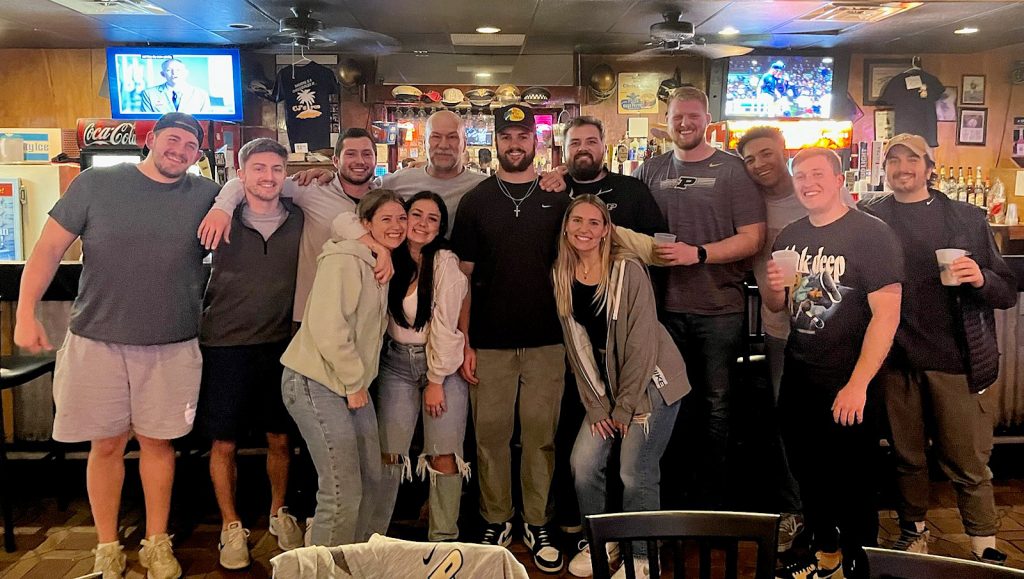 Photos provided by Brian Horvath
After getting drafted by the Los Angeles Chargers in the seventh round of the NFL Draft, Zander Horvath (center, in black shirt) and friends celebrated at CJ’s Pub in South Bend.

“Everybody was yelling and screaming,” said his father, Brian. “I couldn’t get to him. His coach was there, his buddies were there – everybody jumped on him.”

“It was really nice to hear his name,” said Zita. “Just some small guy from Mishawaka!”

Zander spent the rest of the night hanging out with the friends and family members he hadn’t been able to see for several months due to his training schedule. Almost all of them had watched and waited with Zander for nearly seven hours in order to see his NFL dreams become a reality.

“We had a good time,” said Brian. “It was long, but it was well worth the wait, believe me.”

Zander’s jump to the  NFL is an historic one on multiple levels. He’s the first Marian graduate to ever hear his name called in the NFL Draft, further adding to his record-setting high school career. Zander also became the first Purdue running back to be drafted in 24 years. And along with former Boilermaker teammates George Karlaftis and David Bell – who were selected in the first and third rounds, respectively – he’s part of Purdue’s largest draft class since 2008.

“It’s awesome,” Zander said of being drafted alongside Karlaftis and Bell. “I’ve been playing with them for the past few years now, and just to have my name recognized with them on the Purdue pages of getting drafted is awesome. Coming from walk-on to being drafted with guys like that is something I’ll never forget.”

In the end, the Chargers were the team that made the most sense all along. They were the one organization that flew Zander in for an official in-person visit, as opposed to a virtual call. From his discussions with the Los Angeles coaching staff, Zander said they can see him making an impact in multiple ways, thanks to his versatile skill set.

“Special teams is going to be the number one priority,” said Zander, who also earned his first playing time at Purdue on special teams. “I’m definitely a fullback, but hopefully I’ll get some routes out of the backfield in there too, and maybe potentially some runs, but I think it will be more of the hybrid back – blocking and catching passes.”

He’ll have plenty of talent around him with current Los Angeles players like running back Austin Ekeler, who tied for the league lead with 20 touchdowns a year ago, and Pro Bowl quarterback Justin Herbert. Zander’s parents both plan to attend a number of Zander’s games in 2022, as the Chargers are set to visit Indianapolis and Cleveland this fall.

But first, Zander must work to make the team’s final roster and earn a spot on the field – a challenge with which he’s all too familiar.

“That never ends,” Zander said of the work ahead. “I’ve done that multiple times, so it’s nothing new. I’ve just got to continue to keep that work ethic and routine that I’ve been having and carry it over when I get there.”