Deb Wagner uses an electric wheelchair, crutches and a walker. A member of St. Charles Borromeo Parish in Fort Wayne, she recalls how several times when she was younger, her physical restrictions made others feel uncomfortable.

“At that time people with disabilities were not thought of as contributing members of society,” she said. “Fear of the unknown is quite the catalyst for ignorance. I have always believed that the trials placed before me would enhance the relationship I have with God. While I believe I was called to religious life, God placed me in front of the communities and people he wanted for reasons I may never know. That’s okay, because I have faith that I was acting as God’s servant.

“Today, Mass is a deeply personal time for God and me,” she added. “Each time I humbly hope that it is one step closer to my eternal life with God.” 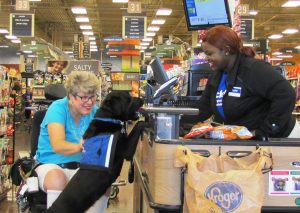 Deb Wagner pays for her groceries with the help of her assistance dog, Ellen, who stands on her hind legs and gives Kroger clerk Taylor Rozier a coin purse handed to her by Wagner. After Rozier takes the money, she puts the change in the purse and Ellen rises back up on her hind legs to gently take it and return it to Wagner. — Barb Sieminski

Wagner feels fortunate to have been gainfully employed all her life. She is a Commerce Center coordinator at Do it Best Corp. and has been with the company for 18 years this past April. After college, she worked as a drug-and-alcohol counselor for 18 months because the employer believed the coping skills for addition recovery were the same as coping with a disability. She also worked part-time as a counselor and part-time in sales and marketing.

“I really enjoy marketing, and my counselor intuition comes in handy almost daily,” said Wagner. She cited three thrilling moments in her life as her pilgrimage to the Holy Land, traveling alone to meet a pen pal who lives in Trinidad and a student hospital chaplaincy.

“The common thread I see in these three events was that circumstances put me together with people who were strangers in some sense, which required that I be vulnerable with and rely only on God to change me as he saw fit.” 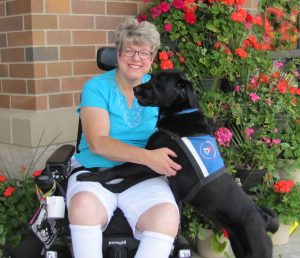 Some of Wagner’s milestone awards include Most Improved Athlete in girls track at Bishop Luers High School, where she participated in both shot put and discus from her wheelchair – a trend-setting move for IHSAA sports back then. She completed a Dale Carnegie course, served as Ms. Wheelchair Indiana (1990-91), and at the Ms. Wheelchair America pageant she won the National Achievement Award when she was voted Woman Most Likely to Succeed despite her disability.

She cannot recollect ever feeling anger toward God because of her disability. Neither can her parents, she said: In fact, they remembered quite the opposite.

“They said I was often criticized by authority figures as being too happy with my life,” said Wagner, who is a public speaker and freelance writer for Today’s Catholic. “I always seemed to have hope amid adversity and I believe that to be the key to survival and happiness.”

Wagner does not walk her path alone. She has two assistance dogs – Scarlet, a golden retriever who is retired and Ellen, a black Labrador retriever who is almost 3 years old and accompanies Wagner nearly everywhere in her blue “Working Service Dog” vest. At Mass, Wagner sits in her wheelchair at the end of a row while Ellen lies quietly in the pew.

At the grocery, when Wagner pays for her items, she hands Ellen her coin purse from her wheelchair. Ellen will rise up to the counter to pay the clerk, with the purse in her mouth. Then she will drop down to the floor until she sees the change purse being held over the counter again by the clerk, with Wagner’s change in it. She’ll rise up, gently take the purse in her mouth, drop back down and walk to Wagner, handing it to her. Ellen also responds to 30 other commands.

In her spare time, Wagner swims, reads, travels, creates crafts and wants to continue her five years of therapeutic riding lessons when she locates a barn closer to her home.

Finally, her secret to a joyful life, according to Wagner, is found in Philippians 4:13: “I can do all things through Christ, who gives me strength.”