Blessed Andre Bessette, a member of the Holy Cross Brothers and founder of St. Joseph's Oratory of Mount Royal in Montreal, is depicted in a painting at St. Patrick's Basilica in Montreal. Blessed Andre is known for his intense piety, miraculous cures and for his dedication to the building of the shrine honoring St. Joseph.

NOTRE DAME — Though he died more than 70 years ago, this continent’s newest saint, Holy Cross Brother André Bessette (1845-1937), of Canada will likely bring the world a new and sorely needed re-envisioning of God’s great love. André, say members of his Holy Cross family, spent his life deflecting praise and pointing to the loving mercy of the Good Lord.

The worldwide Congregation of Holy Cross is bursting with pride in Brother André and his ministry at St. Joseph’s Oratory in Montreal. The largely uneducated, always sickly, 5-foot-3-inch brother is the first canonized Holy Cross saint. The Congregation of Holy Cross, a religious order founded in the 1830s in France now has ministries — especially in education and parish ministry — in 16 countries on four continents.

In the Diocese of Fort Wayne-South Bend, the Holy Cross congregation is best known at its South Bend parishes and its institutions of higher learning — the University of Notre Dame, Holy Cross College and Saint Mary’s College. Brother André banners, pamphlets, statues, images and celebrations are currently found everywhere on Holy Cross terrain. And Holy Cross “family” members are thinking and talking about “their” saint.

Holy Cross Sister Maryanne O’Neill works with immigrants at the Brother Andre Outreach Center at St. Agnes Parish in Los Angeles. She was tickled to be going to the canonization and thinks she may be the only nun in her congregation who will have gone to both Brother André’s beatification in 1982 in Rome and his canonization.

Working with immigrants from many different backgrounds is a challenge, she said. They have so many needs — just like the people Brother André ministered to.

“Many people look at the big photo we have of Brother André at the center and ask me, ‘Do you know him?’” Sister Mary Ann laughed. “I tell them that I didn’t know him personally but that I know him in my heart.” She has her own idea about how Brother André might become a special saint, a spiritual hero for North Americans, especially for immigrants and those on the American fringes.

“A lot of people,” she pointed out, “think they have no worth. They think they can’t do anything worthwhile. He was a simple porter for 40 years but God did wonderful things through him. He is a marvelous model for people who feel that they have nothing to offer God or other people.”

Margaret Bouffard, a Notre Dame theology graduate student from Danbury, Conn., concurs. St. André has much to teach us. She planned to go to the canonization with her parents and with a group from Holy Cross Family Ministries in Easton, Mass. After she gets her master’s degree next spring, Margaret hopes to begin a career in campus ministry.

Though Brother André obviously never studied pastoral theology, Margaret says, “I can take lessons from his life. He certainly practiced the ministry of presence. He listened to people’s stories and always redirected praise back to God.”

The congregation of Holy Cross “feels great pride and happiness that our (Holy Cross) way of life can lead to sanctity,” added Father André Léveillé, a Holy Cross priest and chaplain for Holy Cross Village, a retirement community sponsored by the Holy Cross Brothers near Holy Cross College. Like Brother André, Father Léveillé is French-Canadian. He is also a longtime student of the new saint’s life.

Father Léveillé’s connection to Brother Andre dates to the day he was born in 1946 in Ottawa. His grandmother, he explained, suggested that his parents name him “André” after the Holy Cross brother whom Canadians had unofficially “canonized” at his death on Jan. 6, 1937. Over a million people came to Brother André’s funeral, Father Léveillé said. “In January! In Montreal!”

Father Léveillé admits that he hadn’t held on to the boyhood faith he’d had in Brother André as an instrument of God’s healing. “I believed it as a child,” he recalled,” but when you are a man and studying theology, you start to think: ‘Maybe this is superstition.’ That suspicion evaporated as he began to read everything he could find about the “Miracle Worker of Montreal.” He also began to spending time every Christmas at the huge shrine founded by Brother André.

“Every night I would go into the crypt church (of St. Joseph’s Oratory) and sit in the pew where he (Brother André) would sit. … One night, I saw this young man come in who obviously had cancer. You could see that all his hair was gone although the lights were turned low. He put his hands on the statue of Brother André and put his head down to pray. Then, he went over to the statue of St. Joseph and knelt down to pray.”

André Léveillé was deeply touched. “I thought, ‘They’re still coming to ask Brother André and St. Joseph to help them.’ Gradually, I came to the conclusion that something supernatural had happened in the ministry of Brother André. You can’t prove it but you just know something happened.” 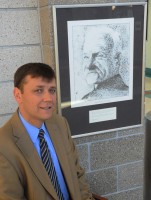 Robert Kloska, vice president for Mission Advancement at Holy Cross College, knows that Brother Andre’s example also led to a big change in life. Kloska and his wife will be in Rome for canonization ceremonies along with other representatives of Holy Cross institutions.
“I’ve had cancer three times,” he said, pointing to a slightly yellowed Today’s Catholic article about his struggle that’s pinned to the office wall at Holy Cross College. The article ran with a photo of a bald but smiling, hopeful Bob Kloska. “Seven and a-half years ago, I was diagnosed with Hodgkin ‘s disease which is a lymphoma.”

He went through brutal radiation and chemo treatments while many people (including his wife and five children) prayed for his healing, and especially for the intercession of Blessed Brother André.

Kloska, a South Bend native, said his awareness of Brother André’s story started during his student days in Holy Cross schools. “I can’t even remember how I came to have a devotion to Brother André.” What he does remember, however, is that he once assumed that he was in control of his life and future.

“I had more of a sense of my own accomplishments,” he explained. “I did all right in school and played on the golf team. With work … I was always able to do things.” Cancer and Brother André’s example provided a newer, truer perspective.

“When I got sick, it was all out of my control,” Kloska observed. “It’s when you’re totally helpless that God can really work through you.” Brother André was always deferring credit for accomplishments to God and to St. Joseph. “Before my illness, I wouldn’t have understood that as well.”