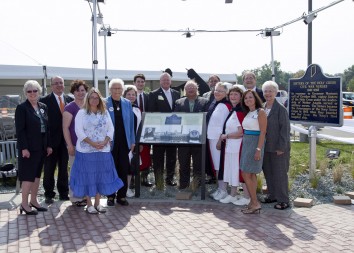 MISHAWAKA — Under a tent on the bright, sunny morning of Sept. 9, Saint Joseph Regional Medical Center relocated and rededicated the historical marker honoring the Sisters of the Holy Cross who took care of the sick and wounded during the Civil War. These sisters are considered the forerunners of the Navy Nurse Corps. The marker, originally located on Madison Street and Notre Dame Avenue near the former hospital building in South Bend was brought to its new location near the cross in front of the main entrance the new hospital on the Mishawaka campus.

Close to 150 Sisters of the Holy Cross, alumna of Saint Joseph-Holy Cross Nursing School, associates and others were present for the ceremony. Saint Joseph Regional Medical Center President and CEO, Albert Gutierrez, welcomed those present and stressed his obligation to protect the mission and values of the Sisters of the Holy Cross, who founded the hospital. Following his comments there was the presentation of an honor guard and the pledge of allegiance. The Loretto Choir from Saint Mary’s led those present in singing the national anthem.

Before giving the invocation, Holy Cross Sister Ruth Marie Nickerson gave some of the history of the congregation’s involvement in the Civil War. In 1861, six months after the outbreak of the Civil War, Indiana Gov. Oliver Morton asked the congregation to send sisters to Kentucky to care for wounded troops. Eventually 65 of the 160 Sisters of the Holy Cross in the United States, none of them trained, volunteered to serve in military hospitals, including the USS Red Rover, the first Navy hospital ship. The ship went up and down the Mississippi River, carrying the sick and wounded from both north and south to the various military hospitals.

“After returning from the Civil War,” said Rosalie Campanale, representative of Saint Joseph–Holy Cross Schools of Nursing, “the sisters recognized the need for hospitals and trained nurses. Thus our schools of nursing and many others were established throughout the country. This was the beginning of the long history of the congregation’s health-care ministry. Mount Carmel School of Nursing and Saint Mary’s College, Notre Dame, continue that nursing education tradition today.”

“In 1965, Sister John Francis Heleke, CSC, a faculty member at Holy Cross School of Nursing in South Bend, contacted Indiana Congressman John Brademas and asked for his help in having the Sisters of the Holy Cross commissioned as the first Navy nurses,” said Campanale. “On Oct. 31, the historical marker was dedicated and placed on the street near the then-Saint Joseph Hospital.”

Following these reflections was the unveiling of the historical marker that was then blessed by Missionaries of St. Paul Father Aloysius Ezenwata, supervisor of clinical pastoral education at the medical center.

At the conclusion of the program, many attended the noon Mass offered for the intentions of the Sisters of the Holy Cross in Our Lady of Fatima Chapel in the medical center.