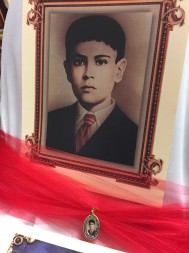 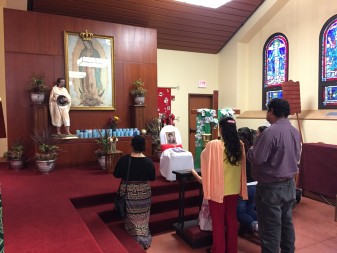 On Sunday, Oct.16, Pope Francis canonized seven new saints. One of them, St. José Sánchez del Río, was celebrated in a particular way in the Diocese of Fort Wayne-South Bend. Our Lady of Guadalupe Parish, Warsaw, hosted a remembrance of the 14-year-old Mexican boy who, in 1928, gave up his life for his faith.

St. José, or “Joselito” (Joey), was a heroically courageous young boy who embraced the consequences of his strong faith in the midst of a time of brutal Church repression in Mexico. He felt called to fight for the right to practice and profess Catholicism, even though Catholics were being actively persecuted in the 1920s by the Mexican government.

Originally from the state of Michoacán, he was in school when the fighting first began. St. José’s brothers joined the rebellion, but due to his age his family wanted him to stay home. He persisted, and they finally relented and gave permission for him to join the cause. Soon Joselito found himself on the front lines, as flag bearer for the “Cristero” fighters.

Eventually, he was captured by government troops and tortured in order to force him to renounce his faith. St. José could have chosen to preserve his life, but he refused. Just before he was shot he was heard to cry out, “Viva Cristo Rey!” or “Long Live Christ the King!” This is why St. José is often depicted holding a palm branch, a symbol of martyrdom or dying for one’s faith, as well as a bullet and trail of blood at his feet.

The timing of St. José Sánchez del Río’s canonization added importance to his example, as three Mexican priests were murdered in September after they spoke out about gang and drug trafficking violence.

St. José Sánchez del Río was executed during the Mexican Cristeros war of the 1920s for refusing to renounce his faith.

Because of St. José’s young age and inspiring witness, local Hispanic Catholics and Our Lady Of Guadalupe Parish organized an event through which the Spanish-speaking youth might remember him. Leo Patino, parish youth minister at Our Lady of Guadalupe, said: “This is a part of history that we, as Mexican Catholics, might have brushed off … We might have forgotten, even though it just happened in the last century.” He explained to youth group members how even though St. José was about their age, he is considered a martyr.

“This kid gave his life for his faith and to be able to practice it. Would you guys be able to do that?” he asked. He heard that many thought so, and impressed upon them that being a young Catholic is important.

Carlos Ortega, who teaches RCIA at St. John the Evangelist Parish, Goshen, brought his wife, granddaughter and whole RCIA group to the observance. He stated that St. José Sánchez del Río reminds us of the vital, basic importance of our belief in God and the faith that is at the heart of Catholic life. The details of the life of St. José, however, were new to him.

The events at Our Lady of Guadalupe Parish began with a brief history of the saint and of the canonization process. It included an explanation of a very special miracle, the second one attributed to the saint, of a 4-month baby girl who was about to die but was healed completely. The baby’s mother prayed especially to the then-Blessed José, asking for his intercession and saying, “You were a child. You would understand.” The medical evidence was so strong that the case was quickly approved.

Organizers also showed the movie “For Greater Glory,” which depicts the story of St. José and the Cristeros. After a question- and-answer period and a short break, the faithful gathered for an hour of Adoration before an exposed relic of St. José. Finally, the groups from South Bend, Elkhart and Goshen gathered with the Warsaw parish community for a 6 p.m. Mass that was offered for the youth of the diocese and for all families.

Enid Roman de Jesus, director of the diocesan Office of Hispanic Ministry, began: “We pray especially for families today, that they teach by word and action, teaching their young in the loving way, the way of Jesus.” She said later that she hopes to schedule a larger gathering with youth groups from across the diocese on Feb. 10, the occasion of St. José Sánchez del Río’s first feast day.