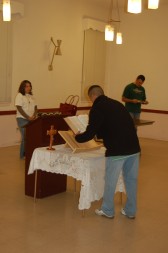 Becky and Pepe Ruvalcaba lead the opening prayer at the sixth and final meeting of Friday night Arise small faith communities at St. Adalbert Parish, South Bend, while Emanuel Alvarez places the Bible in a place of prominence.

SOUTH BEND — The Arise Together in Christ parish renewal process is reaching Hispanic Catholics who are both spiritually hungry and open to the Holy Spirit, say coordinators in the diocese’s Spanish-speaking parishes.

Earlier this year the Diocese of Fort Wayne-South Bend rolled out Arise, which encourages the faithful of all languages and heritages to come together and share their personal experiences in a faith-based architecture. Thousands responded, including large numbers from each parish that ministers to Spanish speaking individuals.

“We are very pleased that we got the participation we had hoped for,” Roman said. “You always hope that even more will come, that people who haven’t been involved in the past will continue to come in. But overall we’ve had a very good response. And we have a good group of facilitators leading them, which we hope is the new leadership of their parishes.”

Zulma Rodriguez, a parishioner at St. John the Evangelist Parish in Goshen, and Father Fernando Jimenez, associate pastor, said that the support they received made all the difference in Rodriguez’s success as a first-time ministry volunteer.

“That’s the beauty of it. Even if you think you don’t know how to be a minister, everything is right here,” Rodriguez said of her coordinator’s booklet. “We have fliers that explain everything. We have people to call for help if we have questions.”

“You’re going to share your own personal experience. And you know how when someone smiles at you or gives you an encouraging word, how it changes your day?” added Rodriguez. “That’s what happens here, and it makes people feel comfortable. It’s that personal experience that will lead people to evangelization.”

At St. Adalbert Parish in South Bend, Arise — or “Levántate: Unámanos en Cristo” as it’s known in Spanish, played right into the work that ministers were already doing.

“We were already gathering together — some for prayer, Christ Renews His Parish, las Guadalupanas (those with a special devotion to Our Lady of Guadalupe), marriage preparation and other programs and ministries, but this adds formation. And I love the structure of the book,” Jesusa Rivera, the coordinator of St. Adalbert’s Levántate program, said.

Implementation of Levántate was phenomenally successful at St. Adalbert, starting with the group of 40 or so ministers who were brought together in June for conversations and program training.

“It was extremely positive and energizing. This was a desire. They wanted to do this,” Rivera said. “We know that, at the end of the day, we want to be in a relationship with God. But what will that relationship look like? We started talking about that, and that’s the positive we saw in it — that it was taking us to the next level.”

Their excitement, in turn, has been rewarded by how much they wound up liking the Levántate process.

“I was at the oración (prayer) group the other night, and the people were saying, “We just want to keep going! We say that the 90 minutes are over, but they just stay afterward … it’s just been so positive.”

Before they met for the last session last week, each of the over 40 Levántate groups at the church had between seven and 15 members, which meant that between 300 and 400 parishioners were participating. Most of the groups were Spanish-speaking, although a couple of sessions were conducted English. Rivera is optimistic that even more people will respond to the second phase of the program early next year. “I think that if we speak about our good experience and engage people prior to then by giving testimony, they’ll respond.”

One thing that proved both helpful and inspirational was Holy Cross Father Peter Pacini’s involvment, Rivera continued. “He was at every one of our meetings. So it wasn’t just that the people were getting excited about it on their own. They were being led from the top down.”

At the end of each Arise/ Levántate lesson are suggestions for how to turn faith into action. Some of the Levántate groups at St. Adalbert decided to carry them out as a unit. One got together to pray for the sick and another collected canned goods and donated them to the St. Vincent de Paul food pantry.