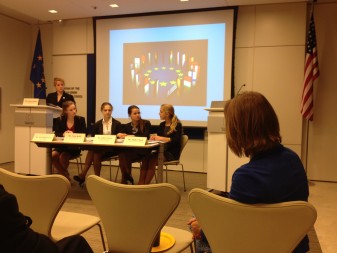 Pictured are members of the Saint Joseph High School Euro Challenge team giving their presentation to the Italian Embassy Delegation in Washington, D.C.

“Euro Challenge is a national economics competition focusing on the Euro and Eurozone (all countries currently on the Euro). It asks 10th and ninth graders to research, discuss and provide solutions for current economic problems. Students are allowed to choose their topic … we chose high unemployment in Italy. Teams of three to five members present their discussion before a panel of judges for 15 minutes with a 10-minute question and answer afterwards,” said Nora McGreevy about the competition in New York. “Our regionals were held at the Chicago Fed and nationals at the New York Fed.”

The team of seven sophomores came together through their interest in economics.

“Macro and micro economics have been my favorite and most interesting classes this year,” said Sophia Carozza. “Mrs. Chismar offered us the opportunity to go beyond the classroom with economics and I joined the team.”

The students had many memorable moments during their planning for the competitions and the actual trip to New York.

“One of the most memorable moments for me was in the business center of the hotel the night before our first competition. We were all exhausted and fried, but we learned a lot that night and it was hugely beneficial when it came time for the question and answer round of the competition,” said Molly Clark.

Nora Kelly said, “There were many wonderful moments in the whole ordeal, but my favorites were when we all bonded over a conversation or a joke. Once all seven of us ordered Shirley Temples in a restaurant after the awards ceremony, and there was a real sense of solidarity and friendship among us.”

Learning about the European economy has not only opened the minds of the students but also made a lasting impression.

“It has given me much knowledge about Europe, specifically Italy, while it also has given me a deep understanding of economics as well; not to mention it was an unbelievable time and bonding experience,” said Greenan Sullivan.

Nolan Liu said, “I’ve learned a lot about economics, its real-world applications and its role in the economies of other countries.”

“I loved this. I’m honestly entertaining the possibility of majoring in economics because of this and I still keep up on the Eurozone economy. Not to mention the fun and friendships I made that I will never lose,” said Vivian Crumlish.