Addressing human suffering around the world begins with awareness, followed by Christian action. Catholic Relief Services, the official international humanitarian agency of the Catholic community in the United States, puts boots on the ground to effect change in the places experiencing pervasive poverty, hunger and strife; a critical component of their support team is Catholic high school students in the Diocese of Fort Wayne-South Bend.

A new relationship between CRS and Catholic high schools across the U.S. promises to harness the commitment of like-minded advocates for social justice. The new CRS Clubs initiative is part of a national network of high school and university clubs and parish chapter communities that are working together to end global poverty and migration and mitigate the changing climate, carrying out the USCCB’s commitment to assist people who are poor and vulnerable around the world. That commitment is motivated by the Gospel of Jesus Christ to cherish, preserve and uphold the sacredness and dignity of all human life, to foster charity and justice, and to embody Catholic social and moral teaching. 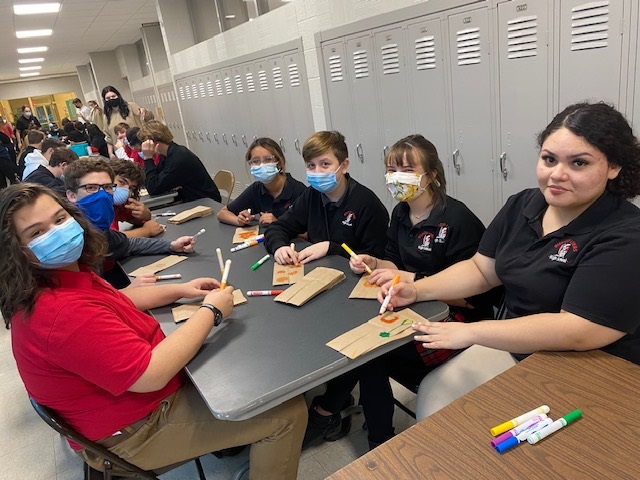 The organization’s work with Catholic communities is always evolving and responding to the signs of the times, said CRS Community Engagement Manager Beth Knobbe.  “As we transitioned to our new CRS Clubs, the most significant development was the integration of a stronger student leadership component.”

Within the clubs, high school students are the leaders and initiators. “Each club has clearly defined leadership roles, and we equip student to organize school-wide events that engage their peers in advocacy, prayer and community giving, said Knobbe. “Our hope is that these young leaders will work together to be change-makers today and grow their skills to be the influencers of positive change in the future. We are excited for them to be effective advocates and build their leadership skills to bring global solidarity to life in their school and beyond — and to do all of this in the context of our Catholic faith.” 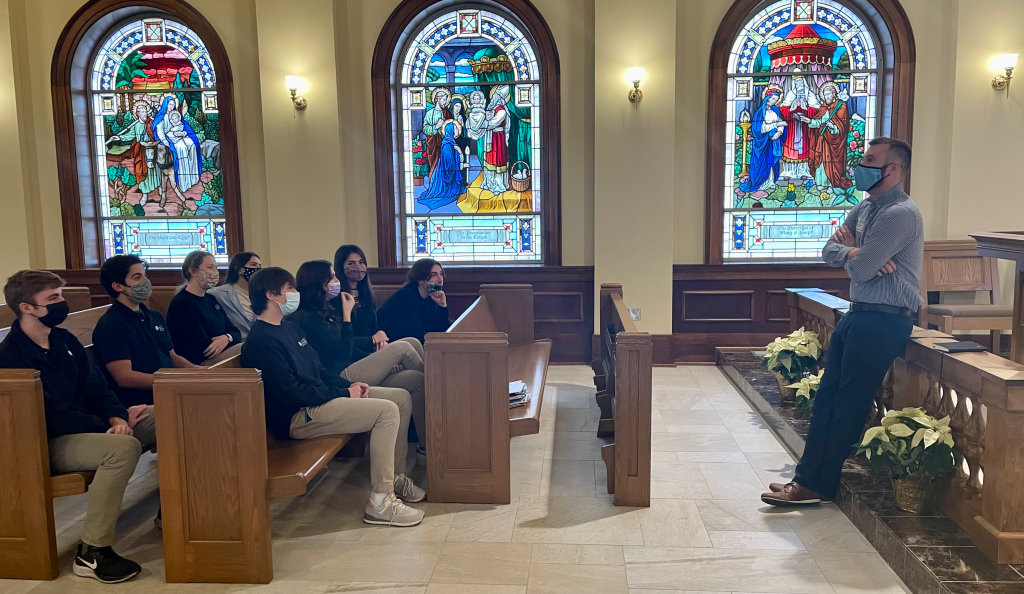 Photos provided by Abby Fink
Catholic Relief Services Club members at Saint Joseph High School, South Bend, learn about international global development from a guest speaker in December. Catholic high schools of the Diocese of Fort Wayne-South Bend continue to support the charitable work of CRS around the world and increase awareness — most through the establishment this year of CRS Clubs.

Fink and club co-presidents Lucia Williams and Felicity Nolan recall having heard Bishop Kevin C. Rhoades recount his experiences as a CRS board member during pastoral visits to the school. The two, and other members of the club, are now working on localizing the efforts of Catholic Relief Services in the South Bend community.

“We’re trying to fundraise and spread awareness, and offer prayers – because there’s only so much we can do to help from St. Joe, but we can all pray for everyone who’s affected by poverty and migration around the world,” said Williams. 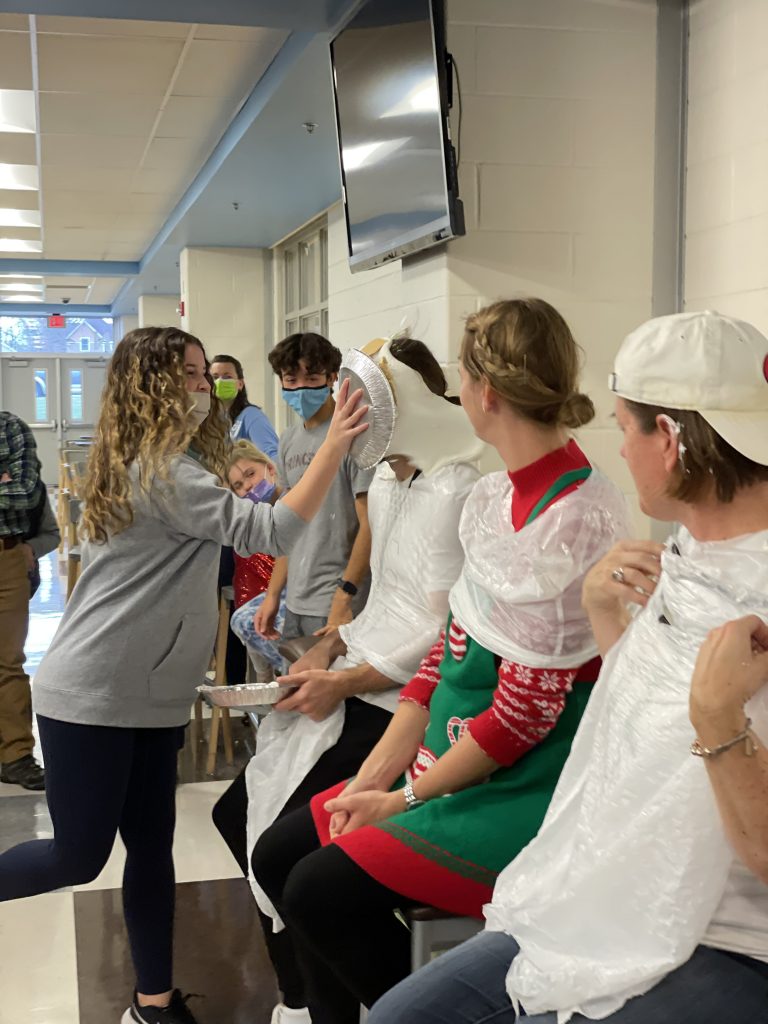 The club meets monthly to carry out the organization’s suggested action items. These usually consist of writing emails or letters to elected officials about different issues going on in the world or planning a fundraising event like the “12 Days of CRS,” which began Dec. 2 at SJHS.

“Every morning we’ve been having a school prayer dedicated to CRS, led by one of the club leaders, to help spread awareness. We pray for a different issue each day, like poverty, migration or humanitarian need,” explained Fink.

On Dec. 10, Fink’s husband spoke with the club about international development. A week later, Nolan and her father led a rosary in the school chapel for CRS efforts. That same Friday, a “Pie your teacher” fundraising event earned $1,758.90 for CRS from students who donated pennies to see their favorite teacher volunteer to take a pie to the face.

“It’s a good way to catch their attention for CRS,” said Williams.

The face of suffering in the world does grabs students’ attention, but they feel they can’t do anything about it, Fink noted. Williams feels that “through the CRS community, we can actually help meet a need.”

Like SJHS, Marian High School in Mishawaka shifted from a global CRS school model to a club-type organization in the fall. Club members lead the way in increasing awareness of the CRS mission and in fundraising and other activities to support the international organization, as well as in fighting for the rights and dignity of the poor in the U.S. and closer to home.

“A piece that wasn’t as big a thing under the global school, to my understanding, is the advocacy piece,” said advisor and first-year theology teacher Corinne DeLucenay. This fall they wrote letters to Congresswoman Jackie Walorski and Indiana Senator David Niezgodski about the pro-life federal Helms Amendment. Beforehand, they talked about how the U.S. should give aid to the poor without, for example, supporting contraception and abortion.

“How do we support the dignity of individual?” DeLucenay asked the students to consider.

During the next year DeLucenay hopes to grow the Marian club and install a leadership team, as well as equip the members to share the why and the how of what they’ve learned about advocacy with their peers. Her hope is that the students will increase in conscientiousness and capability to support their brothers and sisters in Christ who are in crisis both around the world and locally.

Bishop Dwenger High School in Fort Wayne is building its biweekly, before-school CRS Club on momentum from Students for International Topicality and Awareness, a social justice club started last year by two seniors. According to advisor Nick Miles, the now-graduated students were engaged in analyzing various world problems and trying to increase awareness of several of the same issues CRS addresses.

The CRS model will be more hands-on — involving not just research, as SITA did, but advocacy fundraising and volunteering, “to make us more aware of why we’re doing what we’re doing,” said Miles.

Although they’ve met only a few times, club members have already participated in the school’s Stuff the Bus project for the Fort Wayne Homeless shelter. Miles expects that by the time students return after Christmas break, the Bishop Dwenger CRS Club will be fully up and running.

The legacy of supporting CRS remains alive and well at Bishop Luers High School in Fort Wayne too. Instead of a club format, however, the school opted to engage students through service-oriented activities that incorporate CRS’ suggestions and focus. 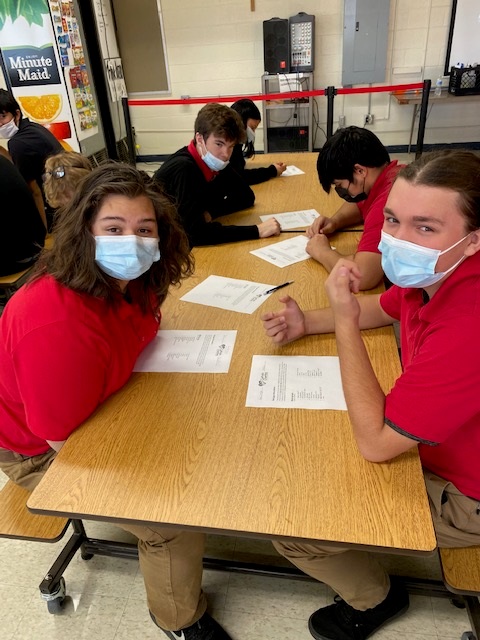 An in-class service project is carried out each week, and twice a year an all-school service project brings students together for a group project or to help in some way in the community. Last year the students underwent a refugee simulation offered by the organization to gain a perspective of what it is like to be a refugee; another group made sandwiches for a local homeless shelter. Others made rosaries, and yet others learned from representatives of Eagle Marsh how to conserve natural resources.

“It’s working pretty seamlessly because we already had a lot of the structure in place, said advisor Nicole Rudolph. “This is helping us be able to enrich our structure and bring it to a more Catholic and global point of view.”