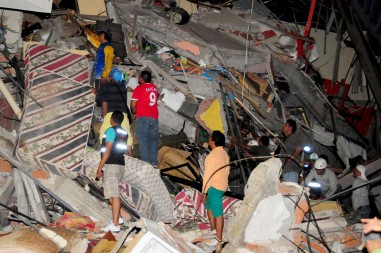 People search for victims in the rubble of a destroyed building in Manta, Ecuador, April 16 after an 7.8-magnitude earthquake struck the region. At least 400 people died, nearly were 3,000 injured and thousands were left homeless.

On April 16, a 7.8-magnitude earthquake hit Ecuador. One of the most powerful in Latin America over the last two decades, it is known to have killed over 400 people with the toll still rising.

Hundreds more have been injured, and there are reports of widespread damage to buildings, roads and other infrastructure. Communications are down or intermittent, further complicating damage assessment and need.

Given the widespread impact, Catholic Relief Services is coordinating with other humanitarian organizations and partners to determine priorities.

Water, food and emergency shelter will be the biggest needs in the coming days.

The people of Ecuador urgently need your help.

Mail your check or money order to:

WASHINGTON (CNS) — Six members of the Servant Sisters of the Home of the Mother, including a young nun from Northern Ireland, are among the dead in the strongest earthquake to strike Ecuador since 1979.

Sister Clare Theresa Crockett, 33, of Londonderry, died while leading children to safety in a school at Playa Prieta, where she was teaching the youngsters to play the guitar, according to the Spain-based order.

Her body was found under rubble April 18, about 36 hours after the magnitude 7.8 earthquake struck the Pacific Coast region of the country.

Five Ecuadorean postulants also died in the collapse. The order identified them by their first names: Jazmina, Maria Augusta, Maira, Valeria and Catalina.

The six women were among at least 400 people who died in the massive earthquake that struck communities in the northern part of the country. Authorities reported that nearly 3,000 people were injured and that an unknown number of buildings were destroyed or damaged.

Catholic Relief Services, the U.S. bishops’ relief and development agency, was partnering with local relief organizations to determine how best to respond in the communities most affected by the temblor. Water, food and emergency shelter are the biggest needs, the agency said on its website.

“Some of the poorest provinces are located near the coast and we expect thousands of people to need immediate help,” Tom Hollywood, CRS’s representative for South America said in a statement.

Some of the hardest-hit communities in the earthquake zone, including in Esmeraldas and Manabi provinces, were inundated with rain and flooding in the days before the disaster, making them prone to potential landslides and complicating the relief effort, the agency said.

“It’s been really difficult to get in touch with our local partners,” Hollywood said, explaining that communications networks are down or working intermittently. “Last night, even here in Quito, the whole network collapsed.”

Pope Francis sent words of condolence to Ecuador and Japan after praying the “Regina Coeli” with pilgrims gathered in St. Peter’s Square April 17.