As people grow older, many are faced with numerous physical, psychological and social role changes that challenge a sense of self and the capacity to live happily. Depression and loneliness are considered to be the major problems leading to impaired quality of life among the elderly.

In addition, despite advances in health care, many elderly people have chronic, incurable progressive diseases and need assistance with the activities of daily living. The greatest challenge facing many people as they age is the prevention of physical disability and the extension of “active life expectancy.”

Common conditions in older age include hearing loss, cataracts and refractive errors, back and neck pain and osteoarthritis, chronic obstructive pulmonary disease, diabetes, depression and dementia. As many age, they are more likely to experience several conditions at the same time.

In addition, with the COVID-19 pandemic completely upturning many aspects of “normal” life, an increased level of anxiety is to be expected, which also can be debilitating. How do people walk the line between being cautious and being unduly worried or obsessing over worst-case scenarios all the time?

The notion of positive spirituality can decrease some of the feelings of helplessness and loss of control that people experience with illness, as well as reduce stress and bring about increased feelings of purpose in life. Spiritual activities such as daily prayer, reading Scripture, attending Mass and devotions, frequenting the sacraments and serving the poor all can reduce feelings of isolation. And the community aspect surrounding spirituality can have positive outcomes for older adults.

Acknowledging spirituality is important because it may influence well-being in later life and allow aging adults to adjust accordingly with some aspects of growing older. Moreover, having a positive perspective, being able to cope, having active independence, meaningful relationships, freedom, having a relationship with God and a sense of spirituality are some of the aspects cited by older adults as contributing to ‘successful aging.’ Yet the extent of these opportunities and contributions depends heavily on one factor: health.

“We are a people who pray not only with our lips and our voices but also with our bodies,” said the late Father LeRoy Clementich, CSC, in his book titled: “Seasons of the Spirit.”

“Many people who join the community for Sunday liturgy come with special needs,” Father Clementich continues. “They come to pray and worship, but they need special and loving attention particularly in terms of access and physical space. The seating arrangements in our churches do not always adapt themselves well for those who are elderly and infirm, or for those who are physically or mentally disabled.

“As Christians, as God’s people, we ought to be able to say: ‘Come as you are. There is room for everyone,’” Father Clementich concludes.

Meet some elderly Catholics, many with infirmities, from throughout the Diocese of Fort Wayne-South Bend who try to participate in the Sacred Liturgy despite some limitations. 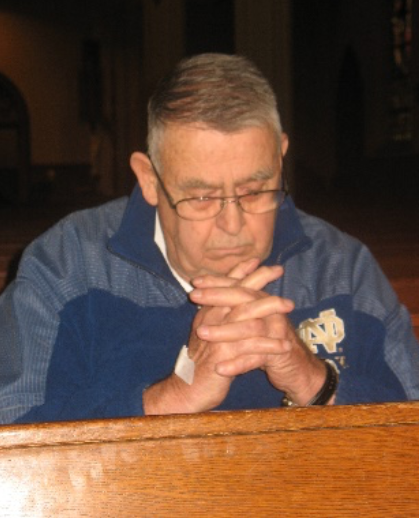 Mel Vachon thinks all the football he played at St. Andrew Elementary School and Central Catholic High School in Fort Wayne along with high and low hurdles competition probably contributed to the deterioration of his knees later in life. At age 62, in anticipation of retiring from SuperValu Inc. Food Marketing Division the next year, he had a double knee replacement. Five years later, one of those knees again had to be replaced. Now at age 79, he suffers pain and immobility in both knees. It slows him down but it doesn’t stop him from participating in daily Mass.

“I was blessed with the opportunity to attend Catholic schools and I’m grateful to the Lord that I can still do some things,” he remarked. Those “some things” include a variety of religious activities. In addition to attending the 12:05 p.m. daily Mass at the Cathedral of the Immaculate Conception in downtown Fort Wayne, he assists with leading the rosary and other prayers before Mass. He’s a proclaimer of the Word on Thursdays and serves at Mass on Fridays. If someone fails to show for either of those ministries, Vachon fills in. In fact, he has served Mass at the Cathedral since his grade school days. He also serves as a sacristan Monday through Friday and helps set up the proclaimer’s schedule.

On the first Tuesday of the month, he assists with the Little Flower Holy Hour at 7 p.m. in the St. Mother Theodore Guerin Chapel from September through June. And on First Fridays, Vachon can be found at St. Vincent de Paul Church where he lectors at the 11:30 a.m. Mass. He also assists Christine Bonahoom-Nix, administrative assistant in the Diocese of Fort Wayne-South Bend’s Vocation Office, with scheduling priests for the Mass celebrated for the intention of vocations to the religious life.

There is pain in standing and walking for the activities in which he’s involved, despite working out three times a week for two-and-a-half hours at Planet Fitness. “I’m also thankful I can still do some things with my wife, Gloria. But I would go to church no matter what,” he concluded. 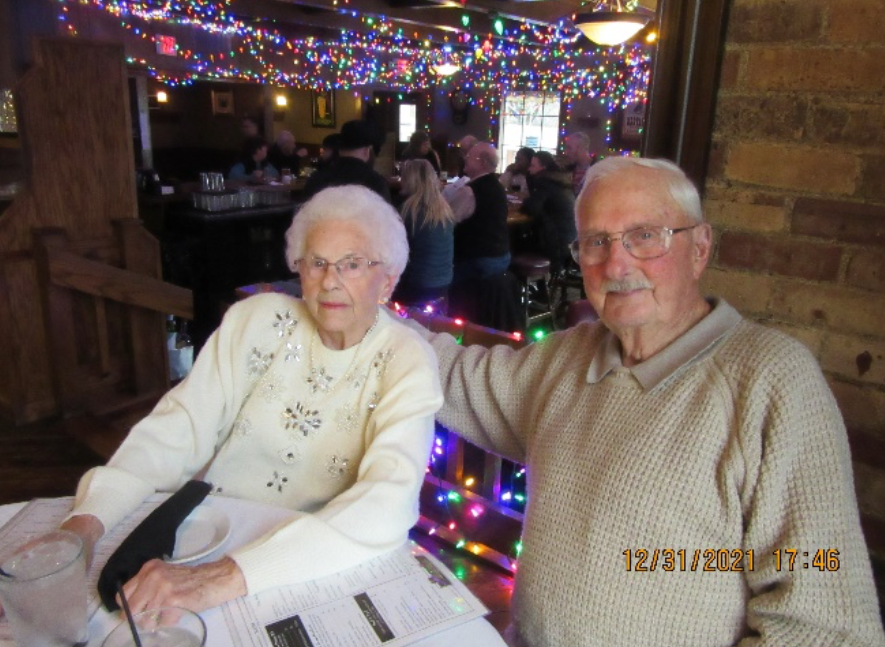 Lyle and Dorothy Freimuth will celebrate their 66th wedding anniversary on May 22. At age 88 and 85, respectively, they are beginning to experience the aches and pains of growing older. “We just can’t do what we used to,” they both indicated. Lyle had to give up golf and Dorothy can’t work in her large garden like she used to. She has pain in both knees and even though the doctors say she’s not ready for knee-replacement surgery quite yet, she’s fallen a couple of times when a knee gave out. Lyle has had cataract surgery, but still has trouble seeing at night from a deteriorating retina condition in his right eye. Both Lyle and Dorothy are diabetic.

The couple agree that, “Going to church is an important part of our lives.” They watched the Mass on television during the pandemic, but returned to attending in person at St. Therese Church, Fort Wayne, as soon as live Mass was made available again. However, the couple has had to give up ministries at St. Therese recently because, admittedly, it was just too much anymore. Both served in the St. Vincent de Paul Food Bank at the parish for about 23 years. Dorothy also ran and assisted in preparing funeral luncheons for more than 20 years. Lyle served on the parish council for four years as both a member and as president, and ministered as an usher for six years.

“We sit somewhat apart from each other when at Mass because we can’t use the same kneeler,” Lyle quipped. “Dorothy can’t kneel at all and I have to be careful not to put a kneeler down on her foot.”

For years Lyle has opened doors for Dorothy, but now he has to make sure there’s not a step up or down ahead of her. “I ask the Lord every day to guide us, guard us, love us and protect us,” he said. “And to strengthen our lives, heal Dorothy and comfort her.”