“Brothers and sisters, today is the harvest day of the Diocese of Fort Wayne-South Bend,” Bishop Rhoades said. “It shows the vitality of the Church in our diocese. This is the largest ordination class in our diocese since 1962.”

Bishop Rhoades opened the Mass of ordination by thanking the parents and families of the priestly candidates. He gave a special acknowledgement to the families of two deacons who were unable to attend due to international travel restrictions but were present via livestream. He addressed Deacon Degasperi’s family in Italian. His words to Deacon Onuoha’s family and friends in Nigeria were met with enthusiasm by the priests and friends from that nation in attendance, eliciting a boisterous response from the crowd and earning a broad smile from the deacon. Although their families could not be present, the two men received tremendous moral support from fellow classmates at their respective seminaries and the diocese in general.

In his homily, Bishop Rhoades noted that June 5 is the feast day of St. Boniface, traditionally known as “the Apostle of the Germans,” who serves as an example of a fruitful priesthood. He called upon the great saint’s intercession for those who were about to be ordained.

“Celebrating this ordination on the memorial of a priest and bishop who was tireless in his apostolic activity reminds us that, by its very nature, the priesthood has a missionary nature,” Bishop Rhoades stated. “By the laying on of hands and prayer of ordination, these young men are consecrated today to share in the mission entrusted by Christ to the apostles. They are anointed today to lead God’s people in love, to nourish them with His word, and to strengthen them with the sacraments.”

Speaking directly to the priestly candidates, he proclaimed, “My sons, you are consecrated in the truth today and sent by Jesus as His ambassadors in the world. You are to press forward in the world toward the city of God. As priests, you will do so by announcing the death and resurrection of the Lord in your preaching, celebrating the Paschal Mystery in the sacraments, and living this mystery by laying down your lives for God’s people.” 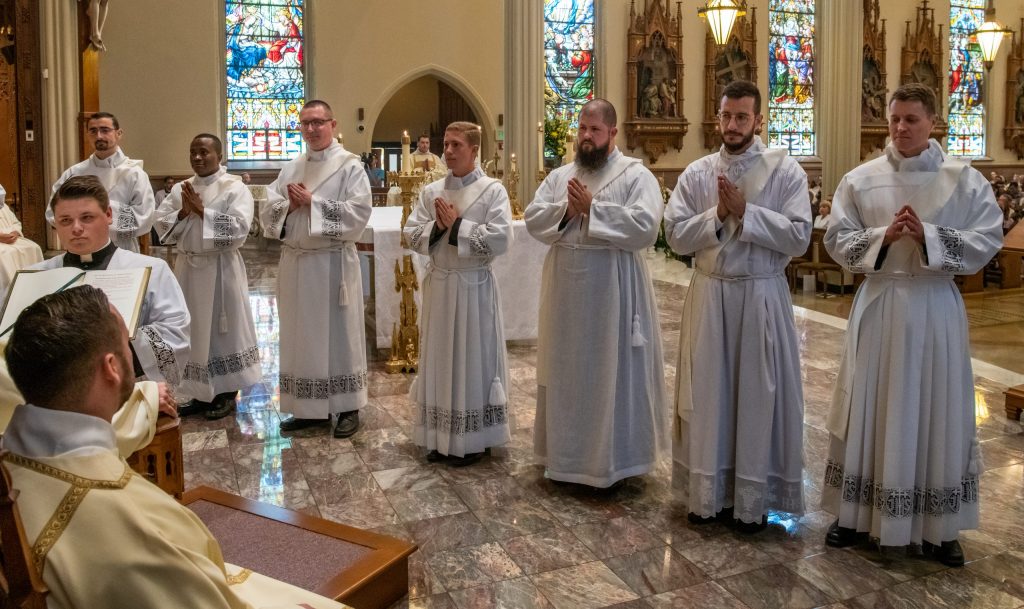 He further instructed them to “be intentional priests,” since “the Church needs resolute priests, priests who are intentional every day in their mission and purpose, like Jesus was resolute in His mission and purpose to do the will of the Father, to be the Good Shepherd of the people and to give His life for them. In our lives, such intentionality and resoluteness is not only inspirational to our people, it allows the Lord’s grace to cause our ministry to bear much good fruit.”

The candidates then came before the bishop to profess their obedience to him and his successors before prostrating themselves before the altar during the Litany of Supplication. When Bishop Rhoades laid his hands on each of them and said the prayer of ordination over them, the seven were officially consecrated into the priestly life. This was symbolized by the new priests exchanging their diaconal stoles for priestly chasubles, aided by a priest whom they had chosen to assist them.

As the hands of a priest bestow great blessings and will consecrate the Eucharist countless times throughout their priesthood, their hands were consecrated by the bishop with the oil of chrism and cleansed with a white cloth called the maniturgium, which the priest gives his mother at his first Mass. 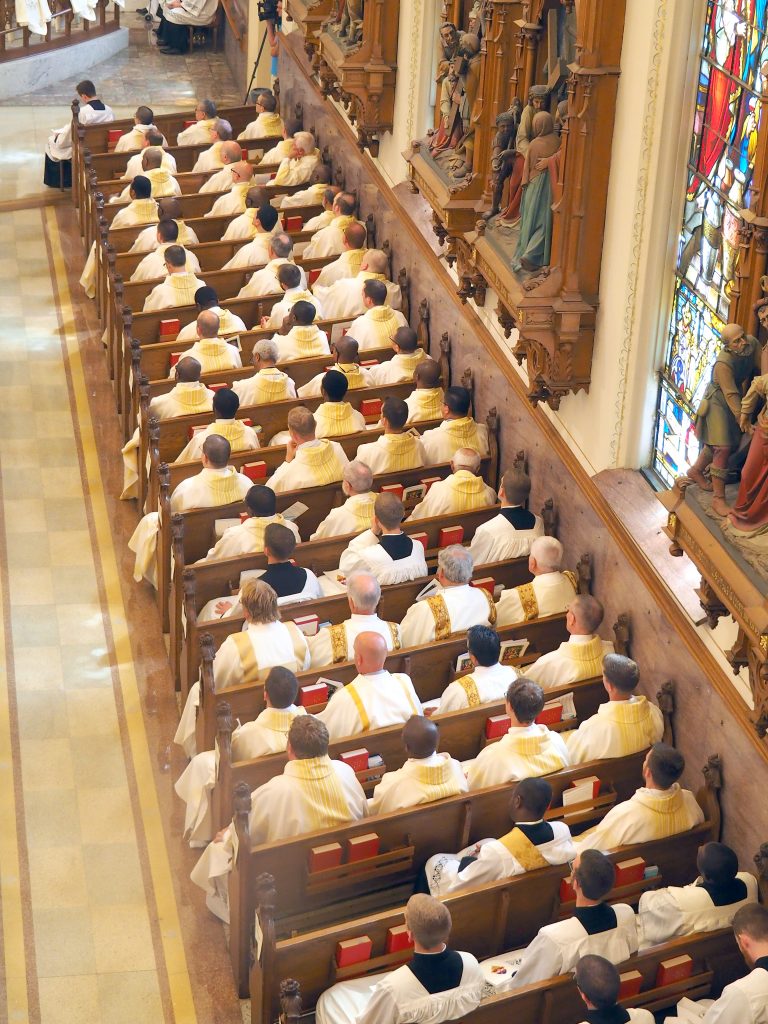 Priests, deacons and seminarians from within the diocese and those visiting from outside it fill the side pews of the Cathedral of the Immaculate Conception, Fort Wayne, to celebrate the ordination of the diocese’s newest priests on June 5. — Jennifer Barton

A sizable contingent of priests was present at this joyous celebration, and each of them participated in the laying of hands and the kiss of peace. By the end of the ceremony, the number of priests assembled, including the newly ordained, exceeded 100.

Six of the new priests completed their studies at Mount St. Mary’s in Emmitsburg, Maryland, and one finished his formation at Mount St. Mary’s Seminary of the West in Cincinnati, Ohio. Msgr. Michael Heintz and Msgr. Anthony Frontiero represented the seminary in Maryland, and rector Father Anthony Brausch represented the Ohio seminary, along with Father Andrew Moss, JCL, and Father Ryan Ruiz, SLD.

Post-ordination, Bishop Rhoades accepted the first blessing from the new priests, then each of them took their appointed spaces outside the cathedral to bestow blessings on all who came forward.

Though still somewhat awed by his new status as a priest, Father Ammer professed that he felt “pretty good” after ordination and is fully prepared to begin his new assignment at St. Jude in Fort Wayne. “I’m very excited; finally done with seminary and can get to work. I’m looking forward to that.”

To prepare for his big day, he spent the previous week with extra prayer time, speaking to other priests, and attending the ordination of a friend. “That really helped things get rolling,” he remarked.

For Father Lockwood, the reality of his new vocation “hit me during the ordination Mass when I got to go up to the altar and receive the host that I was consecrating up there with my brother priests. That’s when I would say that it really hit – going up there to receive Jesus for the very first time at the Mass that I got to celebrate.”

He expressed that he felt “enthusiastic and just total excitement, on cloud nine. So full of joy and so full of happiness that the smile hasn’t faded yet; it’s still there.”

His first assignment will be as parochial vicar of St. Therese and St. Henry parishes in Fort Wayne. “I’m looking forward to being there, because even though Father Matt (Coonan) will keep me busy, he’s a very, very solid priest and when I leave there, I will be very well-formed under his tutelage,” he stated.

According to Father Andrew Budzinski, director of vocations for the Diocese of Fort Wayne-South Bend, this year’s ordination class is the largest the diocese has seen in nearly 60 years, surpassing the group of five in 2018, though future graduating classes could see even greater numbers. During a time when many other dioceses have few seminarians, the large numbers of men seeking religious vocations in the Diocese of Fort Wayne-South Bend is greatly encouraging for the faithful.

“It’s wonderful. It’s a true joy,” Father Budzinski commented. “At the same time, it’s just as joyful when one man is ordained to the priesthood. I’m just so grateful to God for calling these men.”

While both he and the bishop are optimistic about the increasing number of young men discerning priesthood in the diocese, Father Budzinski is also realistic about the multitudes of young people leaving the Church at the same time. “But we already know how the story ends: Jesus wins. In the meantime, there’s a lot of work to be done.”

These seven new priests will almost certainly be a part of that work, difficult though it may be at times. “But it is also joyful and always good because it is God’s work. And God never fails.”

Video coverage of the ordination is available to view on the diocesan YouTube channel and Facebook page @diocesefwsb. To read Bishop Rhoades’ full homily, visit diocesefwsb.org/bishop