Father Jacob Meyer, pastor of St. Monica Parish in Mishawaka, has often described himself as a romantic. His great joy in witnessing young couples wedded in holy matrimony before the altar of God reveals the heart of a priest yearning to embody the Lord’s most intimate plea to the Father: “that they all may be one.”

While the last few months have brought separation and isolation for many, Father Meyer has sought creative ways to passionately engage and nurture his flock from a safe distance. While large gatherings were prohibited, access to the Blessed Sacrament remained “essential.” Although public Masses were halted in March, the doors to St. Monica remained unlocked each day from about 7 a.m. to 9 p.m., other than the times Mass was celebrated privately. Compensating for the loss of daily homilies, he offered many short Facebook videos to evangelize and encourage each domestic church watching from home. These included not only live Sunday Masses and Liturgy of the Hours broadcasts, but also Gospel reflections, homeschool activities, faith-based movie recommendations, inside looks at life in the rectory with the seminarians, and even some singing.

To continue communications from a distance, Father Meyer and his staff made calls to the sick and homebound and mailed several Easter postcards to every parish family so they could write to their loved ones and spread the joy of Christ’s resurrection, even from afar. 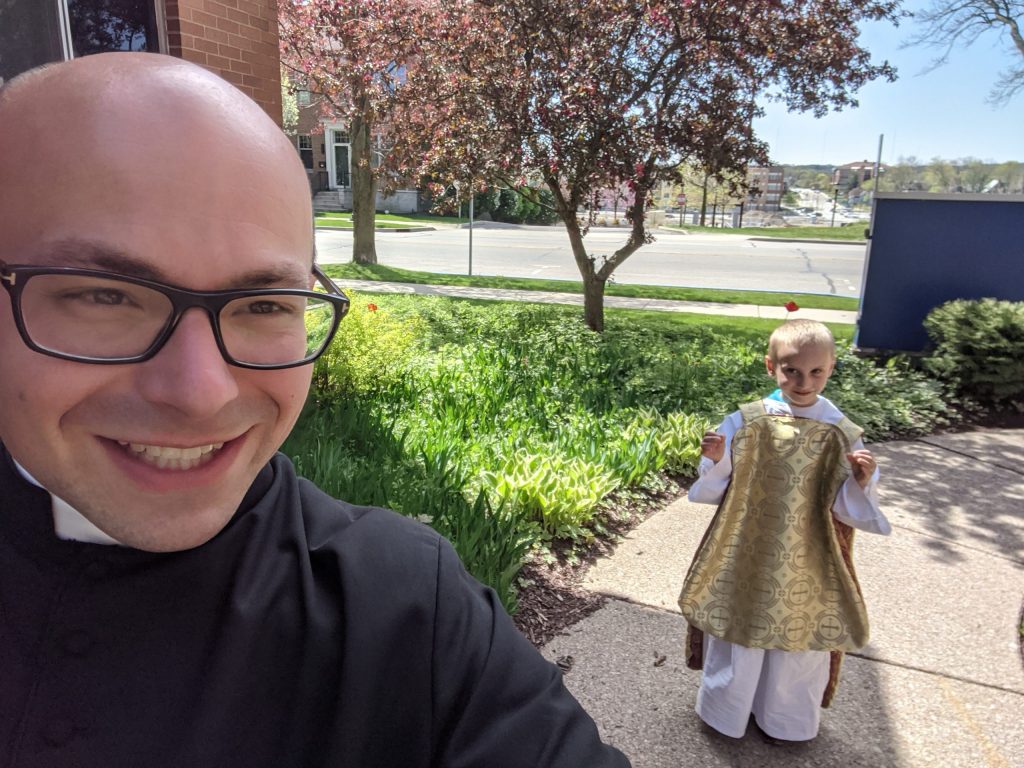 Father Jacob Meyer
Perhaps Inspired by a livestreamed homily on the importance of the priesthood, St. Monica parishioner Kolbe Dripps visits the Mishawaka parish to show his enthusiasm and support for pastor Father Jacob Meyer.

Perhaps the parish’s most significant demonstration of Christian unity during this time came through its Rite of Christian Initiation of Adults program. Since Father Meyer became pastor in 2016, St. Monica has expanded from 300 to 700 families, while also seeing a significant increase in weddings, adding more than 20 each year.

While not every wedding has included two Catholic spouses, many have been moved by God’s grace and Father Meyer’s hospitality, charisma and orthodoxy to pursue deeper marital  communion through full initiation in the sacramental life of the Church. This year, even amidst COVID-19 complications, 20 people went through RCIA at St. Monica Parish — most of whom received their sacraments at the vigil of Pentecost. Three people have been delayed because of the virus, but they plan to soon be on par with their sacramental classmates. These men and women faithfully stayed tuned in to Father Meyer’s weekly Zoom RCIA lessons throughout the quarantine, ensuring their commitment and preparation would come to fulfillment.

Jennifer Muniz is one of these individuals. Raised without a Christian upbringing, her first major introduction to the Catholic faith was through meeting the man who would later become her husband, Jorge. “He never put pressure on me to be Catholic, but when we decided to get married, we wanted to do it through the Church. Together we raised our two children in the faith. We belonged to different parishes over the years and the kids received their sacraments, but for me, church was about being together as a family, not necessarily related as strongly to my own faith.” 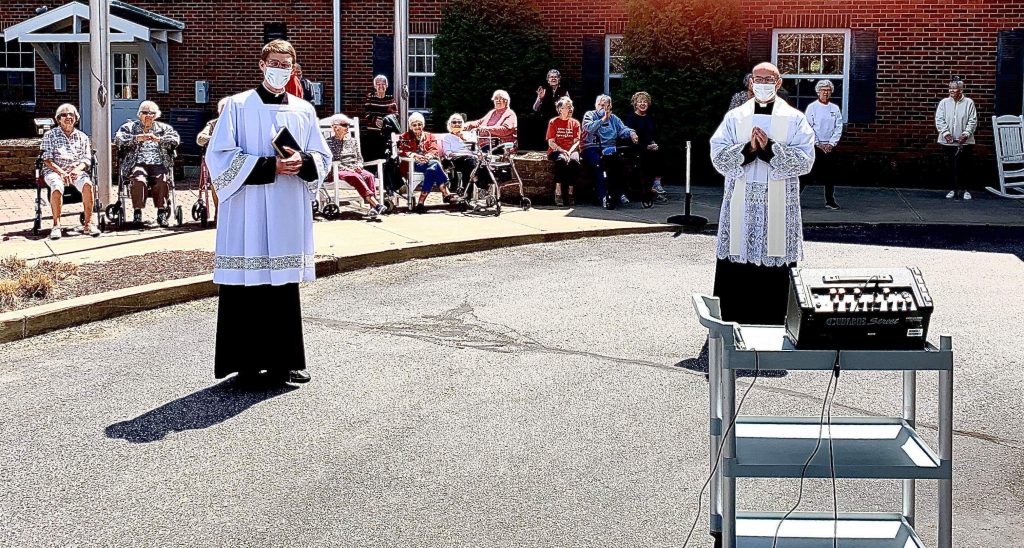 Tiffany Hudnall
Father Jacob Meyer, accompanied by seminarian Zane Langenbrunner, provides an outdoor blessing to the residents of The Hearth at Juday Creek, Granger, earlier this summer. To evangelize and encourage each domestic church and continue communications, clergy and staff like Father Meyer have made concerted efforts to reach out to those who might feel distanced by the COVID-19 pandemic.

She shared that this feeling started to change with Father Meyer when they joined St. Monica Parish in 2017. She remarked that Father Meyer “has an absolutely remarkable gift to connect with people, to connect us with ideas, and with one another. He is such a positive and inspirational person that I found myself very moved every Sunday. Then it was not so much about going to Mass simply to be together with my family, it became that I couldn’t imagine not going to Mass.” At this time, her children also switched from public school to attend Mishawaka Catholic. This led to “faith becoming more integrated in our lives and part of our daily outlook beyond simply attending Mass on Sunday. When my husband suggested the thought of converting because he saw how engaged I had become, I took the leap.”

Muniz shared that she appreciated Father Meyer’s open invitation to learn more about the faith without making a complete commitment from the start and was very grateful for his dedication and engagement throughout the changes brought on by the pandemic. The final confirmation for her journey came at this year’s Rite of Election. “It was our last public gathering before COVID hit and was an amazing witness to see so many people seeking the sacraments, especially from St. Monica’s.” Now as a fully initiated Catholic, having come into the Church on Pentecost, she shared her joy of being more deeply united with her family. “Jorge and the kids have been incredibly supportive — all of us are ‘all-in’ now.”

Justen Hug, a young adult who found his home in the Catholic Church through his girlfriend, Clare, also attributes a significant piece of his faith journey to Father Meyer. “I had grown up in a Protestant background and known Scripture, but Father Jacob framed Catholic history and truth in terms that I could resonate with. He also accompanied me in a way I had only ever experienced from Protestant pastors, for instance, inviting me for a one-on-one dinner to discuss any questions or objections.” After many months of RCIA, supported by Clare and the St. Monica community, Hug received first Communion and confirmation at the Pentecost vigil Mass. Two weeks later, he proposed to Clare. They now enthusiastically await their wedding at St. Monica. Father Meyer and their parish family look forward to it as well.