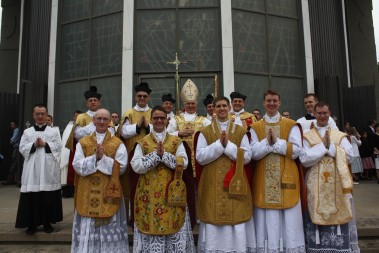 LINCOLN, Neb. — Gregory Eichman, a native of Fort Wayne, was one of five deacons of the Fraternity of St. Peter who was raised to the Sacred Priesthood of Christ by Bishop Fabian W. Bruskewitz, at the Cathedral of the Risen Christ in Lincoln, Neb., on Saturday, May 19.

“A priest is called upon not to preach his own ideas, or to speak on his own, or to gather around a circle of admirers, but his job is to proclaim the word of God,” Bishop Bruskewitz said in his homily at the Mass of Ordination. “He is not a spokesman, however, who simply mouths the words that are not his own. No, a priest must be so closely identified with Christ that the Lord’s teachings and values are his own.”

“So, in preparing homilies, teaching religious education classes, counseling people, and especially through the important book of his life, the priest must teach with the eloquence — even of a servant, sometimes without words,” Bishop Bruskewitz said. “He must not impose his own truth, but with humble certainty, he must proclaim the Truth of the One he has encountered, the One whose personality he has taken on: the Truth of Christ, who is inside of him and transformed by Him.”

Father Eichman always sensed he would be a priest since he was very young. He said it never left him. But it wasn’t until he began to attend the extraordinary form of the Roman Rite (Latin Mass) at Sacred Heart Parish, Fort Wayne, in the mid 1990s that it became clear to him that he wanted to be a Fraternity Priest.

He began at Our Lady of Guadalupe Seminary in Denton, Neb., in 2005 and completed his studies this year. During this period of instruction, he was given a deeper understanding of what God was calling him to do. It was not a particular moment or a time, but a gradual unfolding over the years of formation. This continual “humbling” experience, Father Eichman acknowledged, demanded submitting his sense to holy faith and trust in the will of God for him.

At seminary, Father Josef Bisig, who Father Eichman called a holy, humble priest, provided Father Eichman with an example of a good priest whom he would like to emulate in his priestly life. As the seminary rector, Father Bisig would give Friday night conferences that would offer good, practical advice to the seminarians. Before seminary, he acknowledges Father George Gabet, a priest of the Fraternity of St. Peter and pastor of Sacred Heart Parish, Fort Wayne, and diocesan priests Father Daniel Leeuw and Father Adam Schmitt as the priestly benefactors of his vocation.

At the ordination Mass Father Gabet was able to personally witness the fruition of Father Eichman’s vocation. Father John Shannon, another Fraternity vocation from Sacred Heart Parish, also assisted at the Mass.

Father Eichman’s parents, Joan and Brian, participated in the joyfully-anticipated day along with nine of 10 siblings — Juliana, Monica, Nicholas, James, Christopher, Bridget, Rita and Philip. Marie Elena Rose, another of Father Eichman’s sisters, was also there with her husband, Jonathan, and their three sons (Father’s nephews) Mark, Luke and Daniel.

“In recent years I have come to love the reverence and consistency of the extraordinary form which facilitates a focus on God without the distractions of the laity in the sanctuary,” Father Eichman’s brother-in-law, Jonathan Rose, said. “I’m thankful to Father Eichman for dedicating his life to this … tradition.”

“It was really humbling to have so many people come to the ordination,” Father Eichman said.

Philip Baumle, a parishioner of Sacred Heart and a friend of Father Eichman’s, said, “It was no surprise to see Father Eichman reach that day of fulfillment of his Holy Orders. To those who know him they can vouch that he possesses the talents and gifts to be a Christ-like example and faithful servant of the Church. I think God holds many good things in store for him in his Priesthood. It has been a real joy and blessing from God to be present for his Ordination and first Mass.”

“Attending my nephew’s ordination is one of the most wonderful things I have done in my life,” said Cinda Metzger, Father Eichman’s aunt. “Witnessing his parents’ pride and joy, attending his First Solemn Mass, and receiving a First Blessing evoked much more emotion than I anticipated, including tears of joy and an overwhelming feeling of God’s presence. I am so proud of Father Eichman,” said Metzger.

Father Eichman’s sibling, Sister Catherine of Christ, was also notably missing from the Ordination Mass. Sister Catherine recently joined the Discalced Carmelites at the Carmel of Jesus, Mary and Joseph in Valparaiso, Neb. However, the sorrow of her absence slipped away and was replaced with great joy the following day as the pilgrims from the east found this lovely, remote place of prayer — the Carmel — where Father offered his First Solemn High Mass on Sunday morning.

“It was an exceptionally emotional experience for me when Father Eichman elevated the host,” Susan Landrigan, Father Eichman’s maternal grandmother, avowed.  Father Eichman believed that offering his First Mass at the Carmel with Sister Catherine present, “made it perfect — I couldn’t have asked for anything more! Unbelievable.”

Father Gabet said, “… Father Eichman offered his first Solemn High Mass flawlessly at the Carmel of Jesus, Mary and Joseph with the Carmelite nuns singing the glorious Gregorian chant throughout the Mass. Among those cloistered nuns, whom no one could see but whose chant filled the air like voices of angels, was none other but Father’s biological sister Catherine Eichman.”

“What a glorious month this has been,” Father Gabet added. “It has certainly been a taste of heaven. We are very proud of Father Gregory Eichman. The fact that such a bright and talented young man is so willing to give himself completely to Christ shows that the power of our Catholic faith and the workings of the Holy Spirit are still alive and strong today within our parish and our diocese.”

Father Eichman has been assigned to St. Anne Parish in San Diego, Calif., where he will begin his priestly duties for the Priestly Fraternity of St. Peter.