The following is the homily delivered by Bishop Kevin C. Rhoades on Dec. 24 at Christmas Mass during the Night, at the Cathedral of the Immaculate Conception, Fort Wayne:

Two hundred years ago tonight, at Christmas midnight Mass at St. Nicholas Church in the village of Oberndorf in the Austrian empire, the hymn “Silent Night” was sung for the first time. A priest named Father Joseph Mohr wrote the words as a poem two years earlier. For midnight Mass in 1818, he asked the church’s organist and choir director, named Franz Gruber, to compose the music. That night, Father Mohr sang tenor and Gruber sang bass. In a time of turmoil due to war and unrest in Europe, they sang the words that promised peace and salvation. “Silent Night” has become the most famous and universal Christmas carol, a hymn that moves our hearts and expresses our hope in God’s promise of peace and salvation through His Son, the “holy infant so tender and mild.”

In the second verse of “Silent Night,” we sing that on that holy night “shepherds quake at the sight” and “heavenly hosts sing Alleluia.” We just heard in the Gospel about the humble shepherds receiving the good news of great joy that “Christ the Savior is born.” The heavenly hosts indeed sang “Alleluia,” a word which means “Praise God.” It is an expression of worship and rejoicing. The Gospel says that “the multitude of the heavenly host” praised God in these words: “Glory to God in the highest and on earth peace to those on whom His favor rests.” 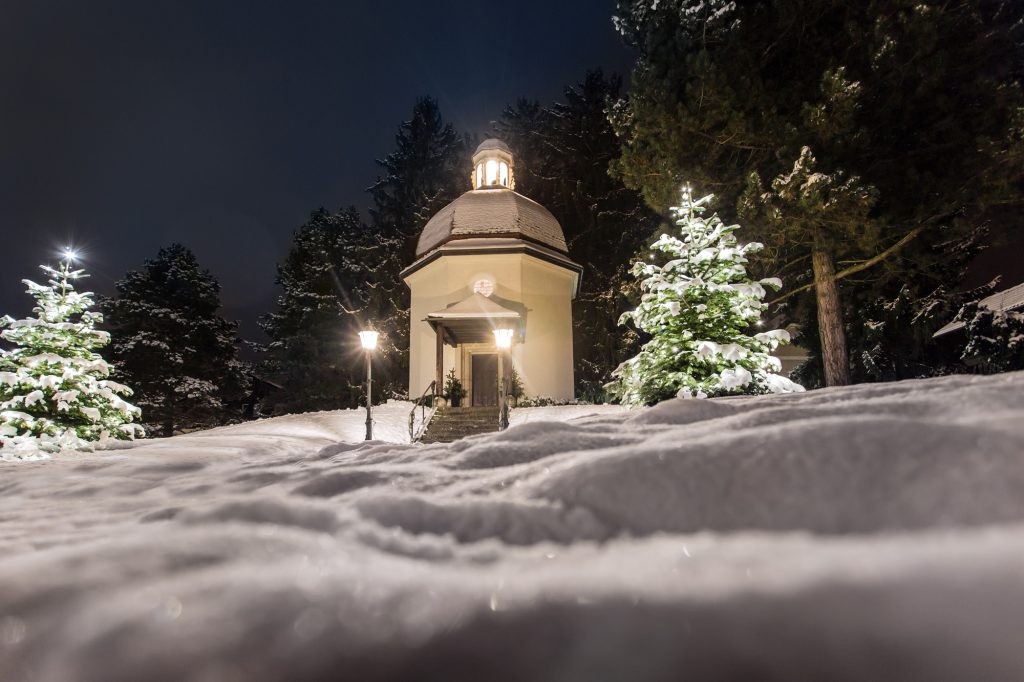 The Silent Night Chapel, which is in the town of Oberndorf in the Austrian state of Salzburg, is a monument to the Christmas carol “Silent Night.” The chapel stands on the site of the former St. Nicholas Church, where on Christmas Eve in 1818 the carol was performed for the first time. (CNS photo/courtesy www.stillenacht.com) S

On this bicentennial of “Silent Night,” I’d like to reflect with you on the song of the multitude of the angels. “Glory to God in the highest,” they sang. We are here at Mass tonight to praise God and to give glory to Him. God is glorious. God is indestructible truth and eternal beauty. His glory became visible in “the infant wrapped in swaddling clothes and lying in a manger.” When we gaze at the infant Jesus in the manger, we see God’s truth, goodness and love. This is God’s glory, and it is real. The Son of God became a tiny infant. The Word became flesh in order to set us free, to give us His grace and salvation.

The multitude of angels not only sang “Glory to God in the highest,” they also sang “and on earth peace to those on whom His favor rests,” or as the translation we use in the Gloria at Mass says: “to people of good will.” Born in the poverty of the manger, Jesus came to offer to all “that peace which alone can fulfill the expectations of the human soul” (Pope Benedict XVI).

One of the names of the Messiah prophesied by Isaiah is “Prince of Peace.” Jesus is the Prince of Peace who gives the peace that the world cannot give. His peace is redemption, liberation and salvation. No matter what happens in our lives, whatever trials and sufferings we encounter, the Lord is with us. When we have confidence in Him and believe in His love, we have peace deep within us, even in the midst of external conflict and pain. The saints, many of whom experienced much suffering and persecution, were able to endure with hope and even had joy because they had the peace of Christ in their souls.

What about peace in the world, peace on earth? It may seem like an unattainable goal. As disciples of Jesus Christ, we are called to be peacemakers. It’s one of the Beatitudes of Jesus. Peacemakers in our families and local communities, in our nation and in our world. I think we can say that peace is our Christmas duty. At Christmas, we pray for peace on earth, a prayer which also should include us asking God as St. Francis of Assisi did: “Lord, make me an instrument of your peace.”

On this night, let us remember in our prayers all those millions of people who suffer the ravages of violence and war, including so many who have lost their homes and are now refugees, so many children and families for whom there is no room in the inn. May we open our hearts to them and ask the Holy Family, which had to flee the violence of King Herod, to bless them with love and hope!

The song of the angels on that first Christmas is a song that has never gone silent. The beautiful hymn “Silent Night” has been sung for 200 years. The song of the angels heard by the shepherds has been sung for 2,000 years. It resounds ever anew at the celebration of Our Savior’s birth. It resounds tonight and will resound until the end of time. “Glory to God in the highest, and on earth peace to those on whom His favor rests.”