On Thursday evening, June 15, the Christ Child Society of South Bend opened a special exhibit about its programs with a ribbon-cutting and silent auction at the History Museum in the Oliver Mansion. Originally started in 1947 by Rosaleen Crowley, the South Bend Chapter has served over 220,000 children in its 70 years, offering brand new coats, shoes and clothes. One of 44 chapters nationwide, 440 members volunteer countless hours filling a need in their local community with love.

The Christ Child Society was founded in 1887 by Mary Virginia Merrick in Washington, D.C. “Nothing is ever too much to do for a child,” she often said. Her care and attention to the children’s physical and spiritual needs was remarkable: In fact, Merrick’s case for canonization has begun and she is now a Servant of God.

Merrick passed this love for each child — as if they were the Christ Child themselves — to Kathleen Giblin of Washington, D.C., who in turn shared this mission to love with her three daughters, one of them being Rosaline, or “Puddy.” Together they would go to a department store in the early 1900s in New York City and be shown clothes available for sale. One day Puddy noticed that her mother was selecting layette baby clothes and excitedly asked if her mother was expecting again. Giblin explained that they were for another new baby in Washington D.C.; that is, for the CCS. 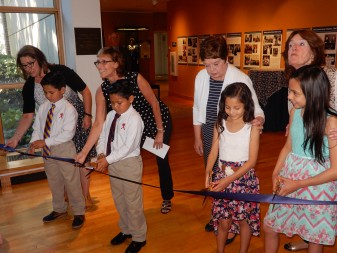 Children from St. Adalbert School, South Bend, which benefits from the Christ Child Society, participate in a ribbon-cutting at the opening of an exhibit at The History Museum that celebrates the society’s 70-year history in the city.

Tragically, Giblin died when Puddy was only 8 years old. Her father, however, continued to bring the girls to visit Merrick as they were growing older. He also played a critical role in CCS history, as he insisted that Puddy attend Trinity College for a “broader education.” There she both studied abroad and became best friends with her roommate, Patricia.

After they graduated, Patricia became engaged to Patrick Crowley. Puddy was to be in their wedding, in Chicago, and took the train out from New York. However, when the conductor called for the South Bend exit she got worried, thinking she had missed her stop in Chicago since she was not familiar with Midwest geography. Little did she know, she would soon return to Indiana.

At the wedding she met the groom’s only brother, Jerome Crowley, and fell in love. They soon married and moved to South Bend, where he became the president of O’Brien Paints. The couple had five children. In 1947 Puddy invited 15 of her friends to serve poor children in their community, remembering her mother’s example, and started the CCS South Bend chapter. The Crowley family then grew by five more children.

Even as a mother of 10, Puddy shared the mission to care for others with her children. Her daughter, Maureen Cahir, remembers licking envelopes and setting up for the beautiful Christmas bazaars and craft events for the organization. Her mother’s work inspired Cahir to join CCS and she became one of their presidents, serving in 1997 for the 50th anniversary year.

At the June 15 exhibit ribbon cutting, five of Puddy’s children, with their spouses and children, came together to remember and honor their mother and CCS legacy of love. Cahir explained, “I think the women who started the foundation would be proud. You see here layers and layers of work, which happens when everyone is responsible and reliable. Our program has been honed…. Truly this is a celebration for everyone. We all want to salute these women who were dedicated to giving with the heart.”

“I’m thrilled with the reality of this exhibit. Years in the making, Beth Barrett and others helped to put together an incredible program, truly the evolution of CCS”, Cahir reflected. “Miss Merrick said, ‘As you see a need, you try and fill a need in your community’” she recalled, gesturing to the large crowd and detailed historical display around the room.

Christ Child Society is unique in both how it operates and runs its program. The hallmarks of Catholic social teaching are employed and practiced, but evangelization takes place in action and not word. Each child is greatly respected when they visit for their yearly new winter coat, hat, scarf and mittens, as well as uniform and pajamas. They are allowed to select and try on coats, not just handed one. The donation rooms are well-organized and kept meticulously cleaned and neat. The volunteer CCS members are genuinely compassionate and caring as they serve each child.

This innate, caring attitude and belief in the human dignity of every person is evident in its work. There are no membership hours to fulfill, just what each person can offer to serve. The Christ Child Society receives no government or United Way funding, solely operating on the generosity of the local community. In 2016, their clothing budget was $300,000, and 100 percent of fundraising profits support under-resourced children. This year, over 4,000 at-risk children in St. Joseph County will receive the care of CCS through 10,000 volunteer hours. These types of numbers are unique in the nonprofit world.

For more information or to join the Christ Child Society, visit www.christchildsb.org. The exhibit of CCS at the History Museum will be open to the public through the summer.