The move to a new home always has challenges, but when the new home has two locations, life can get complicated. Father Osman Ramos, FM, and Father Alven Fabiolas Salada, FM, however, seem to be settling into their two new parishes with grace. 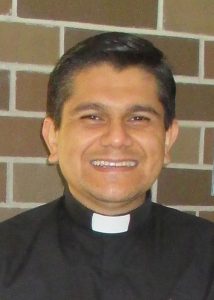 The priests, who are members of the Franciscans of Mary from Madrid, Spain, are new at St. Gaspar del Bufalo Parish in Rome City and St. Joseph Parish in LaGrange. Father Ramos will pastor both parishes, while Father Salada will serve as parochial vicar at both. 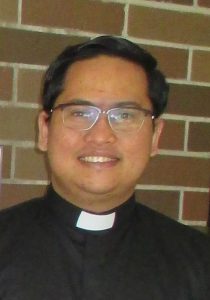 The two priests began their assignments on June 18, moving into the rectory at St. Gaspar. They bring their love of the Lord, the Blessed Mother and a spirituality of gratitude with them.

“We love the Lord like Mary loves the Lord,” Father Ramos said. “And we love the Church as St. Francis loved the Church.”

Although founded in 1988 in Madrid, the community follows in the footsteps of St. Francis of Assisi, who in the 13th century heard the voice of God speak to him, saying, “Francis, repair my Church.”

Their order is also known as the Missionaries of Gratitude. The priests explain that in a world focused on consumerism, it is too easy to forget the gifts that God gives.

“Our medicine for our sickness of consumerism is gratitude. Not only do I thank God with my words but with my acts,” Father Ramos said. “We can be generous with our Lord, our Church, our family and our friends.” 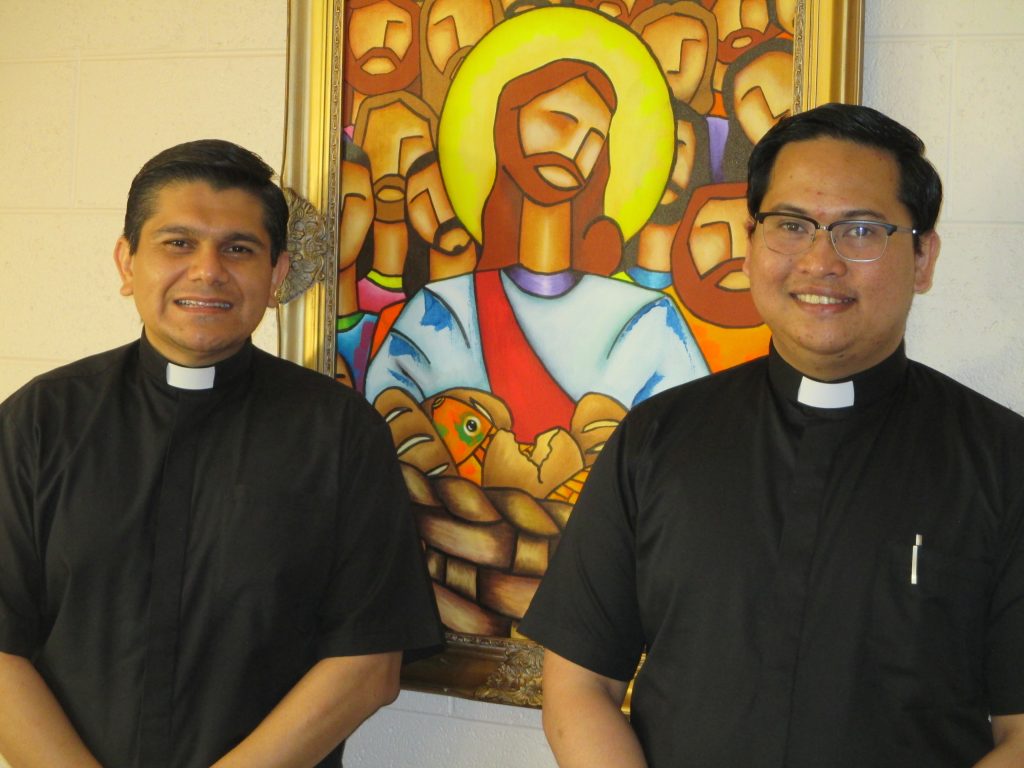 A native of Nicaragua, Father Ramos joined the Franciscans of Mary and was ordained to the diaconate in March 2016. He was ordained a priest in June 2016 in Guatemala. He has served in the community’s parish in Madrid and as a teacher at Franciscan of Mary Seminary.

The youngest of three children, he describes his parents as “very, very Catholic,” which he believes was a great influence on his vocation to the priesthood.

His parents remain in Nicaragua, while his siblings have moved to Panama — a move he would like for his parents to make as well.

Before entering the community, Father Ramos was a teacher of Hispanic literature. “My dream was to teach at a university. That was about to happen when I learned about the Franciscans of Mary.” After spending a week in Guatemala learning the ways of the community from the founder, Father Santiago Martin, he chose the path to the priesthood.

Father Salada felt the first nudges toward a priestly vocation when he was an altar server in third grade. “I had a passion for wearing the chasuble that the priest wore. I wanted to be like that.” He continued serving at the altar through high school.

An accomplished pianist and organist, he studied music in Russia before returning to his native Phillipines. He had completed a master’s degree in theology with a concentration in mission before deciding to give up music and focus on working in a hospital run by surgeon Sister Eva Maama, who is considered the Mother Teresa of the Phillipines.

“One day I saw the founder of the Franciscans of Mary on EWTN. He said that if anyone was interested in the community, to email him,” Father Salada said.

He emailed Father Santiago and two weeks later received an invitation from him to come to Madrid to learn more. He was ordained to the diaconate in Guatemala in July 2018, and to the priesthood in January in the Phillipines.

The second of three children in his family, Father Salada’s older brother is a mechanical engineer in Baltimore. His sister is studying nursing in the Phillipines, where his parents live and work. “They are very happy that I will be in the United States,” he added.

Although he has been in this country only a month, he said he already is finding himself at ease in the American culture. “After all, the Phillipines was colonized by Americans — so we are familiar with the ways.” 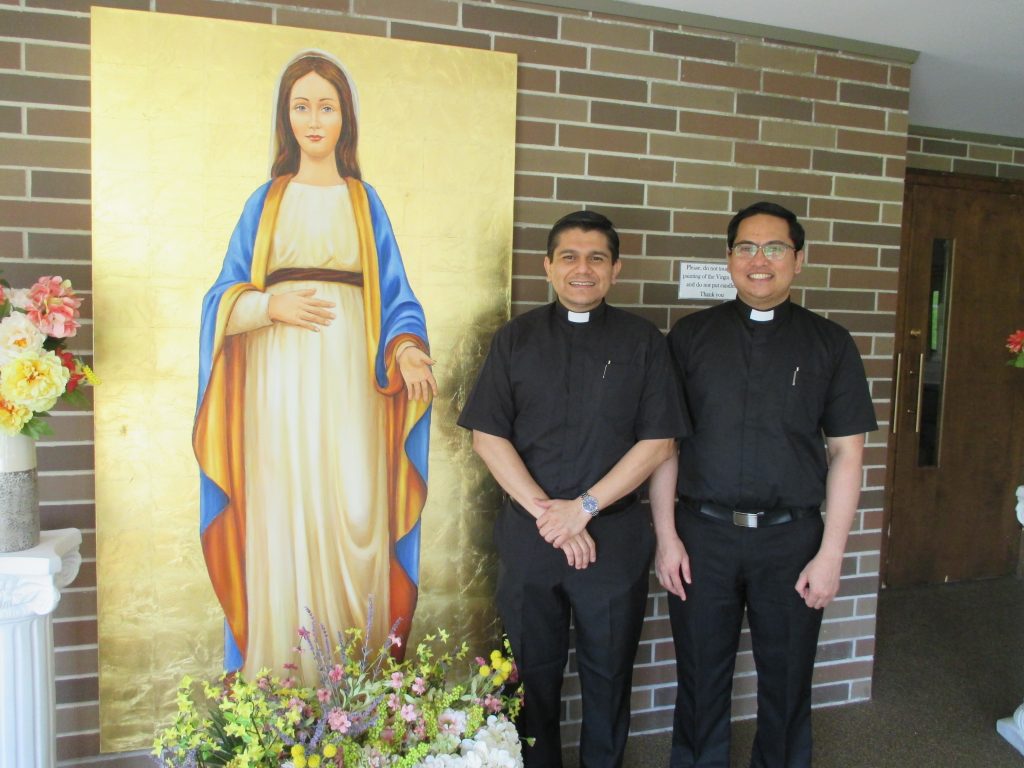 Father Osman Ramos, FM, left, and Father Alven Salada, FM, the new pastor and parochial vicar at St. Gaspar del Bufalo Parish in Rome City and St. Joseph Parish in LaGrange, stand before an image of Mary that depicts the mission of the Franciscans of Mary community, calling attention to Jesus in her womb with her right hand and beckoning people to come to him with her left. The life-size painting was a gift to the Franciscans of Mary priests and hangs in the gathering space at St. Joseph Parish in LaGrange.

Explaining the spirituality of gratitude of the Franciscans of Mary, Father Salada said that their mission is to teach others to be thankful. Their daily life includes joining together for morning and evening prayer, as well as the rosary.

The sacraments are key to their ministry. In addition to celebrating the Eucharist daily, they will have confessions available before every Mass in both parishes.

“United with the Pope and the bishops, it is important to celebrate Mass, to provide beautiful liturgies for the people,” he added.

Part of the ministry is taking care of their own household, as Mary cared for her home in Galilee. “We clean our house ourselves. We cook our own food. We wash and iron our clothes. These are ways for our sanctification,” Father Ramos said.

The communal sharing of prayer and daily chores is part of living as brothers in community much as the apostles did, he explained.

The two priests recognize they have come from two different cultures to yet another culture, but believe that the common language for all is love.

Bishop Kevin C. Rhoades invited the community to come to the Diocese of Fort Wayne-South Bend after learning about them last year. The two priests and Father Martin came to Indiana in January to discuss helping in parishes here. After visiting the two parishes where they might serve, they accepted the bishop’s invitation.

In an email, Father Martin said, “We are very happy and grateful to Bishop Rhoades for the trust and welcome he has given us, as well as to the other people – the vicar general especially – who have shown us love and helped us to take the first steps in the diocese.”

In addition to the parish in Madrid, Franciscans of Mary minister in parishes in Chile, Guatemala and Coatesville, Pennsylvania, near Philadelphia. Father Ramos said the young community consists of 12 priests and 20 seminarians, one of whom is studying in Rome.

The community also has a lay component called “schools of gratitude” that is present in Europe as well as the countries of North and South America, and in Sri Lanka in Asia.

The Franciscans of Mary received pontifical approval from Pope Benedict XVI on March 25, 2007, the Feast of the Annunciation of the Lord, the day on which Mary said her “yes” to the incarnation of Jesus. The presentation of the decree took place at the Vatican on June 26, 2007, the feast of the community’s other founder, St. Josemaria Escriva.

The priests are eager to see their ministry flourish in the two parishes. Both love music, and with Father Salada’s talent on the piano and organ and Father Ramos’ singing voice, they hope to make music a part of their work.